Bishop Pilla, who led church in Cleveland for 25 years, dies 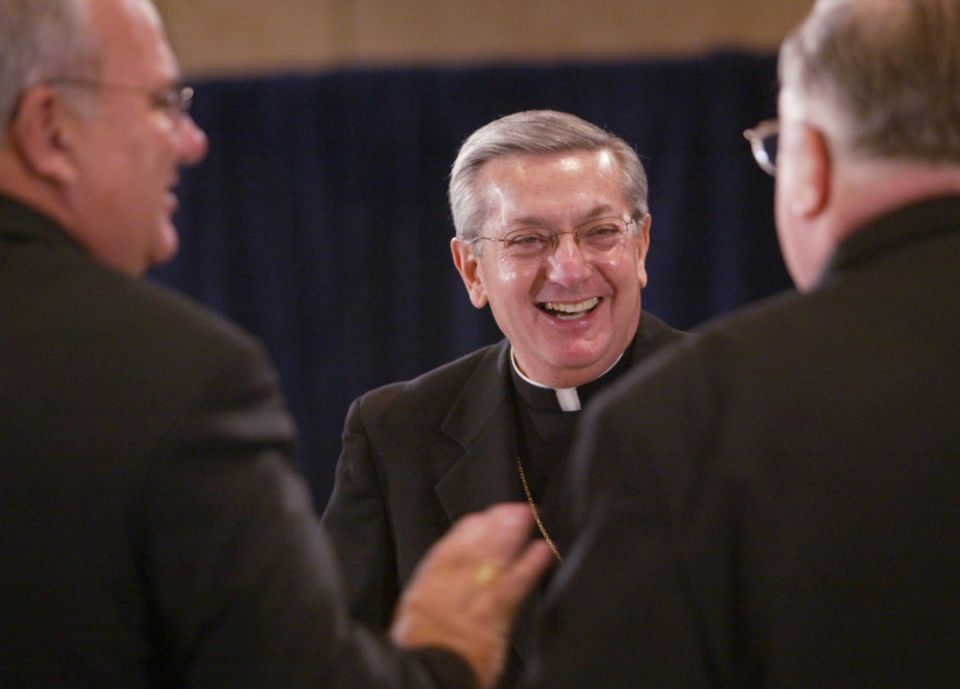 In this 2004 file photo, then-Cleveland Bishop Anthony Pilla smiles as he talks with other U.S. bishops at the start of a U.S. Conference of Catholic Bishops' meeting in Washington (CNS photo by Nancy Wiechec)

Bishop Edward Malesic of Cleveland announced Pilla's death in a statement, saying the native Clevelander died at his home. No cause of death was given.

Since being installed as Bishop of Cleveland in September 2020, Malesic said he came to know Pilla "as a very warm, kind-hearted and deeply faithful shepherd, always dedicated to the people of the diocese."

"He was generous with his time and sharing his knowledge and concern for the diocese with me," Malesic said. "As a leader in the national church, Bishop Pilla was an inspiration and example to me throughout my priesthood and in my years as a bishop.

"I felt so welcomed by him when I came to the Diocese of Cleveland, a church that he loved so much. As a leader in the community and a friend to so many, he will be greatly missed."

Pilla's love of his hometown and desire to serve people of all faiths and backgrounds became a hallmark of his 25 years as the spiritual leader of the Cleveland Diocese.

Friends and colleagues recalled Pilla as a humble man, whose love for the church was foremost in his life and guided his desire to build bridges among people throughout the diocese's eight counties that spanned rural, suburban and urban communities.

"He was Pope Francis before there was a Pope Francis," said Tom Allio, who worked with Pilla for three decades as director of the Diocesan Social Action Office.

"He was a champion for social justice and peace. No one loved the people of Northeast Ohio more than Bishop Pilla. He did everything he could to bring people together," Allio told Catholic News Service.

Not one to seek attention, Pilla became one of Cleveland's most powerful voices for peace and reconciliation through the partnerships he built with business, neighborhood groups and interreligious leaders. His Church in the City initiative sought to build ties among parishes in the inner cities and outlying areas of the diocese.

Allio described how Pilla's vision for the church's role as building connections and addressing injustices led to the diocese -- and Pilla by extension -- gaining a national profile.

In 1990, he became the conference's treasurer, its vice president in 1992 and its president in 1995. He also was a member of the Pontifical Commission for the Cultural Heritage of the Church at the Vatican.

Days after he led the bishops' fall 1997 general assembly, Pilla had his first health challenge as he underwent a quadruple bypass surgery. Shortly afterward he was diagnosed with a staph infection, which sidelined him for three months. Then in 1999, he had prostate surgery.

Born Nov. 12, 1932, to Italian parents, Pilla grew up in a working-class neighborhood of Cleveland. He was ordained to the priesthood in 1959. He served in parish ministry and joined the faculty of Borromeo Seminary in Cleveland in 1960. He was named rector of Borromeo in 1972 and appointed secretary for services and religious personnel of the diocese in 1975.

Pilla's tenure also was marked by challenges posed by clergy sexual abuse as revelations of wrongdoing by priests and shortcomings of church officials in dealing with the priests became known nationally and locally. He apologized and met several times with abuse survivors. Later he described the abuse crisis as the most painful of his time as bishop.

Revising the U.S. bishops' agenda for their upcoming meeting