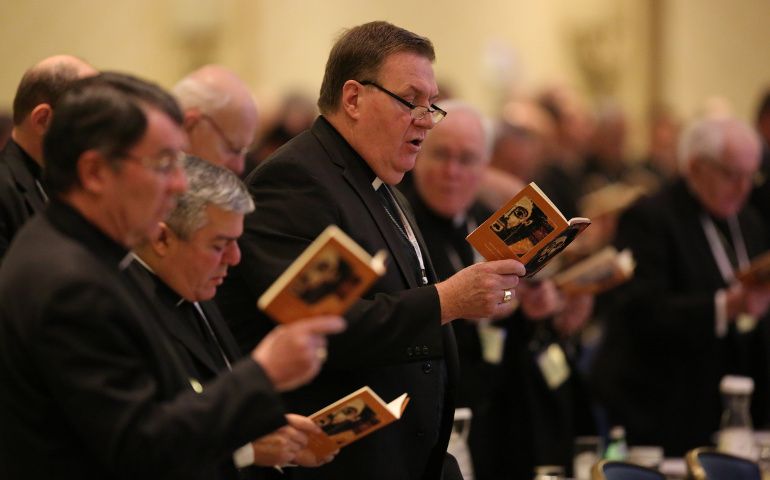 A new strategic plan adopted by the U.S. Conference of Catholic Bishops Nov. 15 during its fall general assembly reflects the efforts of Pope Francis to establish a more merciful and accompanying church, said the archbishop who led the planning process.

The plan, adopted by a vote of 199-4 with two abstentions, will govern the work of the conference and its committees from 2017 through 2020. It takes effect in January.

"We have adapted these priorities to coincide with the priorities of Pope Francis," Archbishop Gregory Aymond of New Orleans and chairman of the bishops' Committee on Priorities and Plans, told the assembled bishops before their vote.

The plan incorporates the theme "Encountering the Mercy of Christ and Accompanying His People With Joy" in setting five priorities: evangelization, marriage and family life, human life and dignity, vocations, and religious freedom. In total, the five priorities identify more than 740 individual projects to accomplish during the next four years.

Cardinal-designate Joseph Tobin of Indianapolis, who recently was appointed archbishop of Newark, N.J., asked where in the plan might be concern for the environment and people who are experiencing the negative effects of climate change.

"It is more urgent than ever given the possibility that the new (presidential) administration is not going to be interested in the issues Pope Francis is interested in," Tobin said.

Aymond responded that the plan's work on the environment, climate change and a response to the needs of people on the margins of society worldwide falls under the human life and dignity priority.

In that section, one of the areas addressed includes teaching and advocating about what the pope has described as integral ecology, "emphasizing environmental degradation and its impact on the lives of the most vulnerable."

The plan also calls for the U.S. church to move from a "silo approach" to ministry as expressed through the USCCB committees to deeper collaboration and cooperation in service of each bishops' ministry.

"Committee chairmen and committee members will need to make sure we stay on track," Aymond told the assembly.

The plan, more than a year under discussion by the bishops through their committees, subcommittees and an ad hoc committee, stems in large part from Francis' message to the bishops when he visited the U.S. in 2015.

The 28-page document offers an overview of the plan and outlines several specific areas to address under each priority. Much of the plan was developed to support individuals of all ages as well as families as people go through daily life and to encourage actions that carry out what is described as "missionary discipleship."

Another passage in the plan stresses that it charts "a path of hope for the people in need of a loving embrace as they face the challenges of the world."

Further, the document states, "The USCCB strategic plan exists to serve the mission of evangelization entrusted in a particular way to each bishop; it is the tool the U.S. bishops rely upon to prioritize, organize, optimize and resource good works which will allow the conference to fulfill its mission."

Two major events are expected to help achieve the priorities including the national Convocation of Catholic Leaders scheduled for July 1-4, 2017, in Orlando, Fla., and the V Encuentro for Hispanic Latino Ministry in 2018.

Thousands of Catholics are expected at each event to discuss, learn, pray and act on ideas to strengthen the church at the local level and inspire new leaders to take on the challenges posed by modern society.

The strategic plan also mentions that the early projects being undertaken will help the bishops as they prepare a pastoral letter on race relations that is planned for the 50th anniversary of the death of civil rights leader the Rev. Martin Luther King Jr. in 2018.

In his presentation Nov. 14, Atlanta Archbishop Wilton Gregory, as chairman of the USCCB Task Force to Promote Peace in Our Communities, urged his brother bishops to issue the statement on racism sooner than scheduled, because of the racial turmoil that has affected many of the nation's communities after police shootings of African-Americans. The archbishop also said such a statement would help address postelection tensions across the country.