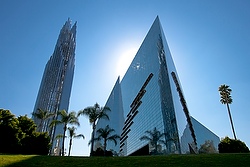 Even by the depressed metrics of Southern California's real estate market, the Roman Catholic Diocese of Orange negotiated a pretty sweet deal when it purchased the iconic Crystal Cathedral, the longtime pulpit of the Rev. Robert H. Schuller and backdrop to his popular "Hour of Power" television broadcasts.

Not only did Catholics get a national landmark designed by the renowned architect Philip Johnson, but Bishop Tod D. Brown wasn't even the highest bidder: Schuller and the board of the proudly Protestant megachurch, opted to take Brown's $57.5 million offer over a $59 million pitch from Chapman University because the bishop would keep the campus as a place of worship.

"A true miracle!" exulted the diocese's top lawyer, Tim Busch, when the unexpected deal was announced.
But divine intervention -- or at least "an exceptionally gifted architect," as one anxious churchman put it -- will now be needed to transform this temple of suburban evangelicalism into a Catholic sanctuary that will make the cathedral a real bargain and not a liturgical white elephant.

That won't be an easy task, given the disparity between traditional Catholic worship requirements and modern Protestant sensibilities. The challenge of redesigning the Crystal Cathedral's interior was central to the cost-benefit analysis that was driving the Orange diocese's calculations throughout the process, according to church officials familiar with the deal.

The officials did not want to be named because the sale will not be finalized until Dec. 30.

In fact, Brown was initially cool to the idea of buying the Crystal Cathedral, which was $50 million in debt when it filed for bankruptcy last year. Brown, who wanted to leave a new cathedral as part of his legacy, was only gradually won over by aides and business advisers.

Some of the bishop's hesitation stemmed from the fact that while the 2,800-seat Crystal Cathedral was a relative bargain, the diocese does not have much cash on hand. The diocese will need to launch a major fundraising effort that could total $100 million, and would entail the sale of other property in order to cover the $57.5 million price tag, as well as several million more that will be needed for renovations and hefty maintenance costs.

But the opportunity was too good to ignore.

For one thing, the Crystal Cathedral's price tag was a lot less than it would have cost to build a new cathedral from the ground up. The Diocese of Orange -- now the 10th largest in the nation, with 1.2 million Catholic souls -- was facing construction costs approaching $200 million on a lot half the size of the Crystal Cathedral's 31-acre campus.

And for those who may wince at the assertive modernism of the Crystal Cathedral's glass design, the reality is that any new cathedral would likely have followed a similar style. Just look up the coast to Oakland's glass-and-steel Cathedral of Christ the Light, which was dedicated in 2008.

Similarly, lingering concerns over the cost and size of the Cathedral of Our Lady of the Angels in Los Angeles -- nicknamed the "Taj Mahony" after its visionary, retired Los Angeles Cardinal Roger Mahony -- also played into the decision to make the Crystal Cathedral deal work.

"This was a no-brainer from a business perspective," said a churchman familiar with the purchase, who also declined to be named as negotiations continue.

But even after the deal was sealed, there was another hurdle looming: the Vatican had to sign off on the deal, and it was far from a foregone conclusion. Just as the deal was coming together, it was revealed that Pope Benedict XVI was setting up a new Vatican office to vet the construction or purchase of major new churches around the world.

That posed a special challenge because the goal of the commission is to ensure that new cathedrals, unlike some recent designs, are not "buildings composed of cement cubes, glass boxes, crazy shapes and confused spaces (that) remind people of anything but the mystery and sacredness of a church," as Vatican watcher Andrea Tornielli put it in his story on the new body.

To some, the Crystal Cathedral, which was completed in 1980, would fit that unflattering description. But after a series of exchanges with the Orange diocese, Rome finally gave its approval -- two weeks after Brown had won the bidding war.

Now comes the hard part: transforming the Crystal Cathedral from a theaterlike atrium complete with Sony Jumbotron screens into a Catholic cathedral where priests will celebrate Mass with incense and reverence.

Brown already said he has "no intention to change the exterior" of the famous building, but he also conceded that it would require "critical design upgrades" inside to make it "suitable for a Catholic place of worship."

Some of the Crystal Cathedral's critics -- and there are many -- wonder if that can work.

In a blog post at U.S. Catholic magazine, journalist Megan Sweas questioned whether any renovation could sufficiently sever the cathedral's ties to Schuller's feel-good, made-for-television approach to ministry.

"The space could benefit from a sprucing up, but I hope the diocese goes further than that," Sweas wrote, adding: "How can the Catholic Church make the space its own while respecting what came before?"

One local priest who supports the purchase of the Crystal Cathedral said he is hoping for the best -- but also preparing for the worst: "This could be a liturgical home run," he said, "or a complete disaster."

Near the rumble of the 7 train, Queens parish and pastor endure the pandemic

Father of boy killed in bombings grateful for 'thoughts and prayers'