Call to Action keynote speaker addresses grace on the margins 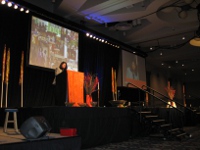 Jamie Manson speaks at the Call to Action conference.

Ten years ago, Jamie Manson was just a young attendee at her first national conference of Call To Action, a Catholic church reform group. This Nov. 4, she was a keynote speaker, kicking off the weekend to rousing applause.

Manson brought to light for young and old something some didn't know existed: the church among people, the church on the margins.

"If we continue to think creatively outside of the institutional church, we will discover the myriad ways that we are already church -- in our work, in our families, in our volunteering, in our communities," she said. "We must discover all of the ways in which we bring the very life of God into our world. We must discover all of the ways that we are doing the traditional work of the church, even if it is well outside the walls of the institution."

Older attendees commented on the higher number of young people in attendance at this year’s Call to Action conference and how good it was "to see a young person speak." Call to Action hosts a national conference the first weekend in November every year.

Manson is a writer based in New York with a degree from Yale Divinity School. As a lay minister, she has worked extensively with New York City’s homeless and poor populations. A frequent speaker and retreat leader, she is a regular homilist for the New York City chapter of DignityUSA, and has served on the board of the Women’s Ordination Conference.

Manson's column on the NCR website, "Grace on the Margins," derives its title from her first column, in which she talks about her desire to be a Roman Catholic priest and the exclusion she faces because of her gender.

"Our stories," Manson said Friday night in front of about 2,000 conference-goers, "define us as a community."

Along with sharing her story of being on the margins and finding God there, she mentioned those who have been punished because of their support of women's ordination.

In a story that "reshaped" Manson's theology, Manson spoke of Sister of Charity Louise Lears, who a few years back was forced out of all her church ministerial roles and placed under a severe interdict because she supported women's ordination.

"On the first Sunday after she was placed under interdict, Louise Lears decided to attend Mass," Manson began. Lears wasn't going to go up for Communion, but her mother beckoned her to follow.

"Louise did not ask to receive Communion, but simply walked by her mother's side. Louise's mother took Communion, broke it, turned around and gave it to her daughter. After witnessing this, Sr. Louise's sister went and did the same. Seeing what was going on, many other parishioners, one by one, also broke their bread and gave it to Louise. By the end of Communion, Louise's hands were filled with fragments of the Eucharist. After the Mass was over, as the family was standing in the back, Louise's mother said to her daughter, 'I was the first person to feed you, and I will feed you now.'

"In that moment, Louise Lears' 85-year-old mother revealed more about the love of God, more about the heart of the Gospel, more about what makes a church true, than the entire hierarchy seems to have been able to reveal in quite some time.

"There is so much I love about that story. But what I take away most is this one particular reality. It took being on the margins for Louise's mother and her parish family to realize that the power of God was working sacramentally through them. It took being marginalized to recognize the church that they already were, regardless of the hierarchy's vain attempts to starve Louise of the body of Christ."

Manson's story starts when she was 14, when she felt called to the priesthood, she said, but was always ignored because of the impossibility of a female Roman Catholic priest.

She carried on. She earned a master’s of divinity degree at a Protestant divinity school and was hired as a pastoral associate at a Jesuit parish in New York City "noted for its ministry to the poor as well as the gay and lesbian community."

The parish had an "upstairs church" that was the sanctuary itself, where Mass, confessions, weddings and baptisms took place, and "downstairs church," an auditorium found directly below the church where, each Sunday afternoon, more than 900 men and women received food, clothing and toiletries.

In the downstairs church, her "gender and sexual orientation never seemed to create barriers."

"The poor reached out to me, whether on instinct or impulse, and asked me to pray for them, with them and over them," she said. "Their longings were basic and bodily: to be touched and listened to and looked at with love."

Nothing about her seemed to matter to them, she said, except that she was present.

"I was feeding people, and I, too, was being fed. And I began to realize that this really is all that Jesus asks of us: that with our bodies we become bread for one another. I began to recognize that downstairs church really was an authentic church, too."

She told the audience not to "forget that the margins are a holy place, too. ... This is where we often see most clearly the face of God."

The early Christian church, whose members faced persecution but remained committed to creating a church among themselves, "sharing meals, sustaining one another through their fears and anxieties; modeling their teacher Jesus by reaching out to those most afflicted in their society. That was church," she said.

"The gospel stories sustained them. These narratives reminded them that Jesus, too, was marginalized by the political and religious leaders of his time. These accounts also reminded them that if they wanted to see Jesus' face, all they had to do was reach out to the margins."

Many people in the United States don't identify with a religion anymore, Manson said, but that doesn't mean that they are in any less of a need for community, meaning and values.

Young people especially are doing the work of church but "would never even think to call their work 'church,'" even though, Manson said, it is the "work mandated by the Gospels."

But as they do this work, many lack the sense of how to build community and keep it, which is vital to spiritual health and support, she said.

She called on the older generations not to use their time "fighting a self-destructive institution," and instead help younger generations "find meaning and spiritual development in a rootless world."

The younger generations also would benefit from those who have lived in religious life for decades who could teach "about the importance of meditations and retreats for fostering strength and endurance, and they could guide them on the importance of community to uphold and support them."

Liberation from the margins of the church is a goal, she said, the same way "we would seek liberation for others who live under oppressive political, social or cultural forces."

For some, liberation will mean staying in the church and continuing the fight, she said. For others, it will be "creating visionary church communities outside the walls of the institution."

Whatever path of liberation one chooses, she said, "[W]e must not overlook the grace of dwelling with God on those margins. Because it is being on the margins that allows us to face of God at work in our world. The margins orient us, they keep us accountable. They tell us if we are getting too close to the center of power.

"Most importantly, the margins remind us Jesus' truest and deepest calling: Feed one another. They remind us of a lesson so beautifully preserved in the story of Louise Lears' 85-year-old mother: The more church institutions and hierarchies continue to starve us, so much greater is God's call for us to use our bodies to be bread for one another."

More from Call to Action: