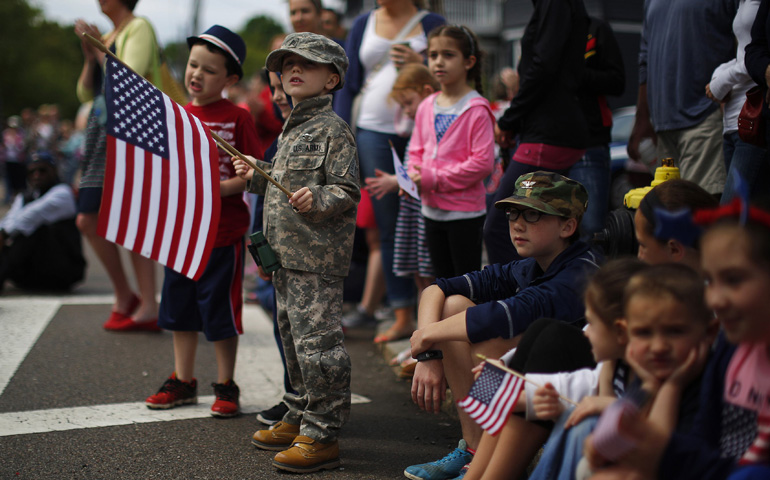 Children watch a Memorial Day parade in Boston on May 26, 2014. (Newscom/Reuters/Brian Snyder)

I always feel conflicted on these military-based American holidays. I love my country. I marched in and still cry at the parades. My dad was a World War II veteran. But I abhor war.

I chaired the national board for Peace Action for many years and once met with generals at the White House to plead for an end to land mines, these horrible gifts of war that keep on giving years after they are planted. We educated people about missile defense systems and the bloated military budget that steals food from the people.

Today, I work with people who have survived war all over the globe and who have lost their families, homes and countries because of it. And I think that the act of war has completely outlived its usefulness as a way for the human family to solve its conflicts.

War today is so dangerous and the weapons we have available to us are so horrific that in using them, we could destroy the very planet we live on. And war is so costly that it steals food from the mouths of children.

War rages in almost every continent. The psychologists tell us that the warrior spirit is built into the human soul as an archetype, a collectively inherited unconscious idea and pattern of thought, universally present in each of us. Again, this is unconscious, available to all people, across cultures and times. As explained by Steven Pressfield in his book The Warrior Ethos:

The warrior archetype clicks in like a biological clock sometime in the early to mid-teens. We join a gang, we try out for the football team, we hang with our homies, we drive fast, we take crazy chances, we seek adventure and hazard. ...

Something inside us makes us want to jump out of airplanes and blow stuff up. Something makes us seek out mentors -- tough old sergeants to put us through hell, to push us past our limits, to find out what we're capable of. And we seek out comrades in arms. Brothers who will get our backs and we'll get theirs, lifelong friends who are just as crazy as we are.

The warrior spirit is among us and it needs full expression. War and military service have given the warrior the opportunity to express the archetypal spirit. And the societies we have created across time and across the globe have required warriors.

In every society, throughout the last 5,000 years of human history, we have needed protection, for our lives, for our lands, our flocks, our stuff. When these are threatened, we have called on the warrior to serve us, to protect us. The warriors have created a circle of protection around the circle of society. We have sent them to fight for us.

We will bury you in sacred red mud to leach your sorrow and pain from you. We will love you back from your fear and guilt and shame for what has happened. We will give you a home, a flock or garden to tend. We will give you time to refresh yourself in nature, by a stream fishing, or a sacred journey hiking in the mountains. We will hold you while you cry and rage away your grief. And when you are healed, you will be able to teach, you will be able to be with our children again, you will become our elder, our spiritual warrior, and we will bless you.

But this has all changed in the modern world of war. First, society's circle is so big and wide, and the sheer numbers of people who need protection along with land, flocks and stuff are so great, that the sheer numbers of the warriors that are needed and who then must come home to be healed overwhelm even the best of intentions and the best of systems. So many wounded and not enough resources to go around.

Second, society is not of one mind anymore that the warrior is being sent for the true good of us all. I have heard it said that the first casualty of war is truth. Our leaders have said we are going to war to protect us from communism, as in Korea or Vietnam, or from weapons of mass destruction, as in Iraq. But in today's wars, the protection of society looks more like the protection of global business interests -- of minerals, timber, oil and land that belong to others.

The largest crack in this covenant with the warrior in my time began with the Vietnam War. The soldiers came home, waiting to be loved back from the brink of madness. Instead, they found a populace divided, angry at each other, and this populace simultaneously wanted to hoist the returning soldiers up on shoulders or spit on them.

In either case, the soldiers were not healed. They were an object to be held up to the opposing side, and they have become more spoils of war. Veteran survivors of this and every subsequent war have been the victims of post-traumatic stress disorder more than ever before.

This was different for my dad when he came home from war in 1945. My dad was a Navy man. He signed up several months before he graduated from high school and shipped out to basic training and the South Pacific so quickly that his mother had to accept his diploma for him. The year was 1943, and the U.S. was mad for its servicemen and servicewomen -- they were warriors for us all, heading off in their shiny uniforms to keep us safe for democracy, to rout the Germans and the Japanese, Hitler, Mussolini and the Emperor, from their dastardly deeds.

The world was on fire. My dad became a signalman on a battleship called a destroyer. He was in the water, off the coast of Japan, when the bombs dropped.

I don't know what he saw. He never talked about it, at least not at home. He had a few items made of Japanese silk. That, and a photograph of him in uniform with his signal flags, was all I knew of his life in the South Pacific. What I saw, seven years after the war, was that he became an ardent workaholic. He smoked two packs of unfiltered cigarettes and drank enough alcohol every day just to take the edge off.

I have since learned that these three things -- substance abuse, workaholism and silence -- are some of the milder signs of PTSD for returning warriors. It is a new revelation to me, one that I found as I wrote this, that my father's early death at the age of 36 was from a stress-related illness.

PTSD is a loss of soul. It is being stuck in hell and not being able to return. It comes from doing things that your brain tells you that you must do, but that your heart is telling you not to do. The return from war requires a time of healing. And a society that does not heal the wounds of its warriors, that does not fulfill the social contract that we make with them by sending them off to do things for us, will find that the wounds of war will grow at home.

I think we are seeing this in the decay of our cities, in increased alcohol and drug addiction, in our lack of resources available to meet the needs of the human family, in the crumbling of our confidence in our governments.

So what do we do with the deeply ingrained warrior spirit in a time when war is no longer a viable answer to human conflicts? When war no longer protects the people and addresses the truth, but rather feeds the already too full bellies of those who benefit from war? When the rest of us are left to clean up the mess, settle the refugees, live with the estranged drug addicts, watch our dads work themselves to death, spend our decreasing resources on public relations campaigns that teach us to hate?

What if, instead of hating other humans and going to war with them, we turned the warrior spirit to the task of cleaning up polluted waters? What if instead of recruiting soldiers for war, we recruited and trained a platoon of young adults to care for the homeless men, women and families in our cities?

What if we put that warrior spirit to work with teenage children, teaching them the thrill of standing up against racism across the globe? What if we had love brigades, teaching understanding and reaching across the divides of stereotypes?

What if we sent the warrior spirit to Haiti, or Louisiana, rebuilding homes after a hurricane, putting out the fires that rage in forests and cities? What if we figured out ways to build beloved communities, using the irrational, wild, passionate spirits that currently have only the choice of going to war for a job?

[Beth Broadway is the executive director for InterFaith Works of Central New York. The original version of this reflection was given at St. Lucy's Church, Syracuse, N.Y., in May 2014.]

A version of this story appeared in the May 22-June 4, 2015 print issue under the headline: Can the warrior spirit find new expression?.