Cardinal who praised cover-up bows out of DC Latin Mass 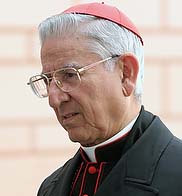 The main celebrant of a solemn Traditional Latin high Mass slated for Saturday at the Basilica of the National Shrine of the Immaculate Conception has agreed to step aside following objections from sex abuse survivors and others.

Cardinal Dario Castrillon Hoyos was named in French press reports last week for praising French Bishop Pierre Pican of Bayeux-Lisieux in a 2001 letter for refusing to denounce one of his priests who went on to be sentenced to 18 years in jail for raping a boy and abusing 10 other young men.

The Bethesda-based Paulus Institute, sponsor of the Mass, said April 21 that it was in the process of seeking another bishop to celebrate the Pontifical Solemn Mass and it was confident that one will agree. “However, in any event, a beautiful, dignified Traditional Latin Mass will be celebrated at the National Shrine of the Immaculate Conception” and “will be the first time in nearly a half century this has occurred.”

“The Paulus Institute regards all sexual abuse as tragic and a heinous sin and supports Pope Benedict’s fight to rid this disease from the Church. It stands on the side of every victim of clerical sexual abuse and earnestly desires to bind up the wounds done to their human dignity, to vindicate their civil and canonical rights, and to help them in the restoration in Christ of all they have lost.”

“To that end, The Paulus Institute supports the directives by the Supreme Roman Pontiff and the United States Conference of Catholic Bishops that all bishops should report crimes of sexual abuse to the police in accordance with the requirements of civil law. However, the Paulus Institute is not competent, nor does it have the facts, to form an opinion about the about recent media reports concerning Cardinal Castrillon.”

The Traditional Latin Mass is to honor Pope Benedict on the occasion of his five-year inauguration anniversary as pope. Cardinal Castrillon Castrillon-Hoyos was reportedly approached to celebrate the Mass because of his special experience in celebrating the Latin Mass and his efforts under Pope John-Paul II and Pope Benedict XVI in encouraging the traditional form of the Mass.

Cardinal Castrillon's letter resurfaced in the coverage of recent disclosures of sexual abuse by priests. He wrote it when he was head of the Vatican's Congregation for Clergy.

"I congratulate you for not denouncing a priest to the civil administration," Cardinal Castrillon wrote to Bishop Pierre Pican of Bayeux-Lisieux. "You have acted well and I am happy to have a colleague in the episcopate who, in the eyes of history and of all other bishops in the world, preferred prison to denouncing his son, a priest."

Speaking in Murcia, Spain April 17, Cardinal Castrillon-Hoyos confirmed the text of the letter, adding also that Pope John Paul had seen it and “authorized me to send it to all the bishops”.

SNAP, the Saint Louis-based Survivors Network of those Abused by Priests said April 20 that it had asked Pope Benedict “to forbid Castrillon-Hoyos from celebrating the Mass.

“When wrong-doers like Castrillon-Hoyos get rewarded by the Catholic hierarchy, church employees everywhere see that wrongdoing is sanctioned,” SNAP stated.

Washington archdiocesan spokeswoman Susan Gibbs told Catholic News Service April 20 she didn't expect Archbishop Wuerl to intercede, because "cardinals have universal faculties and the archdiocese is not a sponsor of this event."

Following the announcement that Castrillon-Hoyos had bowed out, SNAP officials said they were relieved the cardinal wouldn't be the celebrant but expressed disappointment that neither the Vatican nor the Archdiocese of Washington intervened in this matter.

The Vatican spokesman, Jesuit Father Federico Lombardi, said April 15 that Cardinal Castrillon's letter in support of the pedophile priest "is a confirmation of how opportune it was to centralize the handling of cases of sex abuse of minors by clergy under the competence of the Congregation for the Doctrine of the Faith, in order to assure their rigorous and coherent management."

Cardinal Castrillon retired from his Vatican position in 2006. His replacement, Brazilian Cardinal Claudio Hummes, has said instances of priestly sexual abuse need to be brought to the attention of the civil justice system and not just to church authorities.

The Vatican has recently emphasized that under a policy put in place in 2001-2002, bishops are expected to comply with all civil laws that mandate reporting of sex abuse allegations and to cooperate in civil investigations.
Where laws do not mandate reporting to police, bishops are expected to encourage victims to exercise their rights to report the crimes, Vatican officials said.