Carving out a spiritual home 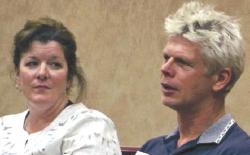 If the local parish is the hub of Catholic life, then members of intentional eucharistic communities might be like citizens of the suburbs -- close enough to still identify with the city but far enough out to avoid a lot of the noise and confusion.

And like the suburbanite who might answer Kansas City, Denver or New York to the question “where do you live,” some community members find “Catholic” an easy designation for their spiritual home when the reality might be more complex.

Indeed, the question of whether such communities should retain contact with the larger church and how closely they should be associated with the institution are continuous points of discussion and tension among the groups of intentional eucharistic communities that gathered in mid-May at the National 4H Conference Center here.

This was the third gathering of these loosely organized communities that can range in membership from fewer than a dozen to several hundred. The first was held 18 years ago in the Washington, D.C., area, which seems to have spawned some of the earliest and strongest communities. Some communities have been around for decades and others developed rather recently, like the group from the Spirit of St. Stephen’s Community in Minneapolis.

According to Henry Bromelkamp and Mary Condon Peters, members of the Spirit of St. Stephen’s, the community had been part of a parish and allowed to worship using inclusive language and other innovations. The community had also done extensive outreach and social ministry. A new pastor ended the separate worship and changed the tone of the parish. Many left, many went to other parishes and many struck out on their own.

Bromelkamp and Peters didn’t know until recently that their new community was actually part of a larger phenomenon, one that had been around long enough and studied deeply enough by sociologists to have arrived at a definition and some telling data. According to literature produced by the organizers, intentional eucharistic communities “are those small faith communities, rooted in Catholic tradition, which gather to celebrate Eucharist on a regular basis. Through sharing liturgical life and mutual support for one another,” the definition continues, “members are strengthened to live Gospel-centered lives characterized by spiritual growth and social commitment.”

The definition further pins the beginning of these communities to the “enthusiasm flowing from Vatican II for a church of the people” and acknowledges that some of the communities were started in parishes while others “were created as alternatives to the parish.” Some function independently while others retain close ties to the church.

Some might declare, as did the man from Denver in a small group when responding to a plea from a speaker to stay connected with the larger church: “I don’t care about the larger church! I don’t care what the bishop says.” Others are more circumspect, claiming their identity relies on some connection to the formal church. Some clearly see the movement as a harbinger of the future while others wonder if such communities are temporary, a stopgap of sorts for a kind of “had it” segment of the Catholic community: those who have had it with a new pastor who changes (usually in a conservative direction) the nature of a parish; or a bishop who imposes new rules or forbids certain speakers in the diocese; or those who have had it because they are generally weary of culture wars, the sex abuse scandal and what they perceive as a general lack of accountability on the part of church leaders.

Whatever the motivation, about 230 people showed up from 17 states and the District of Columbia representing at least 42 communities to discuss their future and the future of the church.

If the communities already had a definition, keynote speaker Robert McClory came bearing a theology, or at least some theological insights from famed Dominican theologian Fr. Edward Schillebeeckx, 94, who might, in this context, be considered the intellectual author of intentional eucharistic communities.

McClory, author of As It Was in the Beginning: The Coming Democratization of the Catholic Church and a regular contributor to NCR, began his talk by relating his experience on an assignment in 2007 for NCR to cover what was occurring in the church in Holland following the publication of a booklet by the Dutch province of the Dominican order. The booklet proposed that because of the priest shortage and the theology of ministry coming out of Vatican II, parishes should consider selecting lay members to preside at the Eucharist.

The proposal actually grew out of experiences with what in most places would be considered wildly experimental liturgies and ecumenical community arrangements. In one instance, Dominicans have for the past 40 years overseen a parish community where a Protestant minister sometimes presides at the eucharistic celebrations and where the priests say they have no idea of the denominational affiliations of many in the congregation.

McClory recounted a conversation he had with some of the younger congregants who told him that he and his family came “quite a distance” to attend the services. Asked if he was a Protestant or a Catholic, the young man laughed and responded, “What you must understand is that the Protestants and Catholics went their separate ways 400 years ago, and now we, their descendants, are coming back together again. Isn’t that all right?”

McClory came home and went on a search for the foundation of what was happening and ran into Schillebeeckx, whom people in Holland said had essentially written the script for what was going on.

Reading Schillebeeckx meant reading a reconsidered Catholic history, particularly on the issue of ordination, which the theologian argues was first a matter of community choice, the community appointed its pastors. Gradually the bishop -- also originally chosen by the community -- became the locus of all authority in the matter of ordination.

Schillebeeckx, said McClory, believes that the church can return to that earlier practice, particularly as the number of priests and opportunities for Eucharist dwindle.

“He says nobody’s got to do this, but we should consider it. He says, ‘Always, this involves a little bit of illegality,’ but we shouldn’t worry about that because the church never got anywhere unless somebody was willing to do a little illegality,’ ” said McClory.

Nor should there be “any sense of ‘us’ versus ‘them’ ” or “a new order” versus “an old order.” Instead, McClory said Schillebeeckx sees that “these two orders will be going along together.”

McClory said the theologian also warns those who seek reform not to complain about the bishops nor expect too much from the hierarchy. Schillebeeckx’s view, according to McClory, is that the bishops “are the caretakers of the old order and they don’t understand what you’re doing. They can’t understand what you’re doing because they are trained to understand the old order. They are the caretakers. The older order is in their bones. You can’t ask them to think outside the box because they are paid by the box.”

McClory made note that in a survey of those involved in intentional communities, 70 percent said they had no or very little interest in the institutional church. He said he thought Schillebeeckx would encourage them to preserve some kind of connection. “The greater body of the church is clearly in trouble today, and I would suspect strongly that it is groups like yours that can point the way to newer, better ways,” he said.

If all of this sounds like an invitation to chaos, an irony is that among the prime organizers of the three conferences is William D’Antonio, a distinguished sociologist and member of an intentional eucharistic community, who has done significant research on Catholic groups and attitudes in recent decades. A former CEO of the American Sociological Association and currently a fellow at the Life Cycle Institute at The Catholic University of America, D’Antonio is one of those who believe intentional eucharistic communities are a leading edge to the future.

In an interview he said he believes communities need to remain connected in some way with the larger church. However, given the priest shortage and other factors affecting parish life, he said, “the church needs us as much as we need the church.”

Another sociologist, Michele Dillon of the University of New Hampshire, reported from surveys taken of members of intentional eucharistic communities that the group’s profile holds few surprises. “You’re mostly Vatican II, pre-Vatican II generation and, as in the big church, more women than men. You’re highly educated and you have a very strong Catholic background.”

Dillon, who has worked on projects with D’Antonio, said the members of these communities demonstrate “the trajectory of all this Catholic education. It’s obviously very effective.”

In comparison with other groups, she said, intentional eucharistic community members are very similar to the profiles of members of reform groups such as Call to Action and Voice of the Faithful.

In other ways, the members are also very much like other Americans who are disaffiliating with a particular denomination in search of a broader spirituality. She cited numbers in the survey in which 70 percent said the “institutional church is not important to them personally.”

She urged community members to retain attachment to the larger church, a notion that was dismissed by some in the audience who recounted painful experiences with the church.

“Sociologists love institutions because the institutions, we know, are the building blocks of society. It is the institutions that connect us. If I may chide you,” Dillon said, “you all emphasized Vatican II … but sometimes you act as if you are not the people that are part of church.” In their detachment from “the so-called big church,” she said, the groups are actually “ceding authority to the institution.”

While the plea to stay connected to the larger church was made forcefully in several presentations and in smaller group discussions, exactly how to do that was not formally addressed at any length. Many communities maintain connections with the institution because they have priests who regularly preside at eucharistic celebrations. In other cases, members remain active in the social outreach and other work of parishes and dioceses. And in yet other cases, people retain membership in a formal parish as well as a community.

Some, however, see liberation from what they view as overbearing rules and authorities as the end in itself and see little need to continue connection with the larger church.

Parish | Carving out a spiritual home

With vote, bishops may set new tone or 'hunker down'

Archbishop: Catholics should be free to serve with 'eucharistic heart'