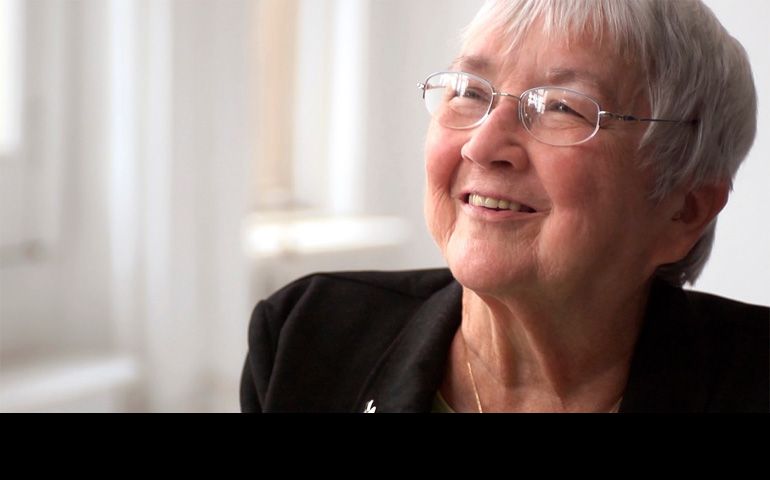 Some 500 Catholic activists from around the globe will converge on Philadelphia for a three-day conference Sept. 18-20 to press for women's rights in the church. They will meet one week before Pope Francis is set to step foot into the city.

The three-day gathering will assess the place of women in church and society and develop plans to advance their Gospel-based justice agendas. Delegates will also assess advances and setbacks within the movement since the 1970s.

Among the speakers at next week's gathering will be veteran Catholic feminists Elisabeth Schüssler Fiorenza and Mary Hunt, Mercy Sr. Theresa Kane and Loretto Sr. Maureen Fiedler. Delegates will also hear from:

"There's enormous energy going into this conference. It will be historic -- a one-of-a-kind gathering," said Deborah Rose-Milavec, executive director of the Catholic reform group FutureChurch.

Women's Ordination Conference co-executive director Kate McElwee told NCR she hopes the meeting will help "mainstream the conversation" of women's ordination by claiming it as a justice issue. The conference theme is "Gender, Gospel, and Global Justice."

The issue of Catholic women's ordination has not gone away, despite efforts by the Catholic hierarchy to bury it for good. The Women's Ordination Conference is one of the reasons the issue has stayed before the U.S. public.

Official Catholic teaching forbids women from being ordained priests. Citing centuries of tradition, it holds this is God's will. Church canons call for stiff sanctions against those who participate in the attempted ordination of a woman.

Catholic feminists say they find no theological substance in teachings that exclude women from the priesthood. The reform-minded Pope Francis, who has pushed for change on many fronts, has dismissed the ordination possibility. "The church has spoken; that door is closed," he has said.

As the world, especially the West, has moved toward gender equality, a male-only Catholic priesthood is increasingly unacceptable to Catholic feminists, many of whom express ambivalent feelings toward their church -- and church reform. They wonder aloud how much energy should they put into reforming their recalcitrant institution when other pressing peace, justice and environmental needs require attention.

However, Catholic feminists -- including some who have largely forsaken institutional reform -- continue to applaud the work of younger women who have taken on the ordination issue.

"Someone once said to us that as long as WOC stays alive, it has done its job," Kane said, referring to institutional efforts to stop the spread of a "subversive" idea.

Another Mercy sister, historian Mary Jeremy Daigler, has spent many years researching women's ordination. She wrote Incompatible With God's Design: A History of the Women's Ordination Movement in the U.S. Roman Catholic Church, published in 2012.

Says Daigler: "It is arguably the longest active, geographically widespread reform movement in the history of the church."

She says there is a large body of historical and archaeological research that credibly puts the earliest Christian ordinations of women at about 125 A.D.

Despite the longevity of the movement, which she dates back 20 centuries, and more recently to 1911 in Europe, "each generation hears it as a brand-new issue."

This is because they don't hear anything about women's ordination in their parish pulpits, she said. "On the other hand, because of the contemporary indifference to or anger with the Roman Catholic church, many women called to ordination have simply walked away," she added.

Asked how she sees the future of the movement, she responded: "In view of the longevity of the issue, I am utterly confident that it will have a future."

The movement's current leaders are "extremely creative, energetic, tech-savvy and committed to the issue," she said.

"After studying the women's ordination movement for years, I can say I am absolutely certain it will succeed," Daigler concluded.

Hunt, co-founder and co-director of the Women's Alliance for Theology, Ethics and Ritual (WATER) in Silver Spring, Md., has been to each of the seven major Women's Ordination Conference gatherings beginning in 1975. "There will be much to celebrate in Philadelphia," she said.

"Women have grown. The whole church has grown because of this movement. When I look back over 40 years I recall the cavalier manner in which the pioneers were treated, the ridicule, derision, scapegoating and stereotyping they endured. How wonderful they were to have withstood it all -- and against what odds."

Perhaps no other woman is more associated with Catholic women's ordination -- or more universally revered among its proponents -- than is Kane.

In 1979, during Pope John Paul II's first trip to the United States, she greeted him in the Basilica of the National Shrine of the Immaculate Conception. In a short address, she asked him to open "all church ministries" to women. She will be one of the foremothers honored during the Philadelphia assembly.

Asked how the women's ordination movement has changed over the years, Kane recalled fondly the excitement generated by Vatican II in the mid-1960s. "There were women observers at the council. In private meetings they brought up the idea of women's ordination and some bishops were quite receptive."

The first time Catholic women's ordination advocates met, in Detroit in 1975, they did so with the wind of Vatican II reform at their backs. It was also one year after 11 women had been ordained priests in the Episcopal church (NCR, July 18-31, 2014). It was a time of hope for change. That gathering led to the official formation of the Women's Ordination Conference.

The U.S. movement gained momentum in the 1970s and '80s, Kane said, singling out the creation of Women-Church Convergence, a coalition of feminist organizations that banded together in 1983 to press the women's justice agenda in the church.

Early on, women religious were more involved, Kane recalled, but over time, the Women's Ordination Conference became increasingly lay-directed. Kane has been a board member and adviser through most of the organization's history.

Women religious view women's ordination from varied perspectives. Kane sees it as a rights and justice issue, saying ordination should be open to all women. It's untenable, she says, that any woman who feels called to ordination should not be allowed to follow that call.

Other women religious caution Catholic sisters to stay out of the church's clerical ranks. Among those expressing this hesitation is Immaculate Heart of Mary Sr. Sandra Schneiders. An influential theologian, Schneiders says clergy and religious serve distinctly different roles in the church and women religious should not mix these roles.

She has written about what she sees as "the fundamental tension between an intrinsically hierarchical vocation and a prophetic one."

In the 1970s and '80s, it was not uncommon for Catholic bishops to sign documents supporting women's ordination. That period ended in May 1994, when Pope John Paul II issued Ordinatio Sacerdotalis, in which he wrote the church "has no authority whatsoever to confer priestly ordination on women."

That document was intended to end discussions -- but it only spurred them on. The situation prompted Cardinal Joseph Ratzinger, then prefect for the Congregation for the Doctrine of the Faith, and later Pope Benedict XVI, to attempt to shut down all talk of women's ordination. In November 1995, he issued a short letter, Responsum ad dubium, affirming that John Paul's decree required "definitive assent."

Neither statement stopped the women. In fact, they seemed to have the effect of strengthening determination. With ordination no longer an immediate possibility, Catholic feminists went back to work, digging deeper into church history and developing feminist theology.

Theologian Hunt recalls those years as especially fruitful. "We were not siphoned off into ordination like so many of our Protestant sisters were," she said. "Many women continued to do spadework theologically into what to do next. That saved us from the fate of ordination."

In 1992, Schüssler Fiorenza, a Harvard Divinity School theologian, published But She Said: Feminist Practices of Biblical Interpretation. In that book, she coined the word kyriarchy, defining it as a social system based in domination and oppression. This represented a new step in feminist thought, a new context that would soon find its way into critiques of the Catholic church.

When the Women's Ordination Conference met in 1995 in Arlington, Va., to celebrate its 20th anniversary, delegates heard Hunt, Schüssler Fiorenza and theologian Diana Hayes encourage delegates to stay clear of ordination and instead take up other feminist ministries. Those talks challenged the organization, forced re-examination, and moved it to widen its base and focus.

At the 2005 Women's Ordination Worldwide gathering, Schüssler Fiorenza elaborated her critique, saying that by "co-opting the rites, vestments, selection practices, titles of the hierarchy, we risk to re-inscribe them. … If we do not reject ordination into clergy privilege and sacred structures of domination, WOW could re-enforce the second-class citizenship of the majority of church women, the so-called laity."

The women's ordination story took another notable step in June 2002, when seven women, in violation of church canons, were ordained priests in a ceremony on the Danube River in Europe. One year later, two of the seven were ordained bishops, assuring a continuation of this line of priests and complicating the ordination movement.

Divisions on tactics aside, Kane says women are stronger than ever in support for full equality in the church. "I don't go any place that women don't talk about it. Even the more traditional women will say, 'We could have a Mass if they let those women be ordained.' "

The numbers are consistent across Catholics in ages ranging from 18 to 65. These attitudinal changes have occurred as the numbers of priests have fallen sharply, causing many parishes and schools to close.

Much like other Catholic nonprofit reform groups, the Women's Ordination Conference operates from a modest financial base. Fierce episcopal opposition limits access to U.S. parishioners who might otherwise offer it financial support. Meanwhile, the organization has built international ties and visibility. Co-executive director McElwee is stationed in Rome (where her husband, Joshua, is NCR's Vatican correspondent).

Delegates to next week's Women's Ordination Worldwide gathering are expected to come from 17 nations in Latin America, Europe, Africa and Asia.

Fiedler (who blogs for NCR) has also been an ordination advocate dating back to 1975, when she attended the Detroit gathering.

Asked what she thinks might come out of the gathering, she replied: "I think the people who organized this conference hope it will light a fire under Francis, that it might send out a signal to him that this is an issue that needs to be addressed."

She added that Francis "is too intelligent to simply disregard what's going on around him."

[Tom Fox, NCR publisher, will be in Philadelphia covering the Women's Ordination Worldwide conference. Reach him at tfox@ncronline.org or follow him on Twitter @NCRTomFox.]

Women’s ordination: WOW delivers its message to the world

Five stabbed at Hanukkah celebration in latest attack on Jews

Lessons from Nonna's generation: She recycled long before it was today's trend