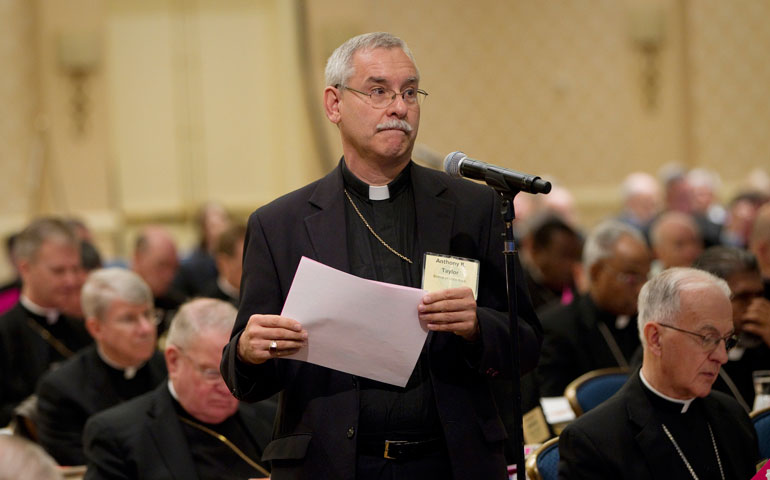 The April announcement that a Catholic health care system was buying one of four health insurance providers in Arkansas was met with widespread praise. The health care system is committed to serving all, including the poor, and it has the financial resources to expand coverage to the entire state, a move that could reduce the cost of all insurance coverage.

Although the state insurance commissioner approved the purchase May 1, a cloud hangs over the deal. Bishop Anthony Taylor of the Little Rock diocese has expressed reservations that government regulations imposed on insurance providers may not comply with "Catholic moral teaching" -- an apparent reference to requirements that insurance plans cover contraception and abortion to save the life of a woman and in the case of rape or incest. Taylor has asked the Vatican's Congregation for the Doctrine of the Faith to weigh in.

The Catholic health care system in question is CollabHealth, a wholly owned subsidiary of the Colorado-based Catholic Health Initiatives (CHI), one of the nation's largest non-profit systems. CollabHealth has purchased QualChoice Holdings of Little Rock, the parent company of QCA Health Plan and QualChoice Life and Health Insurance Co. As a result, Catholic Health Initiatives will control the insurer, the second-largest in the state.

Across the country, health care systems are looking for ways to improve the quality of care while cutting costs. Some systems own hospitals and clinics, medical practices that employ doctors, nursing homes and rehabilitation centers. Owning an insurance company is not much different from the health maintenance organizations that blossomed in the 1980s.

"The critics call it the 'narrow network,' " said Robert De Vita, executive director of the Common Ground Healthcare Cooperative in Milwaukee. "I prefer to call it an integrated system."

De Vita has run Catholic and non-Catholic hospitals and health care systems and is currently on the board of PeaceHealth, a Catholic system with facilities in Alaska, Oregon and Washington.

"Combining the financing with the delivery of services makes you [health care systems] accountable," he said. "A health care system that doesn't do that will be gone before long because they will not be able to compete."

But the bishop's concerns are different. A Catholic health care system "obviously must operate in a manner consistent with fundamental Catholic moral teaching," Taylor said in a statement released April 29.

He said that while the leaders of Catholic Health Initiatives were "acting in good faith," he has submitted a formal dubium -- the Latin term for "doubt" -- asking the Vatican's doctrinal congregation for clarification.

"To my knowledge, that congregation has not previously addressed the moral and ethical issues presented by an acquisition such as this one," Taylor wrote. "A Dubium is not a challenge, nor is it necessarily a negative response. Rather, it is expressing a 'doubt' regarding an unresolved issue, which is in need of clarification or resolution by the appropriate Vatican congregation."

Taylor also wrote that the acquisition bears little resemblance to the controversial proposed purchase of another Arkansas Catholic hospital -- Mercy Hospital Hot Springs -- by Capella Healthcare, a for-profit Tennessee-based company that operates another hospital in Hot Springs. The deal required Vatican approval, as well as the go-ahead from the Federal Trade Commission. After a year of negotiations and "continued challenges," both sides agreed to drop the purchase agreement in 2013 before receiving formal rulings from the FTC or the Vatican.

Richard Feinstein, then director of the FTC's Bureau of Competition, called the collapse of the Mercy merger "a victory for local businesses and patients." In a June 2013 statement, Feinstein said that the commission had serious concerns that the merger would likely have caused anti-competitive harm. If it had not been dropped, the commission was prepared to challenge the transaction.

Taylor had opposed the Mercy sale to Capella because he questioned the for-profit's willingness to continue serving the poor and elderly, and he was concerned about the potential for performing abortions and sterilization procedures at the merged hospital.

He expressed his opposition in a letter to the Vatican's Congregation for Institutes of Consecrated Life and Societies of Apostolic Life. That congregation's approval was required because the sale meant the transfer of a religious order's assets valued at more than $5 million.

The purchase of the insurance company is different because no Vatican approval of the deal is required, Taylor wrote.

Apparently, Taylor has not yet received a response to his query to the doctrinal congregation. It is unclear what impact it will have on the now-complete purchase. He did not respond to emails or a telephone request for an interview with NCR.

Jay Bradford, Arkansas insurance commissioner, said he was "very pleased" with the deal and had advocated for it.

"Right now QualChoice is only available in two of the regions in the state," Bradford told NCR. Catholic Health Initiatives' assets and reserves "will enable them to expand into all seven territories in the state," he said.

Bradford said the stated mission of the Catholic system -- to provide affordable care for all -- will likely have an impact on the other three providers in the state and keep premiums lower.

A representative of the diocese had contacted Bradford's office prior to the April 29 public hearing on the purchase, but no one from the diocese spoke at the hearing and no formal objection was registered, he said.

"There was a representative of the diocese present," Bradford said. "They didn't say anything."

The Little Rock-based St. Vincent Health System operates hospitals in Little Rock, Hot Springs, Morrilton and Sherwood. From QualCare's inception in 1996, St. Vincent was a partner in the operation of the insurer.

QualCare's roots go back to the University of Arkansas, where it was created as a health maintenance organization, an incubator project. St. Vincent was one of a number of participants in the provider network. In 1999, St. Vincent invested financially to become one of QualCare's owners.

Michael Romano, a spokesman for Catholic Health Initiatives, said in an email that elective abortion is not covered by QualCare policies. "Because it is a non-covered service, associated anesthesia and facility charges (if any) and the care of complications caused by the procedure are also not covered."

He said that with pregnancy terminations determined to be medically necessary, the surgeon performing the procedure would have to request pre-authorization with documentation of second opinions from two independently practicing physicians who can speak to the risk posed to the mother's health or life based on the continuation of the pregnancy.

"QualChoice has always complied with applicable state and federal regulations requiring specific levels of benefits and that will not change," he wrote. "Neither QualChoice nor CHI interferes in medical appropriateness decisions between patients and physicians."

But he added: "To the extent mandated benefits conflict with the Catholic Ethical and Religious Directives, QualChoice will institute appropriate administrative practices consistent with the way other Catholic organizations have operated health plans and continue to do so within the Catholic moral tradition."

The federal Affordable Care Act requires that insurance carriers must provide free contraception and abortions deemed medically necessary, but the law exempts religious-based employers from providing such coverage. (A lawsuit brought by Hobby Lobby Stores and Conestega Wood Specialities is pending before the U.S. Supreme Court. The two businesses are attempting to expand the exemption by claiming that the contraception requirement violates the business owners' rights to practice sincerely held religious beliefs.)

Taylor said he will continue to maintain a dialogue with Catholic Health Initiatives until the Vatican decides the matter.

"One of my duties as bishop of the Diocese of Little Rock is to ensure that Catholic entities operating in Arkansas do so in a manner that is consistent with the fundamental moral teaching of the Catholic Church," he wrote.

[Marie Rohde is a freelance writer based in Milwaukee.]

A version of this story appeared in the June 20-July 3, 2014 print issue under the headline: Catholic health system gets into insurance.