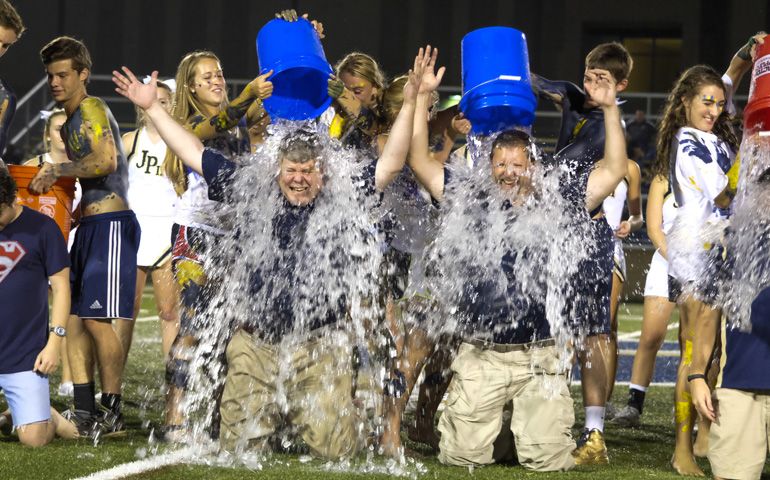 The ALS Ice Bucket Challenge, a major fundraising effort that began this summer to raise money to research a cure for amyotrophic lateral sclerosis, or Lou Gehrig's disease, has left many people scratching their heads.

The challenge involves dumping a bucket of ice water on someone's head and nominating others to go through the same process within 24 hours or make a donation to the charity of one's choice to support further research to treat and cure ALS. The ALS Association, based in Washington, is the largest organization researching the disease.

The challenge went viral on social media. The ALS Association received $88.5 million in donations from July 29-Aug. 26 compared to $2.6 million during the same time period a year ago.

Friends have challenged friends on Facebook and celebrities have joined the fundraising fray. Now with schools starting their new year, Catholic schools across the country have also considered the challenge. But there has been some hesitation, particularly after reports that the ALS Association, which is researching for a cure for the disease, uses embryonic stem cells in some of its research.

Some dioceses have issued statements urging schools that participate to send donations to other research organizations, such as the John Paul II Medical Research Institute in Iowa City, Iowa, which does not use embryonic stem cells in its research.

The Catholic church opposes any research involving the destruction of human embryos to create stem cells. Adult stem cells, so called because they are derived from living human beings, also have promising scientific value but do not require destruction of an embryo. The reprogrammed stem cells can sometimes be used to replace damaged cells.

Carrie Munk, a spokeswoman for the ALS Association, told Catholic News Service in an Aug. 26 email that the organization primarily funds adult stem cell research and is at the end of funding one single embryonic study, which is funded by one specific donor.

She said if someone "is uncomfortable with any type of research we do, they can restrict their gift" stipulating that it not be used in the embryonic stem study or any stem cell research.

In a statement about its research funding, the association said it "primarily funds adult stem cell research. Currently, the association is funding one study using embryonic stem cells, and the stem cell line was established many years ago under ethical guidelines set by the National Institute of Neurological Disorders and Stroke."

An Aug. 20 statement from the St. Louis archdiocese points out: "There is nothing immoral about raising awareness for diseases and ethical research towards curing diseases; there is no reason Catholics can't participate" in the ice bucket challenge. "The key, however, is to ensure that donations from participation are being utilized to support morally licit research."

The statement also explains the church's stance against embryonic stem cell research, saying it is "always morally objectionable because a human person must be destroyed to harvest his or her stem cells."

The archdiocesan statement quotes the Congregation for the Doctrine of the Faith, which said: "The use of embryonic stem cells or differentiated cells derived from them -- even when these are provided by other researchers through destruction of embryos or when such cells are commercially available -- presents serious problems from the standpoint of cooperation in evil and scandal."

The archdiocesan statement urged Catholic participants in the challenge to send donations to the John Paul II Medical Research Institute.

Similarly, New Orleans Archbishop Gregory Aymond told archdiocesan priests and employees in an Aug. 13 email that is "possible to participate in the ice bucket challenge and to do so in a way that is morally acceptable."

"We have received questions on this project. Many people do not realize that some of the research is done with embryonic stem cells, which is against our pro-life stance," he wrote.

The archbishop urged participants in the challenge to specify how their donations should be used or to send their money to charities that do not use embryonic stem cells in research.

An Aug. 20 memo to archdiocesan pastors and principals from the Respect Life Office of the archdiocese of Newark, N.J., similarly urged Catholics considering the fundraiser to be aware of where their money is going or to specify how it should be allocated.

"There is no stigma in restricting your contributions to ALS to research using adult stem cells only or to non-stem cell research," it said.

The statement also encouraged donations to local organizations or hospitals caring for those with a particular disease.

It noted that this particular fundraiser provides a unique opportunity to engage parishioners, staff members and students "in a conversation about the church's position on stem cell research."

The memo urged church leaders to "be present, as Christ wants us to be, to those who may approach us with the idea of participating in a particular fundraising event because someone in his or her family suffers from the disease."

"That person's pain and anguish is very real, and as a church, we should work to ease that burden," it said.