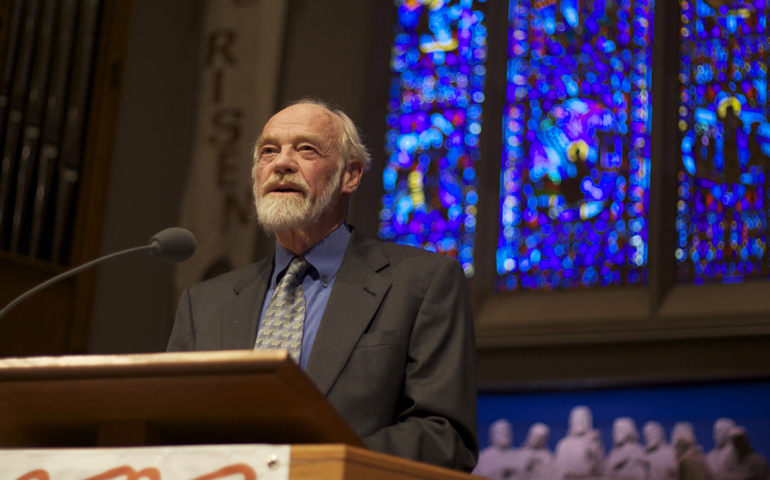 While looking at the readings on the fifth Sunday of Lent as I prepared for our weekly Scripture discussion group, I started with the selection from Paul's Epistle to the Romans. Here's what I read: "Those who are in the flesh cannot please God. But you are not in the flesh; on the contrary you are in the spirit, if only the Spirit of God dwells in you. Whoever does not have the Spirit of Christ does not belong to him ... "

Here we go again, I thought. We'll be trying to decipher what spirit and flesh really mean in this context, etc., etc. So I picked up The Message, a relatively new translation of the Bible I had received, and I read the same verses from Paul: "Focusing on the self is the opposite of focusing on God. Anyone completely absorbed in self ignores God and what he is doing. And God isn't pleased at being ignored ... "

Wham! It was so clear, as if Paul himself had rung the doorbell, come in, pinned me against the wall and said, "Time to get your act together, my brother in Christ." And he wasn't smiling. Our group listened to both versions of Romans at our meeting a few days later, and there was unanimous agreement that The Message carried Paul's message in a sensible, powerful, personal new way.

The partial and complete books have had an amazing reception, with some 15 million copies sold to date, said Don Pape, NavPress publisher. "The contemporary style is so winsome," Pape told NCR, "that people get hooked on it. Its popularity seems to transcend denomination and age. It especially appeals to young college-age groups, artists, singers and songwriters."

Now a Catholic version has arrived, called The Message: Catholic/Ecumenical Edition. It is identical to the original, except that the omitted books have now been included. They are the so-called deuterocanonical books of the Old Testament (including Tobit, Judith, 1 and 2 Maccabees, Baruch, Wisdom, Sirach, and additions to Esther and Daniel). William Griffin, a friend of the original translator and a retired editor at Macmillan Publishers, translated these.

Griffin said he used the Catholic-approved New Latin Vulgate as the basis for his translations. The Latin was no problem for him, he said, but finding English expressions that were both faithful to the Latin meaning and suitable for a contemporary audience was a challenge.

Here is a sample of Griffin's work from the Book of Wisdom: "The unjust ... are slackers not caring a fig for justice or the Lord. Without wisdom or understanding, their life's a bust. ... Their wives don't have a brain in their heads; their children are disasters waiting to happen; their generation -- there's not a good word to say for it."

Related: Bible boom presents many choices for the modern reader, by Bill Tammeus

The creation of this Catholic version, said Pape, was much encouraged by Greg Pierce, publisher of ACTA, a small, Catholic-oriented press in Chicago. When he heard NavPress was considering a Catholic edition, Pierce met with their executives and was authorized to publish the book, all 1,983 pages.

"I discovered The Message by accident some years ago," explained Pierce. "I ran across an art book that contained several incredible images from the New Testament in The Message translation. I was blown away. I began to use it in my writings and encouraged my authors to do the same."

Pierce's enthusiasm was matched by that of Alice Camille, a Catholic author, columnist and educator. "The translators have mined these familiar pages for their original gold, uncovering the humor buried in what normally sounds like church talk," she told NCR. "When I'm reading a passage from The Message, I always say, 'Wow!', 'Shucks' and 'Amen,' not necessarily in that order. It's the difference between reading an account in a newspaper versus hearing it from a good friend who was there."

Commented Franciscan Fr. Richard Rohr on the cover of the Catholic edition: "What an amazing prayer resource for preachers, teachers, students, seekers, and believers. Read and be inspired."

The Message translation is certainly not a literal one. It has been called an idiomatic translation, a paraphrasal translation, a rendering of the Bible using conversational language and figures of speech. Some critics have labeled it a "watered-down," distorted message, even a "comic book" Bible.

As I became more familiar with the book, I began to see that this is not a new "English" translation of the Bible; we have had more than two dozen of these published in the 20th and 21st centuries. The Message is very clearly a modern "American" translation.

That is precisely what bothers skeptics. J.R. Miller, a blogger on biblical matters, presents the general problem: "By updating the Scriptures in modern street language, Peterson removes the historical and religious content, resulting in a book far removed from the day and culture in which it was written."

The man who did the original translation, Eugene H. Peterson, does not dispute such criticism. His intent, he told NCR, was to write using the contemporary, even colloquial idioms of Americans today. He admits he thereby loses some of the historical and cultural flavor of the original writings. For that reason, he said, "I do not recommend that passages from The Message be read at church services, and I feel uneasy whenever I hear it's being used that way."

His translation is not a study Bible, he noted, but rather a "reading Bible," aimed at helping Christians see an old message in a new way or sparking interest in seekers who found traditional Bibles boring.

Peterson, 81, is a retired Presbyterian minister, teacher, university professor, author of some 30 books, and translator living in a cabin in Montana. While pastoring a congregation in Bel Air, Md., in the 1980s, he became frustrated at the inability of the standard translation of the Epistle to the Galatians to arouse his people's concern about problems in society like race relations and the sagging economy. "I got mad," he said. So he got out the original Greek and did his own, more contemporary translation.

Following the introduction, this is how Paul begins in the Peterson rendition: "I can't believe your fickleness -- how easily you have turned traitor to him who called you by the grace of Christ, by embracing a variant message! It is not a minor variation, you know; it is completely other, an alien message, a no-message, a lie about God."

Not only did his version of Galatians open the eyes of his congregation, it was widely quoted and reprinted. Eventually, Peterson wrote a book about the epistle and was contacted by NavPress. They asked him to translate 10 chapters of the New Testament in his style, and he agreed.

His editor was not entirely satisfied with some of his word choices. For example, Peterson substituted the traditional introduction of the beatitudes, "Blessed are you ... " with "Lucky are you ... " The editor, he recalled, said that among some Christian groups "lucky" is associated with "Lucifer." So Peterson stuck with "blessed." In other cases, NavPress accepted many of his more daring interpretations. For example, in the Passion according to Matthew, Jesus announces that one of the 12 is going to betray him. Judas asks, "It isn't me, is it, Rabbi?" To which, Jesus replies, "Don't play games with me, Judas."

Eventually, the editors were so pleased with his work, they asked Peterson to do the whole New Testament. "The Gospels were clear and straightforward," he said, "but the epistles and other books were more difficult because of the use of metaphors and other figures of speech."

Here's how he translated several beatitudes. Instead of "Blessed are the peacemakers ... ", he wrote, "You're blessed when you can show people how to cooperate instead of compete or fight. That's when you discover who you really are and your place in God's family."

This is Peterson's version of Jesus' "salt of the earth" speech in Mathew's Gospel: "Let me tell you why you are here. You're to be the salt seasoning that brings out the God flavors of this earth. If you lose your saltiness, how will the people taste godliness?"

When the editors began talking about the Old Testament, Peterson said he thought, "Maybe this is my life's work." And that's how it's turned out. It took him, he said, almost 20 years to achieve the translation of the entire Bible, though there were intervals when he was invested in theological writing and pastoring. He said he consulted some 80 biblical scholars who pored over his work and made suggestions.

This is the Peterson translation of beloved Psalm 23:

God, my shepherd! I don't need a thing.

You have bedded me down in lush meadows, you find me quiet pools to drink from.

True to your word, you let me catch my breath and send me in the right direction.

Even when the way goes through Death Valley, I'm not afraid when you walk at my side. Your trusty shepherd's crook makes me feel secure.

For Pierce, ACTA publisher of the Catholic edition, the book represents "a once-in-a-lifetime opportunity to present something to younger people that can turn them on to the Bible and to older Catholics that will make them fall in love with it again."

[Robert McClory is professor emeritus of journalism at Northwestern University, and has contributed to NCR since 1974.]

A version of this story appeared in the Aug 1-14, 2014 print issue under the headline: Catholics get The Message in new edition.