A checkup in Rome for the American bishops 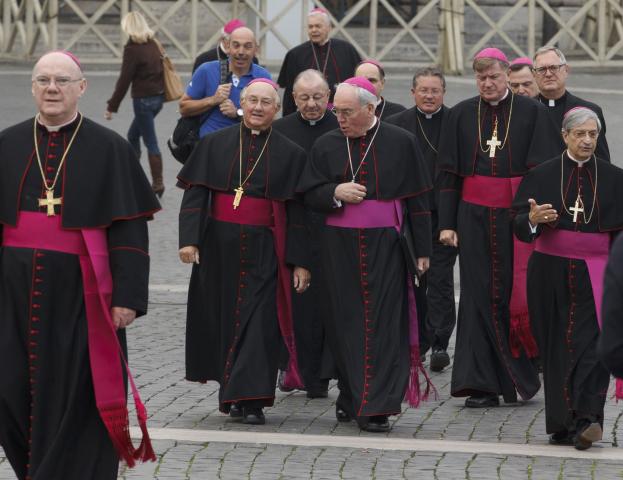 An ad limina visit, the trip Catholic bishops are required to make every five years to Rome, is a bit like a routine physical. It might flag a serious problem, but usually it’s just a checkup covering a wide variety of aches, pains, and ups and downs.

If nothing else, it’s revealing to learn what doctor and patient are thinking about, because it might provide hints of treatments to come.

That’s been the tenor of the latest round of visits by U.S. bishops that began in November and will continue in 2012. Predictably, Pope Benedict XVI’s own priorities -- the push for a “new evangelization,” meaning outreach to lapsed Catholics, and the defense of religious freedom -- have figured prominently. Yet a variety of other issues have also surfaced, including:

The fact that a subject arises doesn’t necessarily signal a policy shift or new initiative, but sometimes papal interest alone can have consequences. For instance, Archbishop Timothy Dolan of New York reported that Benedict asked the Americans questions about immigration, which came across as a sign that defense of immigrant rights is a papal priority.

In other cases, the meetings allow bishops and Vatican officials to iron out their differences. This time around, that’s included a special focus on parish closings.

During 2011, the Vatican overturned or suspended decisions to close churches in several dioceses, including Springfield, Mass.; Allentown, Pa.; and Buffalo, N.Y. The prospect of losing an appeal has alarmed other bishops, who used the ad limina visits to seek clarification.

Archbishop Charles Chaput of Philadelphia told NCR the topic came up in meetings at the Congregation for the Clergy and at the Apostolic Signatura, the Vatican’s top court. Chaput said the Vatican distinguishes between suppressing a parish, meaning taking it off the books under church law, and physically closing a church -- especially if the latter involves selling the church building.

“They sometimes seem to have a European model, where there are a lot of churches without many people,” Chaput said. “Often those churches are subsidized by the government. They don’t really understand why a church, especially a historical church, needs to close.”

Chaput said the Americans tried to explain the costs of maintaining a church that’s not in use, and asked for a “sympathetic hearing” on appeals.

The Congregation for the Clergy is preparing two documents on closings, one to be released shortly and the other later in 2012. Dolan said they should provide “crisper and cleaner and more consistent” guidelines, but that doesn’t mean the bishops can expect a blank check.

“Sometimes the perception of the Holy See is that its job is to protect the power structure of the church,” Dolan said. “Well, they also are very sensitive to the rights of God’s people.”

Before the visits began, Vatican officials said “new evangelization” would be an overarching theme. In a Nov. 26 speech to the bishops of New York, Benedict warned that secularization leads to a “quiet attrition” among church members, and called for “the recovery of a shared vision and sense of mission by the entire Catholic community.”

Benedict stressed the importance of Catholic universities to the new evangelization, especially the formation of younger generations.

On religious freedom, the bishops briefed Vatican officials on the efforts of their new Ad Hoc Committee on Religious Liberty, such as its opposition to proposed federal mandates requiring insurers to provide coverage of sterilization, contraception and abortion.

Cardinal Séan O’Malley of Boston said Vatican officials share the bishops’ concern that religious freedom is being interpreted as an individual right, without acknowledging the rights of a religious institution to “live its life and implement its teachings.”

For the Vatican, religious freedom encompasses not only the political struggles of church-run institutions in the West, but also lethal threats faced by Christians in other parts of the world. Over Christmas, Benedict condemned the bombings of Christian churches in Nigeria, including an assault on a Catholic parish that left at least 27 people dead.

On the sex abuse front, Benedict defended what he called the “honest efforts” of the church to deal “appropriately and transparently” with the crisis. He said such efforts can help the broader community cope with “the devastating consequences of sexual abuse.”

An ad limina visit provides bishops a chance to form impressions of Vatican departments and officials, and this time several Americans praised the enthusiasm they said they found in the most recent addition to the bureaucracy, the Pontifical Council for Promoting the New Evangelization, under Italian Archbishop Rino Fisichella.

O’Malley, a Capuchin Franciscan, also said he was impressed by the new leadership team at the Congregation for Institutes of Consecrated Life and Societies of Apostolic Life, composed of Brazilian Archbishop João Bráz de Aviz and American Archbishop Joseph Tobin. O’Malley told NCR he was pleased to learn that officials are making the rounds of the headquarters of religious orders in Rome, opening lines of communication.

(In the past, the only time members of religious orders would ordinarily meet congregation officials was if they were summoned to a Vatican meeting -- and, often enough, that meant they were in trouble.)

The first wave of American visits have coincided with media reports suggesting that Benedict is increasingly frail and fatigued. Chaput said that physically, the 84-year-old pontiff is “showing his age,” but mentally he remains on top of his game.

“His perception of what’s going on, his ability to understand and to respond to the questions bishops raised, was truly extraordinary,” Chaput said, calling his session with the pope the best of all his ad limina visits over the years.

“None of that [mental agility] has diminished at all,” Chaput said.

Parish | A checkup in Rome for the American bishops

Getting Catholics invested in the mission