Chicago archbishop: Church should work through social changes together 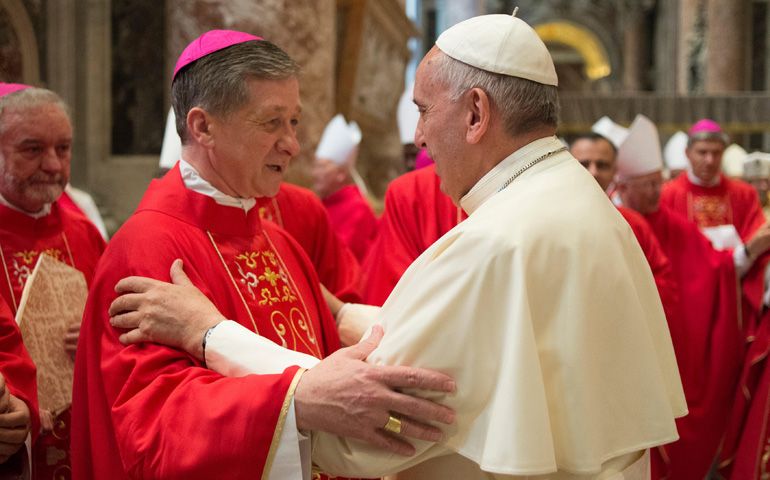 Pope Francis greets Archbishop Blase Cupich of Chicago after a Mass marking the feast of Sts. Peter and Paul in St. Peter's Basilica on Monday at the Vatican. (CNS/Paul Haring)

The U.S. Catholic church should not react stridently following the Supreme Court's ruling that legalized same-sex marriage nationwide but instead should focus on working through the rapid pace of social changes together, Chicago Archbishop Blase Cupich said.

"My concern is that we don't lurch in one direction or another in terms of reaction, but that we really have a sense of serenity and maturity and keep ourselves walking together," Cupich said in an interview with NCR following a special Mass with Pope Francis on Monday.

"I think that's the most important thing," the archbishop said, using the example of a family that discusses issues they face together.

"When they have [a] crisis, when they have something new happening, a good, mature, serene family says, 'OK, take a breath, everybody. We're all in this together. We're going to help each other,' " he said.

Cupich, who was installed as Chicago's archbishop in November, was answering a question in reference to a statement he released Sunday regarding the Supreme Court's ruling.

The archbishop combined two of the court's rulings last week in his statement, praising the decision to preserve subsidies for health care coverage under the Affordable Care Act and calling for "mature and serene reflections" over the ruling on same-sex marriage.

In the statement, Cupich also called for respect of gay people, referring to the Catholic catechism and saying, "This respect must be real, not rhetorical."

"The Church must extend support to all families, no matter their circumstances, recognizing that we are all relatives, journeying through life under the careful watch of a loving God," he said in the statement.

Asked Monday about a difference in tone between his statement and the statements of other bishops -- such as U.S. bishops' conference president Archbishop Joseph Kurtz, who called the ruling a "tragic error" -- Cupich said varying responses from the bishops allow the prelates to learn from one another's experiences.

"We're all different people and come at things from our own experiences and have different responsibilities," Cupich said. "The bishops have never been lockstep on any particular issue, and we shouldn't be. We have to be able to listen to each other's voices."

"I will listen to the voices of people who say things differently than I do because I learn from that," he continued. "And I would hope that would be the case for everybody."

U.S. bishops' meetings involve time for discussion among the prelates for that reason, Cupich said.

"We do learn from one another, and that's why there are the exchanges that we have at our bishops' meetings, when people get up and say things," he said. "If we all are supposed to say the same thing, then we should all just be given a script to read off of rather than being invited to get up and say things and talk about things."

Cupich also said he wanted to speak primarily to Catholics in his archdiocese.

"My hope was to make a contribution to the discussion, but also I wanted to make sure that I spoke to the people that I serve in Chicago, in my archdiocese," the archbishop said.

At the special Mass with Francis on Monday, the pope blessed the palliums for 46 new archbishops around the world, including Cupich and new Santa Fe, N.M., Archbishop John Wester. During his homily, the pope called on the global prelates to live lives "coherent" with what they preach to Catholics in their dioceses.

Cupich also spoke in the NCR interview about his new insights into the pope's mission after meeting Francis in person for the first time Friday; the new ecological encyclical, Laudato Si'; and a recent trip to Ukraine as a part of a U.S. bishops' delegation alongside Kurtz.

The archbishop also talked about how he sees the role of dialogue in his position, saying that discussions with people should involve allowing yourself to be challenged or changed by what the other party says to you.

"I say that when I talk to someone and I sit with them, there are areas in my life that are healed because they bring something new and they always challenge me," the archbishop said. "That's what dialogue is about. It is about being able to, in some way, sit in a discussion with someone and realize that you don't have all the answers and that you can learn."

"I've taught for many years," he continued. "And I've always realized that a good teacher is somebody who goes in the classroom realizing they're going to learn more than they teach."

"That's how I look at various discussions and dialogue with people, especially if they're different from me and come up differently from me," he said. "I think those discussions are not only encounters for healing and being challenged for them, but for me as well."

Francis, Cupich said, is a man "who is trying his best to do what Christ wants him to do."

"He is someone who is not coming in with anything predetermined," the archbishop said. "He's coming in with the sense that Christ is alive, working in the world ... and that our job as bishops, as overseers, is not just to look over how people are doing and to care for them ... but also to have the ability to recognize where Christ is going and leading the church."

"He feels that very deeply," Cupich said. "That's what I take away. He has a vivid, vibrant sensitivity that Christ is doing everything and he is along to watch what's happening."

The archbishop also called the pope's new ecological encyclical -- "Laudato Si', on Care for Our Common Home" -- a "watershed document." He said that in coming years it will be remembered on the same scale as Pacem in Terris, the landmark 1963 encyclical of Pope John XXIII that criticized the global nuclear arms race.

The pope was courageous in addressing the situation of climate change head-on, Cupich said.

"I think the pope had to use those words because the evidence is pretty clear," he said.

"It's one of those things where you know you have to say something because it's true," he said. "And even though people aren't on the same page, you have to wait until people see that it's true and you have to say, 'I'm going to throw caution to the wind and this is the right thing to say and I'm going to let the truth of the ages bear me out.' "

Cupich visited Ukraine for four days in June with Kurtz and bishops' conference staffers. He said he remembered two key moments from the trip: a visit to a refugee camp in Kharkiv and a conversation he had with a man seeking medical treatment for an amputated arm.

The man, the archbishop said, had been trying to secure a visa to enter the U.S. to receive treatment at the University of Chicago Medical Center. Cupich said he had just been informed that the visa request was approved following a request from him and Kurtz to the U.S. ambassador.

"The trip was worth [it] just for that, getting that accomplished, having one thing done for one person," the archbishop said.

"There's a great deal of suffering," he said. "I think it's an untold story in terms of what is happening over there."

"A lot of people in Ukraine want to do their best," he continued. "Young people had their aspirations dashed because they thought that they were going to be able to have a prosperous life without interference from another government. It's been very, very difficult for them."

Parish | Chicago archbishop: Church should work through social changes together

Why black clergy ought not oppose same-sex marriage

Inspired by Pope Francis, Laudato Si' institute at Oxford on a mission to better the world with research

Throwing Catholic charities under the bus