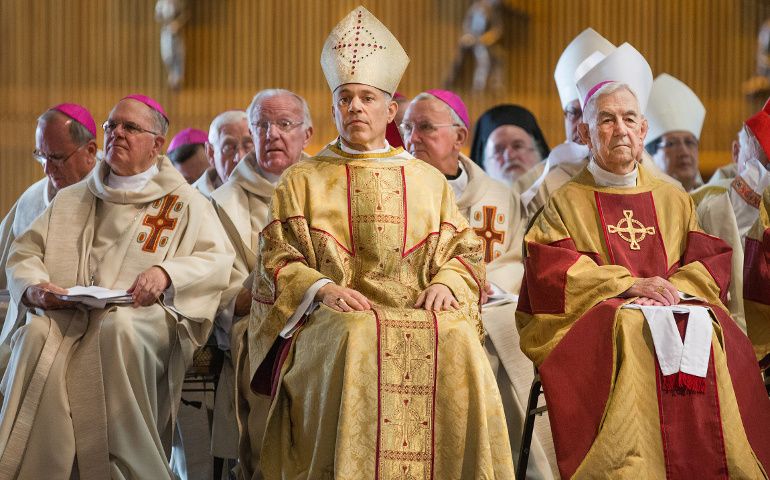 Archbishop Salvatore J. Cordileone, center, and retired Archbishop John R. Quinn of San Francisco, right, look on during Cordileone's installation Mass at the Cathedral of St. Mary of the Assumption on Thursday. He succeeds Archbishop George H. Niederauer, 76, who had headed the San Francisco Archdiocese since 2005. (CNS/Catholic San Francisco/Dennis Callahan)

San Francisco — Salvatore J. Cordileone chose the theme of "rebuilding" for his installation as the ninth archbishop of San Francisco on Thursday.

For his homily, Cordileone, whose appointment drew strong criticism because of his opposition to gay marriage, drew on the example of St. Francis of Assisi, the city's patron whose feast was being celebrated. St. Francis, the archbishop said, "didn't make a new church, he repaired the old one. He built upon it."

About 200 demonstrators, some supporting the city's new archbishop and others opposing his appointment, stood together on the sidewalk outside St. Mary's Cathedral while 2,000 invited guests gathered inside to witness Cordileone's installation.

Both groups held signs proclaiming their messages to those arriving for the 2 p.m. Mass and those driving along one of San Francisco's busiest streets.

"We are with you, Archbishop Cordileone. Defend the Christian Family" read one.

"We all deserve the freedom to marry," read another.

In addition to divergent opinions marriage, there were posters abhorring the sexual abuse of children by priests and signs referring to Cordileone's recent arrest for drunken driving. But there were no confrontations, and an atmosphere of respect, or at least tolerance, prevailed.

More than two dozen San Francisco police officers were positioned throughout the square-block perimeter of the cathedral complex, and each of the three cathedral entrances was carefully monitored by security personnel as attendees presented admission tickets with their names on it.

When Cordileone walked toward the cathedral doors to begin the liturgy, he was flanked by his personal security guard, who has accompanied him to most public events since he became bishop of Oakland in 2009.

The largest group of demonstrators was the 100-plus contingent from the Neocatechumenate, a program of adult faith formation begun in Spain in 1964 that has spread throughout the world. Some members drove from their homes in central California, bringing their children with them. Others came from parishes in the archdiocese. They sang, danced and prayed in Spanish, all to show their welcome of the archbishop and their "support for the church," said one young member from Fresno.

Marge Leonard, a parishioner in the Oakland diocese, joined other members of Pax Christi in expressing concern that the archbishop is "against inclusiveness." She is worried Cordileone is "setting the church back," moving it away from the teachings of Vatican II and the spirit of openness it engendered.

"We are not here to cause trouble," said Sr. Zsa Zsa Glamour, a local small-business owner. "We have no problem with people choosing to be Catholic. What we object to is the archbishop inserting his views into state policies," especially regarding gay marriage.

Cordileone is chair of the U.S. Catholic bishops' Subcommittee for the Promotion and Defense of Marriage. He helped lead passage of Proposition 8, which bans gay marriage in California.

Encouraging those gathered to imitate St. Francis' example of personal holiness, Cordileone said the saint "first and foremost ... began with himself" when seeking change, "knowing that the work of rebuilding ultimately must start from within."

Cordileone repeated that refrain when making reference to his own arrest on drunken driving charges.

"I know in my own life, God has always had a way of putting me in my place in little and sometimes big ways to remind myself of my need to depend on him and to attend to the work of my own rebuilding from within," Cordileone said. "I would say, though, that with the latest episode in my life, God has outdone himself."

Chuckling as he noted that Cardinal William Levada, the former head of the Vatican's Congregation for the Doctrine of the Faith and a former archbishop of San Francisco, was participating in the Mass, Cordileone asked if Levada would keep the previous comment "off the record" as Cordileone was not sure "if really it's theologically correct to speak of God outdoing himself."

Cordileone continued: "I cannot though adequately express my gratitude to you all for the outpouring of love, support, and promises of prayers I received in the wake of the regrettable mistake in judgment I made with regard to my driving, and for which I apologize."

Participating in the two-hour liturgy were Archbishop Carlo Vigano, apostolic nuncio to the U.S.; Archbishops John Quinn and George Niederauer, former heads of the archdiocese; Cardinal Roger Mahony; 40 other bishops; 300 priests; and 75 deacons.

Cordileone will visit St. Francis Parish in East Palo on Sunday to join in the parish's feastday celebration. While the new archbishop had been scheduled to appear in court Oct. 9 on the drunken driving charges, media outlets in San Diego, where Cordileone was arrested in August, reported Friday that Cordileone pleaded guilty on Monday to reduced charges of reckless driving.

Following Cordileone's installation Friday, reports emerged that the bishop for the Episcopal diocese of California, an invited guest for the ceremony, had not been seated as planned.

[Monica Clark is a NCR west coast correspondent. Her email address is mclark@ncronline.org. NCR staff in Kansas City contributed to this report.]