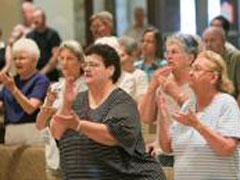 Editor’s note: This article is one in an occasional series about the new missal translation that NCR will publish in the run-up to the translation’s official release in November.

In the U.S., English isn’t the only language into which the new Roman Missal will be translated.

Across the country, deaf and hard-of-hearing Catholic communities and their interpreters are preparing for the November changes thanks to free online resources.

The National Catholic Office for the Deaf served as the launching pad for a series of video clips as preparation and as a reference for the new translation of the Roman Missal into American Sign Language (ASL). The videos, posted in April, are available on YouTube and the Washington archdiocese’s Web site at www.adw.org/service/interpreter_training_newromanmissal.asp. The archdiocese created the videos.

Other deaf apostolates have created training as well, such as Boston, which has its own online training videos at www.deafcatholic.org. In addition to online resources, it provides in-person workshops for Boston Catholics, said Fr. Jeremy St. Martin, director of the office of the deaf apostolate in Boston.

The idea for the video clips on the Washington archdiocese Web site came from Mary O’Meara, executive director for the Department of Special Needs Ministries for the archdiocese. O’Meara grew up going to signed Mass with her father, who was deaf. She also has degrees in linguistics and interpreting from Gallaudet University, a Washington school designed for deaf and hard-of-hearing students.

Often, she said, “those marginalized communities, like the deaf Catholic community or other communities of persons with disabilities, are kind of left in the dust in these big changes that we experience in the life of our church.”

This online resource, she said, prepares them in advance and helps them feel comfortable and familiar with the changes.

Every year, the National Catholic Office for the Deaf has a conference. This past conference, pastoral workers and clergy who work with the deaf Catholic community met, and, O’Meara said, they “were all saying the same thing: We have nothing to prepare us for the changes of the Roman Missal.”

A nonprofit membership organization, the National Catholic Office for the Deaf reaches 5.7 million deaf and hard-of-hearing Catholics, according to its Web site.

Ideas involving DVDs and hosting nationwide workshops were tossed around, but O’Meara suggested they make a Web-based resource to reach everyone. The group decided to make a series of video clips that would be available on the Web, she said.

“The materials that were proposed were to be a draft so that folks across the country could then add the nuances of the signs that are appropriate for their community,” O’Meara said. “Just like anywhere else there are small differences in how to sign things from the East Coast to the West Coast. So we wanted to just have a base model that would be available on the Web, free of charge, so that anyone can go and use that as a starting point.”

After communicating for a few weeks among one another and deaf Catholics, the pastoral workers, clergy and interpreters flew into Washington in March for only three days, spending two of those days gathering the plans together and the third day filming. The Washington archdiocese technology team brought the video clips together and then polished and posted them, O’Meara said.

A Web-based resource can reach every community out there, she said, from big cities such as Chicago with large areas of deaf ministry all the way to tiny communities in Idaho where the next deaf Catholic community may not be for hundreds of miles. For those areas without Internet connection, the Washington archdiocese has been burning the videos and audio and sending them to those who request them, she said.

The free one-stop site acts as a base so people “could talk about the choices, appropriate ASL signs, the use of space, directionality in signs. ... Oftentimes it’s confusing who is speaking because a lot of sign language is very iconic, and it depends a lot on the directionality,” she said.

Each video on the Washington archdiocese site has a person demonstrating the signs that the interpreter would make and that the person in the pew would make, along with the spoken English and closed captions. The videos focus on the common parts of the Mass. It uses American Sign Language and is for use in the U.S. and Canada.

The Web resources contain sign choices based on the liturgical meaning of the particular sign in context, O’Meara said.

“The concept has not changed in the least. ... So a very skilled interpreter is going to be able to take that message and although it might be dressed in different clothing, be able to convey the same message very smoothly without a hitch at all,” O’Meara said.

The word “mystery,” for example, has various definitions but only one spelling in English. The mystery of who stole the cookies from the cookie jar is a different concept than the sacred mysteries of the Catholic faith. It would be incomprehensible to use the sign for “mystery” as in mystery novel to mean mystery in the sense of the sacred mysteries, Boston’s St. Martin said. There are different signs for the different concepts.

The training online is needed to teach people that the concepts haven’t changed, O’Meara said, and eventually everyone will become accustomed “to the new vocabulary choices, and in some areas, the prayers have changed enough that it’s just going to be a different cadence, a different pace.”

For interpreters to keep pace and rhythm, O’Meara said, the Washington resource site has mp3 downloads of the text being spoken. A PowerPoint presentation is also available on the Web site explaining the steps of translation for interpreters and how to translate.

“Our hope is that no one will feel loss for the information,” O’Meara said. “That was truly our hope, that there would be a base camp to go to that is accessible to everyone.”

Where the church is healthy and strong, there is a thriving deaf Catholic community, St. Martin said. The church has reached out to deaf Catholics for a long time -- one can even find examples in canon law, he said, such as Canon 1104, which holds that if people getting married cannot speak the vows, equivalent signs are just as accepted.

The resource is especially for those interpreters who are on their own, who have no pastoral worker in the diocese coordinating sign language interpretations, so that they could access the resources they need for an accurate translation, O’Meara said.

These resources were developed in part so that the deaf Catholic community would not be marginalized or left as an afterthought, she said, but would be “included in the body of Christ as we move forward in the way that our church is looking to approach the liturgy starting this Advent.”

In signs, changes subtle and profound

Like the spoken words at Mass, some of the changes for deaf Mass-goers will be subtle, others more profound. For example, in Eucharistic Prayer I, at the consecration of the wine, the words change from “the cup” to “this precious chalice.”

“Cup” is a relatively simple sign that could also mean glass or pint, but “chalice” has a more formal connotation to it, so one sign for “chalice” outlines the shape of a chalice.