Detroit's Ministers of Service have answered the call for 50 years

by Gary Torgerson
Parish
People
This article appears in the The Field Hospital feature series. View the full series. 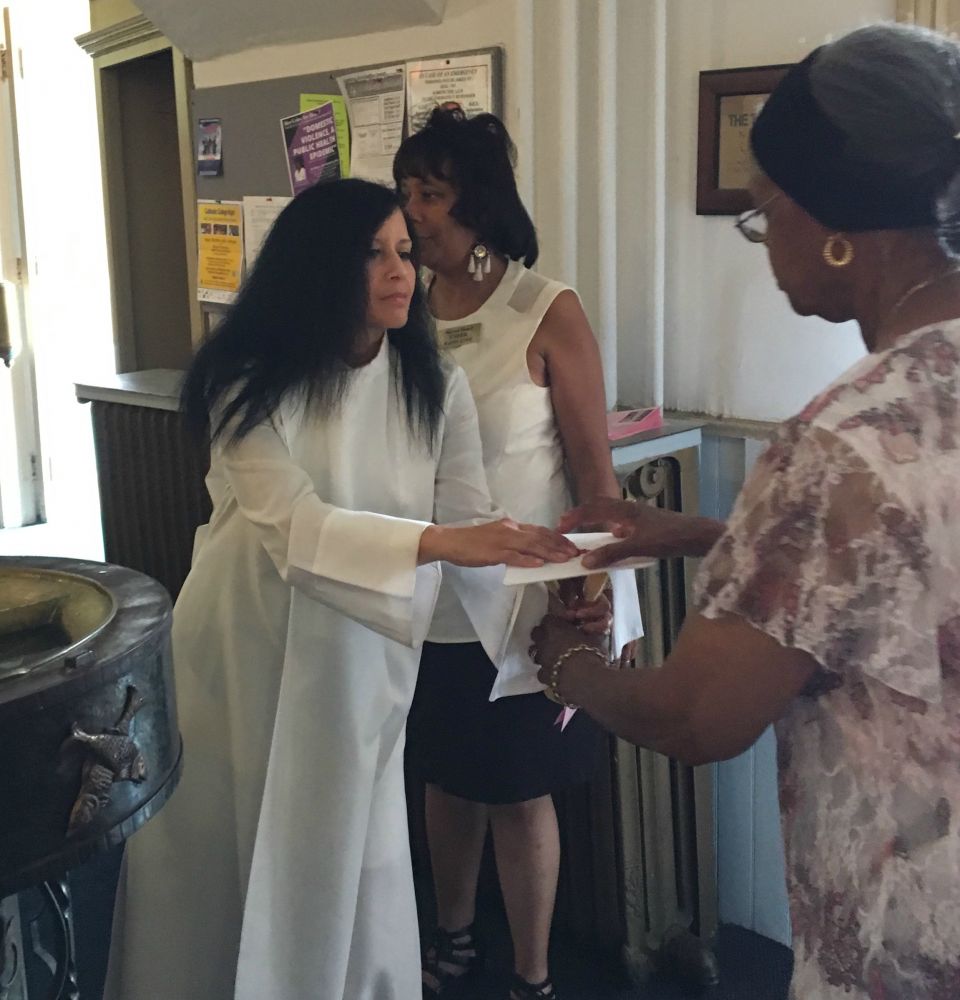 In the aftermath of Vatican II, as laypeople were encouraged to embrace their baptismal call to service, some Detroit East Side parishes took a grass-roots approach to ministry.

In 1969, Al McNeely, then a deacon at St. Bernard parish, was running a community center at the church. McNeely, who died in 2013, was struck by the dearth of black Catholic men in the church. "Black males were not visible," recalled Fr. Norman Thomas, pastor of Sacred Heart Church, "and Al wanted to change that. He wanted black men to be visibly seen as leaders in the church. They were absent."

With the blessing of Cardinal John Dearden, representatives from four parishes — St. Bernard, Sacred Heart, St. Elizabeth and St. Charles — met at Sacred Heart Seminary and formed a group of African American men called Ministers of Service (although the group was open to any race and was not exclusively black). These men would undergo training and then serve as liturgical and social leaders in their respective parishes. Duties were determined by the pastor of each parish. After training at their respective churches, the men were installed as Ministers of Service by the late Detroit Auxiliary Bishop Walter Schoenherr at Blessed Sacrament Cathedral.

"McNeely was intent on forming men to be mentors in the community -- not just at the altar, but in their homes and on the streets, to help the young men in the community to internalize self-respect and self-discipline," recalled Fr. Victor Clore, pastor of Christ the King Parish in Detroit.

Detroit Auxiliary Bishop Donald Hanchon remembers those early years well. In 1972, as a young transitional deacon on his way to priesthood, he was assigned to St. Bernard. He got to know McNeely well.

"There was a Minister of Service at St. Bernard's named Willie Strawberry," said Hanchon. "Al asked me to take Mr. Strawberry along on First Fridays when we would make communion calls. Al told me he wanted me to go with Mr. Strawberry because he was really good at praying and I could learn something from him. And I did. He had such beautiful language. When he prayed he created all these beautiful biblical images, such as, 'Lord we come to you like vessels before a flowing stream.' It was a beautiful thing."

Michael Lofton has been a minister at Sacred Heart since 1991 and says the program has changed his life. "I used to come to church, go to Mass and go home," he said. "One day, one of the ministers pulled me aside and told me I'd make a good minister. I thought the person was crazy. Then a few more made the same suggestion."

A parishioner suggested that Lofton attend a Ministers of Service weekend retreat. "I wasn't enthused about going, but that weekend turned my life around. I became interested in religious study. I told them I would undergo training. I started reading the Bible every day and have never missed a day. The ministry program is very fulfilling. Each day it gets a little sweeter," he said.

Lofton's duties are varied. He assists in the celebration of the Mass, directs prayer services at cemetery burials, teaches Bible class and helps with youth ministry. He is currently taking additional studies at Sacred Heart Seminary.

Shortly after forming the men's group, McNeely formed a women's auxiliary group called the Sisters of Judith at St. Rose Church in Detroit. They did not really complement the men's group and were not looked at in the same way. Some thought that they were simply a nod.

In 1978, Thomas approached McNeely. I told him, "Al, I've got some women who want to become Ministers of Service."

McNeely was reluctant, saying he didn't want to dilute the idea of black Catholic men being visible in leadership.

Mary Grace Hamilton Lucas was one of those first women ministers. She remembers the time well. They met in an old convent twice a week for nine months. The women knew this was a special calling: they wanted to differentiate themselves from the men, so they decided to wear a rainbow medallion with their albs. On Pentecost Sunday, June 3, 1979, they were installed by Auxiliary Bishop Thomas Gumbleton.

"When we walked up that center aisle," she said, "we were scared, we were nervous, our hands and our knees shook."

This was the 1970s and the spirit of Vatican II was still in development. The idea of women on the altar, whether as lector or Eucharistic Minister or Minister of Faith, was new to many Catholics. During the installation, some members of the congregation walked out. They wrote letters to the pope. They wrote to local papers, complaining. But 39 years later, the Ministers of Service are still here, still answering the call to help in many ways. 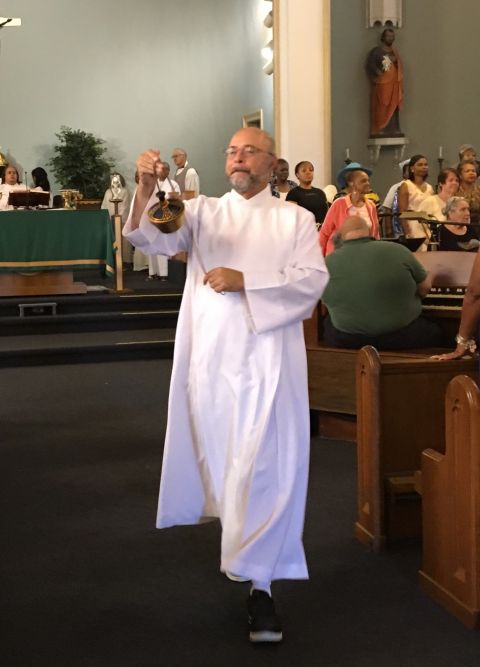 Chalonie and Roy Hoelscher are a married couple who are also experienced Ministers of Service. Chalonie was in that inaugural group of women. She remembers that installation Sunday as an uplifting and sacred experience.

"With the group we had, it was exciting for me. It was a big part of my life to become a Minister of Faith," she said.

After undergoing training and being inducted, Chalonie Hoelscher became involved in prison ministry and visiting the sick and homebound. Both she and Roy continue to be ministers today.

At Christ the King Parish, Paulette Washburn hesitated before finally deciding to take part in the training. "I realized," she said, "that this was a commitment. I was told I would learn more about what I could do to help my church and community. My ministry wasn't to be on the altar, but to help in other ways."

To her, this was a renewal of her faith, a chance to learn more about today's church. During training sessions, participants sat with people they didn't know. Washburn loved it. "People from different parishes mixed together," she said. "Some people had a newer vision of the church. I didn't have that. I had a lot of baggage. Being a Minister of Service has given me a new perspective on service to others and the church in general."

For some 25 years, each parish trained their own ministers. That meant some 30 different parishes used their own resources to train their respective members.

According to St. Joseph Sister Mary Catherine DeSantis, the former director of the Detroit Catholic Pastoral Alliance, that created some obstacles for parishes.

"We wanted the training to be uniform. It was becoming segmented and many parishes just didn't have the resources," said DeSantis.

In 2006, the Detroit Catholic Pastoral Alliance took over the training for all parishes, thus allowing for consistent instruction across the archdiocese. The curriculum is intense. Sessions on canon law, evangelization, spirituality, sacraments, the Bible and liturgy are offered by a rotating group of scholars.

Classes are held on Saturdays in August, September and October each year, with successful candidates installed as Ministers of Service by a bishop in November.

Today, the role of Ministers of Service varies from parish to parish. Lay ministers assist in the celebration of the liturgy. They read Scripture, conduct general prayer introductions and serve communion.

Outside of the sanctuary, Ministers of Service visit the sick, assist the bereaved, direct prayer services at cemeteries, teach Bible study and take part in youth ministry. Fr. Theodore Parker, Pastor of St. Charles Lwanga on Detroit's west side, was blessed with help from Ministers of Service at three parishes: St. Leo, St. Cecilia and St. Luke.

"Al McNeely knew that it was important for African Americans to have a presence in the church," said Fr. Parker, noting that for him the lay ministers are involved in both the spiritual and practical life of the parish. "It's a great thing for lay people who want to be more involved."

Thomas noted that the Ministers of Service have brought their ministry beyond the church sanctuary. "They are Ministers 24/7," he said. "They don't stop when Mass is over."

[Gary Torgerson is a retired teacher and administrator in Detroit Public Schools. He has also taught writing at the Wayne State University School of Labor and St. Mary's College in Orchard Lake, Michigan. His freelance articles have appeared in the Detroit Free Press.]

US parishes work to get Catholics back to in-person Mass