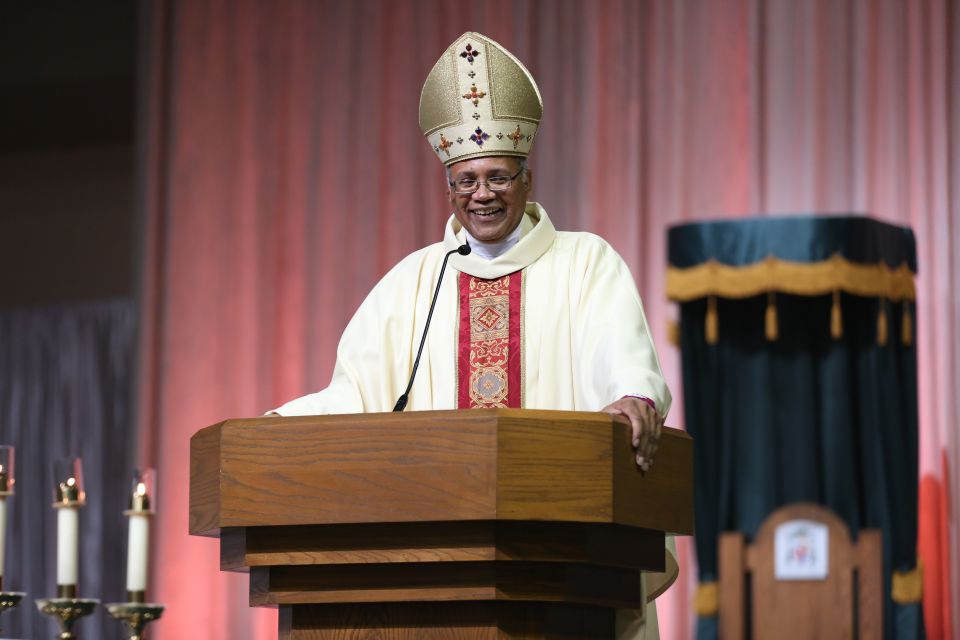 Bishop Martin D. Holley delivers the homily during his Mass of installation as the fifth bishop of the Diocese of Memphis, Tennessee, on Oct. 19, 2016. (CNS photo/Jaclyn Lippelmann, Catholic Standard)

The Diocese of Memphis was the subject of a three-day visitation in June by a two-member archbishop team who will report to Pope Francis on the state of the church in western Tennessee.

The visit by Archbishop Wilton Gregory of Atlanta and Archbishop Bernard Hebda of St. Paul-Minneapolis was apparently intended to respond to complaints about the leadership of Memphis Bishop Martin Holley, who was made Memphis bishop in October 2016 after serving as auxiliary of Washington, D.C. Gregory and Hebda met with up to 50 priests and laity of the Memphis Diocese during their visit.

"On a scale of one to 10, this is an 11," Fr. James Danner, a Memphis diocesan priest and retired naval chaplain living in Hawaii, told NCR about the impact of the investigation. Danner is among those with Memphis church ties who wrote to Archbishop Christophe Pierre, the apostolic nuncio based in Washington, questioning Holley's leadership.

Within a week of the visitation, vicar general Fr. Clement Machado, a Canadian priest brought in by Holley, resigned from his position. Holley issued a statement that Machado needed to pursue further studies and tend to his recently widowed mother. He did not mention any impact from the visitation.

Holley generated controversy soon after arriving in Memphis when he ordered the transfer of about 75 percent of the diocese's pastors, an unprecedented move. The Diocese of Memphis has about 65,000 Catholics and 42 parishes.

Danner told NCR that he returned for a convocation of priests in the diocese last year and was told he should consider himself lucky to be living far from the diocese. He said that morale among priests was low, and that parish collections and contributions to the annual diocesan appeal had declined significantly.

Danner, who is retired from the military and ministers in parishes in the Diocese of Honolulu, has been the only priest of the diocese to publicly comment on Holley's leadership. He said that he was able to do so because he is retired and receiving a government pension, making him immune from any retribution from the diocese.

Soon after his arrival, Holley asked pastors to sign a resignation letter. Nearly all complied, but Danner said they did so thinking it would be a formality to assist the new bishop make some changes. Fr. David Graham, pastor of St. Mary's Church in Jackson and just a few years from retirement, refused and filed a canonical case against the bishop.

Among other moves since Holley's arrival, the diocese, citing financial issues, said it will close 11 Catholic jubilee schools in Memphis in 2019. The schools were an initiative begun by Holley's predecessor, Bishop Terry Steib, to provide Catholic education in poor areas of the city. They are expected to apply to become public charter schools.

In his letter to the nuncio, Danner wrote that Holley had lost support of his priests and that "you will have to listen to the checkbook of the laity." According to a story in The Commercial Appeal, donations to parishes, Mass attendance and the diocesan annual appeal are down. Some parishioners have followed their pastors to new parishes as a result of the transfers.

Holley, in a June 22 letter to diocesan priests, said that the purpose of the visitation "is to assist the local diocese and improve the Church's ability to minister to the people it serves." He asked the priests to respect the confidential nature of the visitation process.