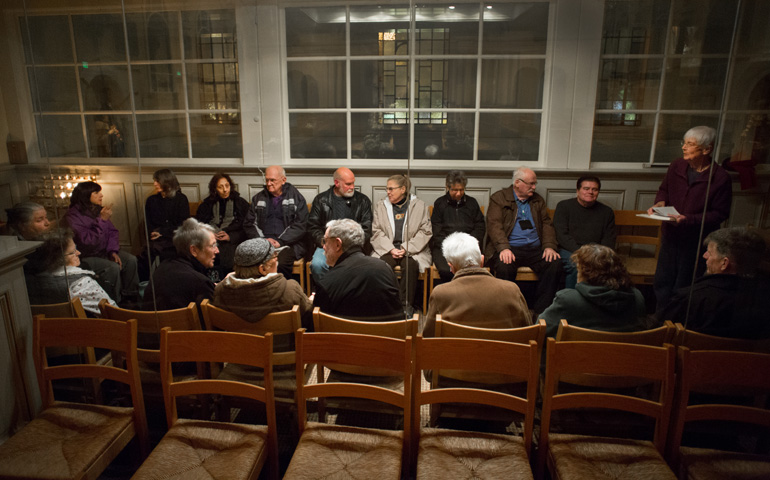 This is the final part of a five-part series about San Francisco's Most Holy Redeemer Church. Each day this week, we published one part of this story. Find all parts here.

Each Monday evening, while the nightlife blossoms down the street on Castro, a unique Most Holy Redeemer Church witness unfolds. Some one to two dozen men and women gather in silent meditation within the church for centering prayer, one of the parish's ministries for several decades.

After a Scripture reading, the gathered sit in silent meditation for up to an hour before sharing their thoughts. "No judgments," Charity Sr. Cathy Cahur reminds the group sitting in a circle in the back of the church. Cahur first formed the group in the mid-1980s as a personal response to the HIV/AIDS explosion.

Her order had originally assigned her to come to California in 1985 to study counseling. She got involved working with substance abuse addicts in the Tenderloin, a poor neighborhood in San Francisco known for its rampant drug use and prostitution. Cahur is retired now, but centering prayer remains her vocation.

Today, she lives alone in a cubbyhole of a room in the rear of a house on Castro Street. It costs her order $748 monthly, a bargain in the Castro. Almost 60 years a woman religious, she has witnessed and weathered a lot, half that time walking the streets of the Castro. Nothing fazes her, nothing. She says she stays current on local matters by reading the gay and lesbian tabloids.

Decades ago, as a young sister living in Colorado, she and others in her congregation would visit Trappist Fr. Thomas Keating in Snowmass, Colo., where she discovered centering prayer.

She knew right away it fit her spiritually, she said. "In centering prayer, you sit in God's love and let go." Quoting Keating, she calls the practice "consciousness without content."

Originally, her prayer group, only a handful at the time, would meet in each other's homes, but eventually they moved into the church where they continue the practice -- they call it vigil or witness -- each Monday evening. A small sign attached near the entrance to the church invites anyone to join.

Most of the ministries of the parish predate its current priests, who seem eager to keep things moving forward.

"It's been a miracle for [Precious Blood] Fr. Matt [Link] and me to be here. We're grateful to our community and the archbishop for making this possible," said Precious Blood Fr. Jack McClure, Most Holy Redeemer's pastor.

In September 2014, local civic leaders unveiled 20 bronze plaques set into sidewalks on Castro in the heart of the district, each honoring a LGBT person, including such notables as writers Oscar Wilde and Allen Ginsberg, and Christine Jorgensen, the first person widely known to undergo sex reassignment surgery. They also unveiled 20 cement factoid plaques mixed in with the honorees. Affirming Most Holy Redeemer's historic place in the community, one of them reads that the Castro was once referred to by the name Most Holy Redeemer.

One recent morning after Mass, McClure and a handful of parishioners gathered to bless "the parish's plaque." That Most Holy Redeemer and Jorgensen are recognized along the same street attests to the parish's faithful witness as well as to the remarkable compassion the parish has shown toward LGBT people.

In dozens of interviews over several weeks with MHR parishioners, I found both pain and an eagerness to celebrate. I found a desire to be better understood by the wider church community. I found a willingness to forgive. I found much openness and universal abhorrence of judgment.

I found hope, sometimes fledgling, that Francis, given enough time, can change the course of the church, especially in how the institution affects the lives of LGBT Catholics. I found an extraordinary eagerness to come together as people of faith to help each other in ways big and small. I found, in words often suggested by Most Holy Redeemer parishioners, community in the Castro.