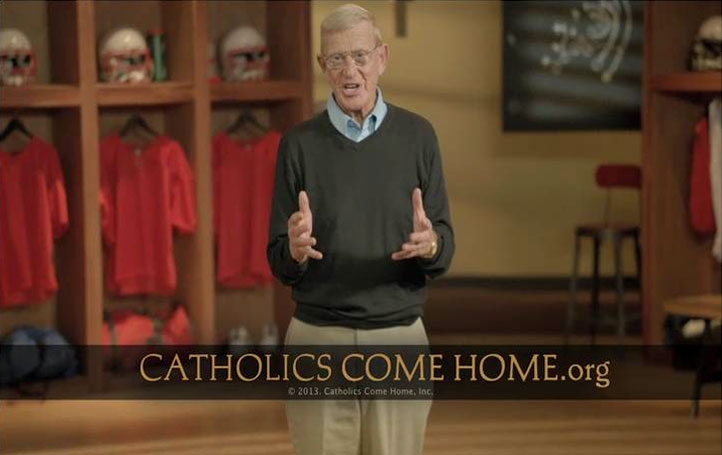 Sports fans who gather around TVs to watch this year's college football championship game will see Notre Dame head football coach Brian Kelly calling defensive formations and audibles to his players. But during commercial breaks, they'll see a former Fighting Irish coach making a call of his own -- for Catholics to "get back in the game" of going to Mass.

"For victory in life, we've got to keep focused on the goal, and the goal is Heaven. The key to winning is choosing to do God's will, and love others with all you've got," says Lou Holtz, coach of Notre Dame's 1988 undefeated championship team and the star of Catholics Come Home's latest national commercial campaign.

"If you or your family haven't been going to Mass every week, get back in the game. We're saving your seat on the starting bench this Sunday," says Holtz, himself a Catholic.

The commercials began airing Dec. 27 and run through Jan. 8. The timeframe runs parallel to college football's bowl game season, which reaches its apex Jan. 7 with the 2013 BCS championship game in Miami between Notre Dame and the University of Alabama.

The 30-second Holtz "evangomercial" is set to air in various markets and programming, and estimates to reach 70 million households. Cable sports network ESPN, where Holtz works as an analyst, will broadcast this year's BCS championship.

"All those viewers who follow the wisdom of Coach Holtz -- keeping focused on the goal in life: Heaven. They will be the true winners when their final down is played," Catholics Come Home president and founder Tom Peterson said in a news release.

Catholics Come Home is a lay-led media apostolate that seeks to use television ads as an evangelism tool, and has multiple bishops on its advisory board. It formed in 2008 and has run campaigns in unison with 35 dioceses across the U.S., including Boston, Cincinnati, Chicago and Phoenix. In December, it crossed outside U.S. television markets for the first time, heading north to Canada for a campaign in Vancouver, British Columbia.

The football-themed ad comes a year after Catholics Come Home's first national campaign, which aired commercials in 10,000-plus cities during the 2011 Advent and Christmas seasons. Citing Nielsen data, it said that campaign, dubbed "the largest family reunion in history," reached more than 125 million viewers an average of 10 times each.

In January 2012, NCR first examined Catholics Come Home during the national campaign, finding varying degrees of success for the commercials in actually bringing Catholics back to church and retaining them once there. In responding to that story, Peterson reiterated that the benefits of his organization's ads extend beyond numbers and can act as a catalyst to increased evangelization efforts in the diocese.

"[Catholics Come Home] cannot be responsible for keeping people in the pews over the long-term, as that is the mission of the parishes," he wrote in an email.

With Holtz a familiar face to fans, Peterson hopes the coach's pep talk will help those who see it rediscover a passion for their faith on par with their passion for football. Ultimately, that requires not just passive watching, but an active commitment to God, beginning with weekly attendance at Mass.

"Faith is not a spectator's sport; it must be lived," Peterson said.