Francis' participation with families an example for other priests 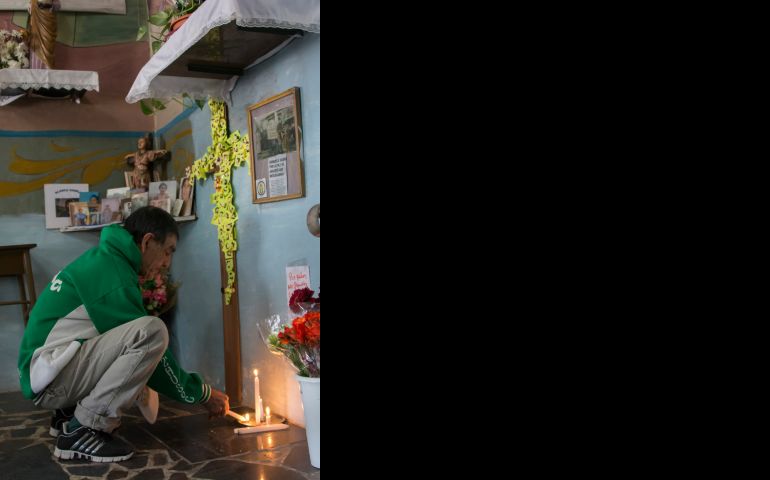 At the Virgin de Caacupé Parish, a local man from Villa 21 lights a candle at a makeshift altar dedicated to youths who have died from violence. (Horacio "Tati" di Renzi)
This article appears in the Francis in the United States feature series. View the full series.

"Many of the people who work here — take maids, for example — usually can't admit where they live," Congo said. "They'll get rejected. Why? Because 'everyone from las villas is the same.' "

"That's happened to me," Cabral added.

The majority of people, they said, are Monday-through-Friday workers who spend free time at their parishes, or are college students and seminarians trying to make it out of the neighborhood.

Part One: Buenos Aires slums have shaped a papacy

Part Three: Change in Argentinean church comes from bottom up

"It's not like what most people think — that the slums are all delinquents and narcotics," Congo said. "That's here, sure, but you can find that in any neighborhood. People forget about the hard workers. Unfortunately, when crime occurs in our villa, people write it off as, 'Oh it's the people from the slums,' even if it was just one person."

Though these stereotypes challenge job prospects, Cabral said that, more damagingly, these misconceptions are a blow to their pride.

"It's rough when the kids are ashamed to say where they're from, because if they say la villa, they feel like the other kids look at them differently," Cabral said. "I've had to deny where I'm from as I looked for work, and it's painful because you should be proud of where you're from."

But having a bishop who's always around and levels himself with those who feel discarded by society served as a constant reminder that there's dignity in leading a modest lifestyle.

"Day by day, we learn to hold our heads high; I used to hang my head low," she said. "And it's not just because he's the pope, so much, because even before that, we learned to look at life this way, but thanks to him."

Upon his election, Francis' humility was an immediate and pleasant surprise to the world that didn't know anything about its first Latino pope. But to those in Villa 21, his words and actions were more of the same old Bergoglio.

Hopping off the bus, Bergoglio would often show up and casually celebrate Mass unannounced, rather than have the usual spectacle that follows bishops into local parishes. His homilies would emphasize that though there are a lot of rich people in the world, it's mere material wealth. Here, he would tell the congregation, are the people who are rich within.

"We asked him why he would share the table with us, or why he didn't act like other bishops, and he always said that what interested him was our spiritual wealth," Cabral said. "We never saw him as a señor — he was a friend here."

Congo, Cabral and Padre Pepe said that Bergoglio was basically just another priest in the slums because he was so present, never missing a big feast or daylong confirmations. Everyone felt like they could approach him with their problems without him ever seeming too busy, and they could stop him on the street and ask for a quick blessing.

Bergoglio being so approachable, Cabral said, made the other priests more approachable, as they would see him walk alongside the parishioners and then do it more themselves.

She said it was typical of Bergoglio to randomly knock on their doors and ask to join for coffee or mate — an Argentine tea. "We would always talk about whatever we felt like talking about, because he allowed that kind of conversation," she said. And those who knew him well might not even realize he had been at a Mass the whole time, sitting in the back corner with his briefcase on his lap, observing everything.

"The difference between him and other bishops was that he was involved in las villas — not just one who sent priests, but one that would go himself," Padre Pepe said. "He would substitute for priests. You got sick, you'd call him, and he'd celebrate the Mass, anytime you needed him."

Just as dutifully as he would show up for special Masses, Bergoglio would attend retreats or group gatherings and give 40-minute lectures, no matter how many attended.

When asked how Francis could serve as an example to other priests and bishops, Cabral and Congo were emphatic in their response: by his participation. Families going through incredibly rough times, they said, would go on long walks with Bergoglio just to talk, weaving through the grungy narrow alleyways — never mind the rain or mud.

"When I picture him, it's not as the pope," she said. "It's in his black suit and briefcase in hand — which he took everywhere with him — on the bus coming here or on the subway heading to the cathedral."

A popular photo of Bergoglio for those who live in Villa 21 is of him in his black garments, eating a choripán — a traditional chorizo sandwich.

"Everyone has a picture of him from that day," Congo said. "Because even though he was the archbishop, it was clear that he didn't need a special meal — he could just share choripanes with us. Anything we ate, he ate. His humility and simplicity was very clear to the people."

As pope, Francis' outreach to other religions and nonjudgmental phrases garnered further international attention while raising delighted eyebrows across pews — except for those in Villa 21. Their former archbishop had great relationships with Muslims and Jewish alike, Congo said, a trait that was highlighted when he participated in a large get-together attended by a number of religions.

A photo of Bergoglio hugging a non-Catholic Christian gained the community's attention, particularly the story behind it: Bergoglio said to the crowd, grab the person next to you, and ask them to pray for you. He turned to the non-Catholic and said, "Pray for me."

"He still says that — 'Pray for me,' " Congo said. "He could've tried to convert that person in some way, or seek to baptize him. But no — he asked that he pray for him."

The former archbishop once known for never smiling is, to those from the villa, the same man he's always been. Visibility requires change, Congo said in reference to the now cheerful pope, but those who know him well have not been surprised by his papacy yet.

He was a very good friend to all the priests, Cabral added, "and we're lucky for that."

"I've known him for a very long time and began my work in las villas when he was archbishop, our relationship getting even stronger throughout my time at Villa 21," Padre Pepe said. "He very much liked the work we did for kids and adolescents regarding [drug] prevention and recovery, or our missions and spiritual groups. More than anything, he loved our missionary work — a love we very much shared.

[Soli Salgado is an NCR Bertelsen editorial intern. Her email address is ssalgado@ncronline.org. Follow her on Twitter @soli_salgado.]

Editor's Note: This is Part Two of a three-part series on the Buenos Aires, Argentina, slums and the families who live there.

Parish | Francis' participation with families an example for other priests

Change in Argentinean church comes from bottom up