The 'had it' Catholics 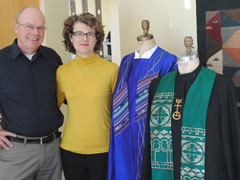 Patty Fitzpatrick spent years wrestling with Catholicism, mustering the will to show up at church with her husband and two children, pushing back against teachings she didn’t agree with and attitudes about women that made Sunday Mass a weekly occasion for anger. Pope John Paul II’s pronouncement that women would never be ordained and that Catholics were forbidden to even think or speak about such an eventuality sent her over the edge.

She started meeting with a small group of other angry and distressed Catholic women in the Kansas City, Mo., area. Ultimately, she tired of complaining about the church, stopped going, and began attending St. Andrew Christian Church in nearby Olathe, Kan., a Disciples of Christ congregation. She’s never looked back.

Fitzpatrick was later joined by her husband, Jim, a lifelong and devout Catholic who said his loyalty was finally worn down when a new bishop in the Kansas City-St. Joseph diocese began dictating changes in liturgy, requiring such things as chalices made of precious metals, moving laity farther from the altar and prohibiting priests from leaving the altar during the kiss of peace. Yet he describes his move from St. Francis Xavier Parish in Kansas City as gradual and occurring over time, with no one thing triggering his exit.

The Fitzpatricks fit the profile of the “had it” Catholics who are leaving the church and either dropping out of organized religion altogether or finding refuge in other denominations.

In working on the Emerging Church series, it was easy to develop the impression that the church is hemorrhaging people and to form the question about what it means to the future of the church. Every diocese, it seems, has its “parish of last resort,” and every city of any size seems to have its Disciples of Christ, Episcopal, Lutheran, Presbyterian or Unitarian Universalist congregation that benefits from the Catholic fallout.

A study released in 2008 by the Pew Forum on Religion & Public Life appears to support that common wisdom. It reported that while Americans in general “change religious affiliation early and often,” Catholicism has especially suffered from the trend, experiencing “the greatest net loss” of any major religious group.

The picture, it turns out, is more complex than the bare figures might indicate. But the figures, however they are viewed, are alarming: Those who have left Catholicism outnumber those who have joined the church by an almost four-to-one margin. Slightly more than 10 percent of American adults (10.1 percent) have left the Catholic church after having been raised Catholic. At the same time, only 2.6 percent of adults have joined the Catholic church after having been raised in another denomination or faith.

The adult population of the United States was 228.1 million in 2008. So if one in 10 U.S. adults were former Catholics, that 22.8 million would make ex-Catholics, if one considered them a denomination, the second-largest in the country behind Catholics, who list 68.1 million members, according to the National Council of Churches’ 2010 Yearbook of American and Canadian Churches. The ex-Catholics would far outnumber the next largest denomination, Southern Baptists, who claim 16.2 million adherents.

Forty-eight percent of Catholics who are now unaffiliated, according to Pew, left the church before reaching age 18. The same goes for a third of those now Protestant.

“Among both groups, an additional three in 10 left the Catholic church as young adults between ages 18 and 23.” Only a fifth of those who are now unaffiliated and one-third who are now Protestant left after turning 24.

In other words, a great deal of the drain from Catholicism is occurring among those who are much younger than Vatican II-era Catholics and their long-standing debates over the direction of the church.

A large majority (71 percent) of former Catholics who are now unaffiliated say the move from Catholicism occurred as a gradual drifting away from the church. The same goes for 54 percent of those who left for a Protestant denomination.

What all of this means to the future of Catholicism is difficult to determine. According to a spokesperson for the U.S. Conference of Catholic Bishops, no one at the conference is studying the phenomenon. Perhaps this massive exodus is not ringing more alarm bells because Catholics are in the same predicament as almost all other mainline Christian denominations. One of the central findings of the Pew study is that we are an incredibly mobile population of believers. About half of American adults have changed religious affiliation at least once during their lives, according to that report.

In the Catholic world, even though tens of millions have exited the church, the bottom line hasn’t changed much. The 2010 figures published by the National Council of Churches show the total Catholic population at 68.1 million, up 1.49 percent over 2009.

Much of that increase, of course, is due to immigration.

In her assessment of the most current figures, the Rev. Eileen W. Lindner, editor of the annual National Council of Churches yearbook, said that the “largest plurality of immigrants to the U.S. in the last 50 years have been Christian in their religious affiliation” and that the influx of “robust Christian communities among new immigrants” has profoundly affected the Christian faith community in the United States.

Mark Gray, a research associate at the Center for Applied Research in the Apostolate at Georgetown University in Washington, paints a kind of too-big-to-fail scenario.

The Catholic number draws so much attention, he said, because it is huge. As a bit of sociological data, said Gray, the finding was not surprising. Researchers have known about this exodus for some time. Some of it may be explained by the decline in participation in civic and other traditional organizations that the general culture has experienced since the 1960s, Gray said.

What really concerns Gray, however, is the “sacramental data,” the numbers that show a falling rate in baptisms, some of which is related to a falling rate of fertility, but some of which is also linked to the exodus of Catholics. The drop in the number receiving later sacraments -- first Communion, first confession and marriage -- is even more problematic, he said, because those numbers indicate that parents aren’t following up with sacraments later in childhood. “Marriage is one of the [sacraments] most strongly affected. The number of marriages is so much lower than the number of the Catholics in church” would indicate. “It’s not that Catholics aren’t being married,” said Gray, “it’s that they are choosing to marry outside the church.”

He noted that key generational differences also show a pattern.

In the Vatican II generation, born between 1943 and 1960, 91 percent were confirmed after receiving first Communion and first confession. Confirmation is seen as an important marker for showing decline in reception of sacraments.

In the post-Vatican II generation, born 1961-81, or Generation X, the number confirmed had dropped to 79 percent.

Among the Millennial generation, born 1982 or later, only 69 percent had been confirmed.

Although the Catholic bottom line may be stable thanks to immigration, there is clearly a “lack of shepherding young Catholics into the faith,” said Gray.

Lower in the rankings of reasons for leaving (percentages ranged from low teens to mid-20s) were the clergy sex abuse scandal; clerical celibacy; married someone from a different faith; dissatisfaction with clergy; and unhappy with teachings on poverty, war and the death penalty.

So, while the “churn” in the Catholic world may be no different percentage-wise from that of other denominations, the fact that the Catholic universe is so large means that the percentages represent millions for whom dissatisfaction with church teachings and practice were among the reasons for leaving.

The Rev. Gail Greenwell is rector of St. Michael and All Angels Episcopal Church, also in eastern Kansas and a large congregation (1,100 families) by Protestant standards. She estimates that 50 to 70 percent of 85 to 100 new members each year either come from the Catholic church or have a spouse who is Catholic. She includes herself in the latter category -- her husband is a former Catholic.

She said groups of new adult members attend classes and one of the first questions asked is what denomination they previously attended. “The largest group is always Catholic.”

She said that the percentage of Catholics has remained fairly constant over her 10 years as an ordained minister, most of which was spent in the San Francisco area. She’s been in Kansas for the past three years.

Anecdotally, she said, she sees two trends. Among younger women, who often seem to be attracted to the idea of female leadership, some are distressed over the way in which the church has handled the sex abuse crisis. “Young people seem more interested in transparency.”

At the same time she is seeing older women, often single women of around 50, who say they miss “my old Catholic church” and are attracted to the congregation’s weekly traditional high Mass, with full choir, incense, traditional hymnody, full procession, full vestments -- and a woman presiding.

Some convert from Catholicism, she said, after attending weddings or funerals and encountering the Episcopal church’s more open approach to Eucharist -- everyone is welcome to receive -- and the lack of restrictions on those who may be divorced and remarried, often a point of contention in the Catholic church.

That same kind of openness and inclusive welcome, as well as a highly collegial approach to determining the direction of the church, were among the attractions that drew the Fitzpatricks to St. Andrew, which they describe as a small (with 400 families) congregation that is fairly homogeneous in its liberal outlook. Another attraction was the presence of a former priest friend, Tom Minges, who had presided at their wedding in 1985, the same year he left the priesthood. Minges is married and has been an associate pastor at St. Andrew for about the past four years.

After leaving the Catholic church, Patty Fitzpatrick began seriously developing a business that had been suggested to her by a Catholic liturgist friend: making vestments for women.

It was a good fit for someone with a degree in fashion merchandising from the University of Missouri in Columbia and years of experience in the retail business. WomenSpirit, Vestments for Women, now employs 10 people, owns a building in North Kansas City, and produces 2,500-3,000 robes and albs a year as well as clergy shirts and other garments. One of her earliest customers, a female Episcopal priest, was in search of something more fitted. “When I have my alb on with cincture,” she told Patty, “I look like a sack of flour with a rope tied around.”

The business has recently opened a men’s line, called Abiding Spirit, for mostly Protestant ministers who would like an alternative to buying from Catholic bookstores and suppliers.

The couple speaks enthusiastically of St. Andrew’s social justice emphasis and its many ministries. Even though it’s a suburban church, it has a strong presence in urban areas serving dinner, distributing clothing and other services. It also has a migrant workers’ outreach project. “It’s just like a Catholic church,” said Patty, “but it’s not.”

Read all of Tom Robert’s articles in the Emerging Church series at NCRon line.org. The direct link is NCRonline.org/blogs/in-search-of-the-emerging-church.

Parish | The 'had it' Catholics