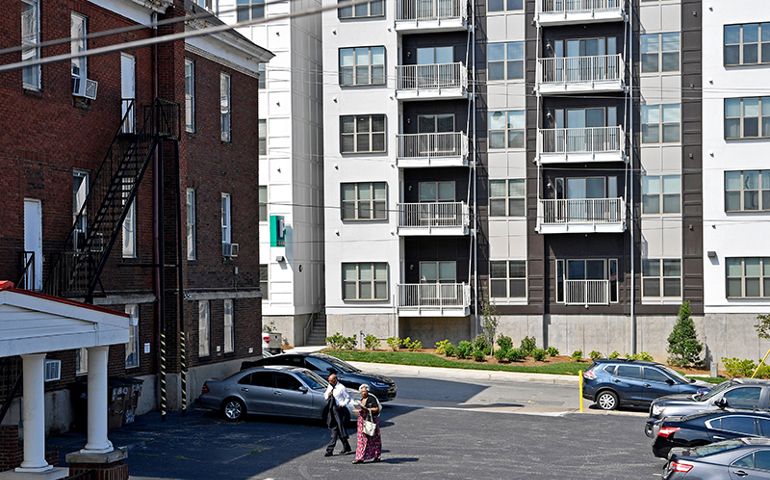 Worshippers arrive on July 16, 2017 for Sunday service at First Baptist East Nashville in Nashville, Tenn., with a backdrop of a new luxury apartment building next door. (Larry McCormack / The Tennessean)

Nashville, Tenn. — A nearly 90-year-old church now stands across the street from a new luxury apartment complex, illustrating how redevelopment has altered its neighborhood.

It also shows that places of worship, like First Baptist Church East Nashville, are not immune to the changes in their communities.

Given the neighborhood’s shift, is Tipton worried about the church’s future?

“If I think about it outside of the confines of God, I am,” Tipton said. “Most of the black churches in this community are leaving. They are selling their churches to land developers who are turning them into restaurants and bars and condos and apartments and any number of things.”

Similar stories are playing out across the U.S. Buildings that once held worship services have been repurposed or bulldozed and redeveloped into bars, restaurants and other secular spaces:

Churches need to decide how they’re going to react to their changing neighborhoods, said Alvin Sanders, the interim president and chief executive of World Impact.

“It makes a church re-examine its call. Every single church is called to make disciples,” Sanders said. “It has to decide: Is it there to reach its community even if its community changes? That’s really the biggest pressure.”

For about 40 years, World Impact, a Los Angeles-based urban missions organization, has trained pastors working in impoverished communities across the country.

Many of those neighborhoods are becoming home to new residents, who want shorter commutes and the vibrancy of an urban area, Sanders said. The attitudes, beliefs and values of residents change dramatically as the median income moves up.

“To simplify this, I jokingly say that you know a neighborhood gentrifies when it goes from baggy jeans to skinny jeans as a fashion statement and with that all of the culture that comes with those fashion statements,” he said.

Gentrification tends to send churches down one of four paths, Sanders said.

One route is relocation. The church follows the neighborhood’s displaced residents.

Or a church stays but tries to change the makeup of its congregation by reaching a multiethnic group across social classes.

Tipton strongly believes that a church should be part of its community. He said First Baptist Church East Nashville’s congregation is healthy, and about 75 people fill the pews every Sunday.

But he also is trying to reach the people who live next door, both those in the luxury apartments as well as families in a Section 8 housing complex behind the church.

“I’m a firm believer that heaven is not racially segregated, and so because of that I think it’s not a good thing for churches to be,” Tipton said. “I just feel led to try to bring back that whole community spirit.”

That outreach manifests as community forums, back-to-school drives and a biweekly door-knocking campaign inviting all neighbors to attend a service. So far, only about five white people have accepted that invitation, the pastor said.

“They come, and they generally don’t come back because again more times than not this is not the flavor of worship they’ve grown up with,” Tipton said.

Another response is for a new church to start. Suburban churches open a campus or plant a church in the urban core to reach the new residents, Sanders said.

Finally, a church can die.

In Sanders’ experience, gentrification isn’t typically the direct cause of a church’s demise. But the deep pockets of developers can tip a congregation toward closure.

“It’s that they were struggling anyway and gentrification sort of hastened the whole process,” Sanders said.

Gentrification is far from the only factor affecting the life cycle of a house of worship. 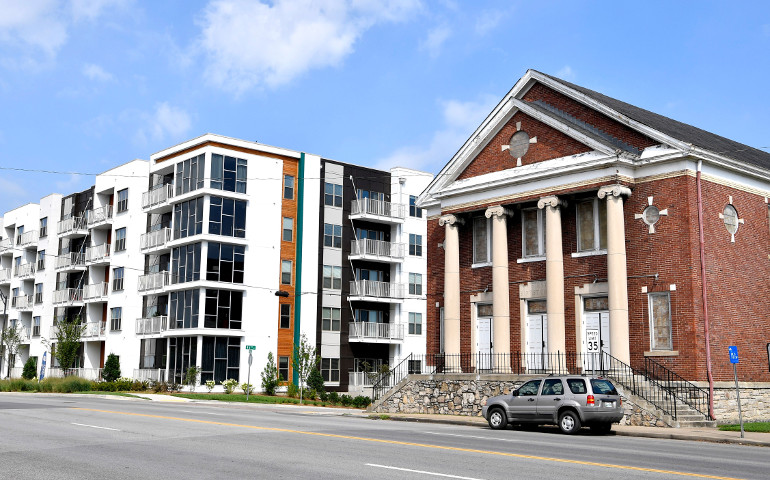 First Baptist East Nashville, pictured here July 16, 2017, is in a time of transition because the neighborhood has changed around it and the congregation is trying to reach out to the neighborhood. Next door is a large apartment building and behind the church is Section 8 housing. Larry McCormack / The Tennessean

Internal issues such as pastoral turnover, church politics, aging buildings and limited finances can harm a congregation. Cultural trends, including the drop in membership at mainline Protestant denominations and the increase in people who do not identify with any religious group, can affect a church’s longevity, too.

The luxury condo in the nation's capital now called The Sanctuary previously was home to the Way of the Cross Church of Christ, an African-American congregation that sold the building in 2014 and built a new one in the Maryland suburbs.

Across the city, it is one of dozens of church buildings that have been converted to commercial uses.

The District of Columbia, which was a majority-black city for decades, has seen more than 100,000 new residents arrive in the past 20 years. Now blacks make up just under half the population.

In Springfield, the former Calvary Temple building was razed in 2015, and a Walmart Neighborhood Market went up in its place. Members of the congregation migrated to other Assemblies of God churches in the southwest Missouri city of 167,000 people.

Through the decades, the size of Calvary Temple’s congregation had waxed and waned. Pastoral turnover and aging facilities as well as the hollowing out of the city’s downtown because of new development elsewhere affected its fate.

The sale of the building didn’t surprise the Rev. Phil Hastie, who served as Calvary Temple's pastor from 1980 to 1989, long before change swept the church away.

“People more times than not will not come to a drive-in type of church,” Hastie said. “They tend to find a congregation close to where they live, where their kids go to school with other kids.”

In downtown York, a long-vacant former church building in the city of 44,000 about 80 miles west of Philadelphia could experience a revival.

Its dwindling congregation decamped in 1995 for the suburbs, which were poised for growth. The move likely saved the congregation itself, which numbers around 1,300 today.

“To think that a small group of committed people had pulled this off,” said the Rev. Stanley W. Combs, Zion Lutheran’s pastor from 1994 to 2014. “It was a prudent move.”

The York County Industrial Development Authority bought the building last year. As the neighborhood becomes more upscale, the authority is considering turning it into an event space for the historic Yorktowne Hotel next door. 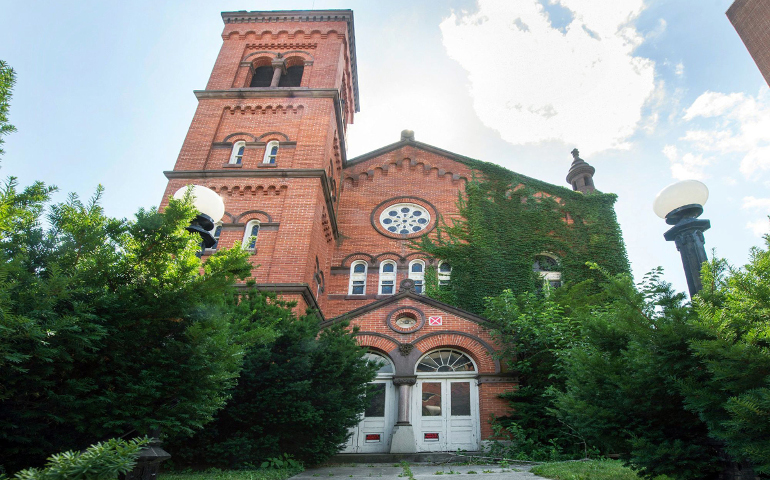 The congregation of Zion Lutheran Church in York, Pa., moved from its downtown building in 1995. The York County Industrial Development Authority bought it in 2016 and may turn it into an event space for Yorktowne Hotel next door. Photo by Paul Kuehnel / York (Pa.) Daily Record

At Norwood, children’s rooms were so empty “it looked like the rapture had happened,” said Kemp Wynn, who previously led the church and became associate pastor after the merger.

The once predominantly white neighborhood surrounding Norwood Baptist is now home to a number of Hispanic residents and refugees. In April, First Baptist Church of Powell moved its Hispanic congregation to Norwood Baptist's building.

“When someone walks in now and it’s a person of color … they are going to look around and say, ‘Hey I’m not the only person of color in this room,’” said Tim McGhee, the elder for missions and evangelism at First Baptist.

If Norwood Baptist keeps growing at its current pace, church leaders think it may become a standalone church again in a couple of years.

In rapidly growing Nashville, some churches are trying out mergers, too. But developers also are snapping up old church properties in the midst of the city’s booming real estate market — including a United Methodist church that soon will become an event space.

The new owner had to decide what to do with a 112-year-old pipe organ.

But for some places of worship, money from developers won’t matter. They’re staying put.

For years, the Islamic Center of Nashville has fended off offers to buy its property in the heart of the city’s now-trendy 12South neighborhood, said Rashed Fakhruddin, president of the Islamic center. The mosque moved in a couple of decades before redevelopment transformed the crime-prone neighborhood and property values shot up, which have made it hard for its members to live nearby.

“People started coming to us asking if we would sell and offering a boatload of money. Until this day it still happens now and then, but I think most people know we’re not moving anywhere,” Fakhruddin said. “They could offer us the world, but we love our roots here.”

Tipton at First Baptist Church East Nashville has received those calls, too. But he tells solicitors he’s not interested in meeting with them, nor does he want to know how much they’re willing to pay.

His church has survived tornadoes and floods as well as neighborhood crime and redevelopment. It’s not leaving, Tipton said.

“I don’t think God did all of that for us then to say, 'Well, let’s just go on and take the highest bid, and we’ll go find something else,'” he said. “I just don’t think that’s what God has for us.”

Finding community in the Castro

Surveys show who may be leaving the Catholic church