Journalist explains why he's on the road 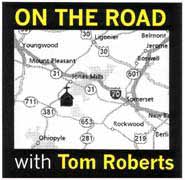 The idea of taking an extended road trip to get a closer look at Catholic America began to take shape little more than a year ago when I attended a national meeting that demonstrated rather clearly that something is bubbling up from the grassroots in U.S. Catholicism.

The meeting was a kind of culminating gathering, to that point, of a four-year study, funded by the Lilly Endowment and titled, "Emerging Models of Pastoral Leadership."

After four years, to put it quickly, the study had established through extensive interviews with church workers and leaders throughout the country, as well as exhaustive research and discussion, that:

The project has generated papers, speeches, articles and at least three small books, and amid it all the notion of "emergence" plays large. While the project is principally about emerging models of pastoral leadership, part of the process involves looking at an emerging theology of parish and the emerging ministry of parish life coordinators. There is an almost springtime feel to all the talk of newness, emergent shoots of new life, if you will, breaking through the troublesome loss of parishes, the deepening crisis of the priest shortage and continuing drop in the number of women religious, as well as demographic shifts and challenges that create episcopal nightmares.

The enthusiasm, to be certain, is uneven. Whether the new models take hold and develop depends on individual bishops.

Forces upon forces are causing both upheaval and opportunity in the church. During last year's gathering, Bishop Blase Cupich of Rapid City, S.D., advisor to the project funded by the Lilly Endowment, gave a talk, and high up in the text was the bold-faced heading: "Something new is happening in the life of the Church: How to understand it?"

How, indeed. It was intriguing to read in the materials of the Emerging Models project of how dramatically different from the church of several decades ago the early 21st century edition could be in matters of structure and authority. I read of lay people who were charged by their bishop with starting a new parish, from the ground up. It was done, of course, in close collaboration with diocesan priests, especially those who oversaw the sacramental matters in the parish. Still, it was light years distant from anything I could have imagined as a child Catholic in the 1950s and '60s.

At the gathering in Florida I met two women religious from the Southeast, which has experienced a flood of new Catholics from the North and Southwest during the past two decades. The two nuns and another of their order were overseeing the running of three parishes. One of the nuns had been in charge of a parish for some 18 years.

Such tales began to suggest to me that emergence is a relative term in certain circumstances. A lot of what might be seen as the future has fully emerged and is on the way to maturity. No theological intrusion on the prerogatives of the ordained intended, but there are some rather experienced and practiced lay ministers out there.

This matter of lay responsibility increasing as clergy numbers decline is a delicate one. To what degree should necessity be credited for giving birth to innovation? Is a theology of lay involvement built around the numbers, in a sense clothing the invention in respectable garb? Or has the theology been there all the time waiting to be applied?

In his talk at the Florida gathering, Bishop Cupich recalled the remarks of a woman who was a long-time lay minister. When she reflected, he said, "on how lay ministry has so enriched the church, to the point that future generations will benefit from the works she and others are doing, she has come to believe with equal conviction 'that something of me,' as she put it, 'will also continue to live in the church after I die, because this is Christ's work and we believe nothing of his is ever lost."

Ministry, he continued, is not something apart from the church, "a reality in its own orbit," but "belongs to the nature of the church in which Christ exercises his ministry" for the salvation of the individual and of the world. As such, he said, any discussion of the practice of ministry "must be closely tethered to the organic whole of our faith tradition, since that is ministry's only authentic context."

In the same vein, he said, the new enthusiasm for calling lay people to ministry in the church "has to be matched by a similar urging of vocations to the ordained ministries."

Indeed, there are competing tensions involved in choosing any approach. Some believe that every parish has a right to a priest/pastor. If that is the case, given the growing priest shortage, it only stands to reason that parishes keep diminishing in number to match the number of priests.

If the necessity of a priest for every parish is an organizing premise, then it follows that maintaining the integrity of an existing community is a less important premise.

If keeping the community intact overrides the need for a priest in every parish, then the concession is that a priest's relationship with a parish takes a back seat. However, it could be argued that in many dioceses that keep rotating priests on, say, a six-year cycle, that relationship is not a primary focus to begin with.

In the end, theological considerations aside, the decision is often based on pressing financial and personnel considerations. They were certainly a driving force in Cleveland, where Bishop Richard Lennon, in the final phases of a reorganization of the diocese, announced in March: "Gone are the days when parishes could have two or three or four priests or more. The church is being stgrained in its resources. We had to face reality and do something.

That "something" was to ultimately merge and close churches for a net loss of 52 parishes by the end of June 2010. Those figures were recently amended when Lennon reversed his decision to close two parishes. Other parishes are preparing appeals to Rome and may remain open until the process is completed.

In his explanation, according to the Akron Beacon Journal, Lennon cited three principal reasons for his decisions – population shifts to the suburbs, financial hardship and a dwindling number of priests. In Cleveland, economically hard hit even before the current recession, 42 percent of parishes were operating in the red. The number of active diocesan priests has decreased from 427 in 1990 to 257 today.

Cleveland might stand as an example of trying to hold the line on allowing only the ordained to oversee parishes. But in a wider view it is apparent that the church is struggling to maintain the centrality of the Eucharist while also upholding the integrity of parish communities.

Remaining a "Eucharistic people," however, may require new thinking as circumstances continue to force alterations to the old models.

Parish | Journalist explains why he's on the road