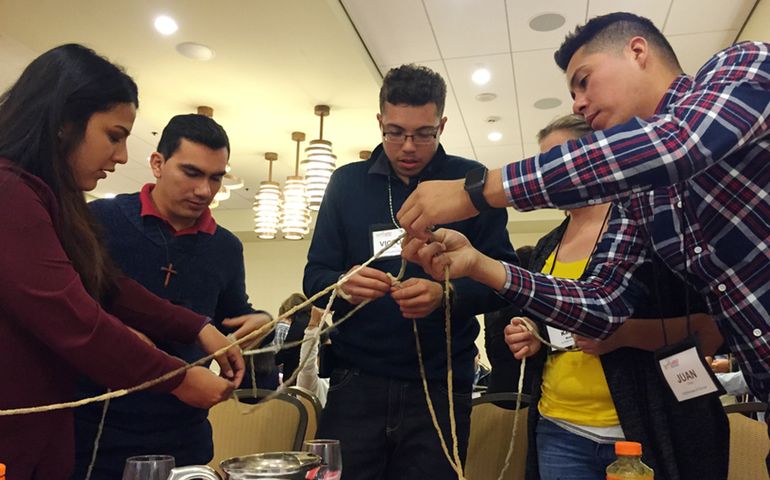 As a team-building exercise, La RED’s conference attendees were encouraged to a build a net – a red – on Oct. 22 in Seattle. (NCR photo/Soli Salgado)
This article appears in the La Iglesia Hispana feature series. View the full series.

Seattle — The next generation of Catholics is flipping the model "Believe, belong, become" on its head.

"For our parents, it was always I believe, therefore I belong to the church," said a young woman at La RED's annual conference in Seattle Oct. 22.

"But the reality now is that [young Catholics] need to feel like we belong before we can believe," she said — initially on the topic of young Catholic Hispanics, but eventually referring to general youth ministry in the United States.

The future of the U.S. Catholic church may depend on providing that sense of belonging, and particularly to Hispanic youths: Sixty percent of U.S. Catholics younger than 18 are Hispanic, according to the U.S. bishops' Secretariat on Diversity in the Church. Yet, despite their commanding majority, roughly a quarter of dioceses have a director of youth ministry for Catholic Hispanics, according to a recent Boston College study.

La RED (Spanish for "the net") is a national network of Catholic organizations and pastoral ministers devoted to Hispanic youth and young adults. Convening in Seattle Oct. 20-23, its annual conference brought together more than 100 members to reflect and learn from the network's past, discuss and analyze current shared realities, and ponder what the future of Hispanic youth ministry may look like.

Such dialogues come at a time when the Catholic Latino community throughout the country is organizing itself at the grassroots level through the V Encuentro — a structured four-year conversation among Hispanic Catholics, beginning in parishes and ending on a national stage in 2018.

The common denominator in both the Encuentro process and La RED is a Latino community "that is still in the process of defining who they have to be and who they are in relation to what God is calling them to be here in the U.S. church," said Juan Pablo Padilla, coordinator of Pastoral Juvenil Hispana for the Young Adult Ministry Office of the Chicago archdiocese. "It's about how do they define themselves and help the bishops in this country understand who we are as people."

Referring to the Encuentro as a lifelong process, Padilla said addressing youth ministry is a "continuation of that life journey. ... The whole point is to see how we can help young people, from our lens, connect with Christ, connect with the cause of Christ, and follow that mission in life."

But ministering to this demographic must evolve with their needs: What was once a group of largely first-generation immigrants, Hispanic youths today are diverse even among each other.

Ranging from first- to fifth-generation Americans are immigrants or children and grandchildren of immigrants from 22 Latin American countries. Some are bilingual, while others strictly speak English or Spanish.

So, while 93 percent of Hispanics under the age of 18 are born in the U.S., according to the Center for Applied Research in the Apostolate, those in youth ministry should never stop paying attention to the spectrum of Latinos at hand, said Norma Velez de Garcia, coordinator of multiculture youth and young adult ministry for the diocese of St. Augustine, Fla.

"That's why we have to pay attention and not forget about anyone. When they come here, they might think, I'm Latino but I'm not American, and I'm still learning English. It's not easy for them — they might not have access to the college campuses where the programs are. So, we have to be there for them," she told NCR.

Empowering current leaders with resources to reach these new generations who are looking for a space within the U.S. church should be a priority of Hispanic youth ministry, said Walter Mena, an adviser of La RED and director of formation programs at Instituto Fe y Vida — Institute of Faith and Life.

"We have to look for this new generation, while strengthening the young people who already have the training and understanding of their own discipleship and vocation to serve the new ones," said Mena. "Like Pope Francis said, we must go where the people are and accompany them."

The goals of Hispanic ministry are no longer about "knocking to get into structures," Padilla said, because, as evidenced by the conference, a large number of Hispanics are already working as professionals for their dioceses, handling Hispanic ministry for both youth and adults.

"We're already inside the structure, but now with the great responsibility of bringing the gifts of our ministry to the larger mainstream church," he said. "I don't necessarily want to assimilate Hispanic ministry to the larger church, because it'll always continue to be its own identity and have its own way of expressing its faith — that should always be respected — but how do we integrate the gifts and all the great things we've developed throughout the years, including the leaders? It would be wrong for us to think that our leaders are just leaders for the Latino community.

"How do we continue our relationships with the [U.S. Conference of Catholic Bishops] and other organizations not traditionally connected to Hispanic ministry, but that may be good stakeholders and have a lot to benefit? ... In the words of Pope Francis, how do we continue to be bridge-builders?"

Beyond matters of self-identifying and internal Latino outreach, many concerns that Hispanic youth ministers shared over the weekend may strike familiar with most youth ministers throughout the U.S.:

In addition to catering to Hispanics of all backgrounds and experiences, youth ministry must also appeal to this demographic by trying to answer more complex questions, Padilla said.

"More and more, Latinos my age or younger are not necessarily fine with Catholicism as a cultural thing — it's more like, it has to mean something, it has to give my life purpose. And if they're asking the questions of purpose and meaning, and those answers are not being delivered by their faith or church communities, they will be found elsewhere, and they will move away from the church and the sacraments if we don't connect what faith life as Catholics means to everyday living as young adults."

While the rest of the world sees an aging Catholic population, the U.S. sees a young one in its growing Hispanic community. This, Padilla said, puts us in a "privileged position" and should be taken as a "powerful sign of hope."

To the delight of La RED's veterans, more than 25 attendees at this year's conference were younger than 30. And the network is getting both younger and larger: Velez de Garcia told NCR that they've recently added 25 new members, from national organizations to diocesan representatives.

Veronica Mendez, a 23-year-old who works in Hispanic youth ministry for the Seattle archdiocese, said the "integrity of the whole community is my big issue right now — how to connect Latinos with other Americans, and getting the Anglo communities to come to us, too, and see how we manage things differently."

That others were going through the same problem — trying to unite the communities while ministering to the specific needs of Hispanics — was a welcome revelation, she added.

Francis, who was constantly invoked and quoted throughout the weekend, proved to be a model for this group in Seattle. Several attendees said he demonstrates how Catholic Latinos — not "Latino Catholics," as one member noted — should act toward the rest of the U.S. church.

Just as the pontificate does not belong exclusively to Argentina or Latin America, but to the whole church, so, too, do the fruits of U.S. Hispanic youth ministry belong to all Catholic Americans.

[Soli Salgado is a staff writer for Global Sisters Report. Her email address is ssalgado@ncronline.org.]