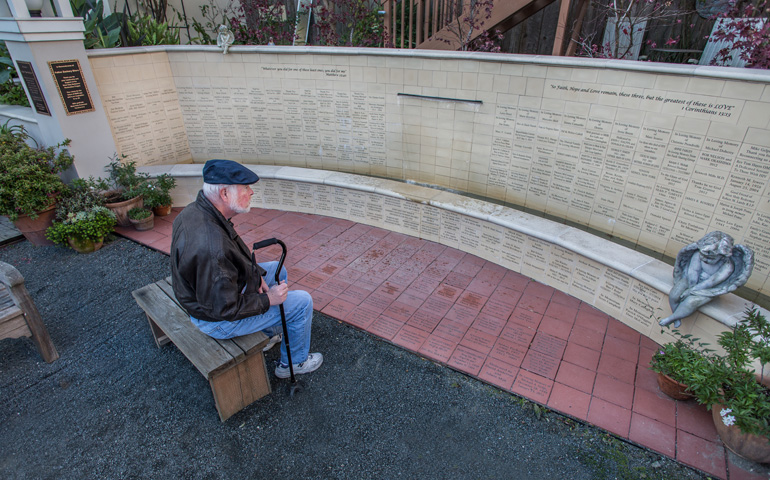 Pete Toms, coordinator of Most Holy Redeemer's AIDS support group, looks at the memorial wall in a garden behind the church. (Dennis Callahan)

This is the fourth in a five-part series about San Francisco's Most Holy Redeemer Church. Each day this week, we will publish one part of this story. Find all parts here.

Most Holy Redeemer Church has a long history of ministries to the homeless and the sick, dating back to the early 1980s. It was in those years that a 40-year-old priest, Fr. Anthony McGuire, came to MHR as its ninth pastor. The parish was at a low point, with only some 100 people attending various Sunday Masses.

The story is that McGuire, after some months of confusion, entered the church one day and knelt before its central stained glass window, a depiction of the Risen Christ. "It was a soothing kind of experience," he told Jesuit Fr. Donal Godfrey -- who says he is gay, frequents the parish and has written about it -- who recorded the moment in a 2007 book, Gays and Grays: The Story of the Gay Community at Most Holy Redeemer Catholic Parish. In his meditation, McGuire "saw something like a job description -- a plan for the path Most Holy Redeemer would take."

Recalled McGuire, "I brought together two gay men and 10 older women. Everyone recognized something had to be done, that the traditional [style] parish had come to an end."

McGuire emerged from the meeting realizing that while the two groups were different, they shared feelings of isolation and loneliness. The old women had seen their grown children move out; the young men were estranged from their parents.

"I remember the gay men put together a wonderful Christmas crib that year," he said. "We had not had one in the church for some time. The old ladies were so pleased. It brought back to them memories of their own younger days."

A year later, in 1983, after continuing discussions and a parish retreat, the parish decided in an unprecedented move that it would officially begin its active outreach to the gay and lesbian community.

A 1984 parish letter explained the thinking: "We wanted to show ... there was a place for them [gay Catholics] at Most Holy Redeemer and that they would be welcome here, just as most of us on the committee who were gay had been made welcome."

The parish grew in the months that followed. Young LGBT Catholics began to migrate to this unique safe refuge. But what no one in the parish imagined at the time was it was entering a perilous period. MHR was at an epicenter of the earthshaking HIV/AIDS epidemic. It would quickly change the Castro and the parish, reordering its spirituality and ministries.

In the 1980s, fear of HIV/AIDS was rampant locally and across the nation. Rumors of how the spreading disease was transmitted were more abundant than solid medical research papers.

By the end of 1985, known HIV/AIDS-related deaths had grown to 5,686 nationwide. By the end of 1986, the number rose to 16,301. And yet there was no national response. It wasn't until May 31, 1987, that President Ronald Reagan formally addressed the illness in a public speech.

It was against this backdrop of widespread panic and government denial that Most Holy Redeemer formed an AIDS support group in 1985. It was another revolutionary McGuire move. Committee members researched medical findings and passed it on to other committee members and others in the parish. AIDS support group members visited the sick in their homes and on specially designated medical wards. MHR offered Catholic funerals -- and numbers mounted.

"It was harrowing. I used to weep a lot at funerals. There was no break to it. It was one after another after another," McGuire said.

Some today recall almost daily parish funerals, though McGuire says some of these numbers appear to have grown over the years.

"There were many, many funerals," recalled Pete Toms, who was part of the parish AIDS support group from the beginning and continues to coordinate the group today.

Sometimes long estranged parents would show up to see their sons before they died. The older parish women would make them feel welcome and offer comfort.

"You had these older Catholic women going up to a grieving mother and saying, 'Oh, your son was so nice. He was such a good friend and always helped me with my shopping bag. Whatever I needed, he would help.' They were providing much needed solace," Godfrey said.

Recalled Toms: "We worked with people primarily in their homes, helping them, washing them, changing their beds [and] all that stuff, because that was what was needed at the time. We didn't wear protective suits, even gloves. We didn't touch open sores. We kept good hygiene. We wanted it to be personal. Christlike, if you will."

Toms, 72, has seen the nature of the AIDS support group change over the years. It attends to some 80 clients, he said, half of them requiring home visitations.

"When the new medicines came out, so many who had become sick and had been expecting to die, and kind of got their heads around that, now had to come to terms with the fact they were going to live," he said. "It wasn't always an unmixed blessing. People sank into isolation, depression. So we still have to try to get out there and go to them and draw them out of themselves."

Most Holy Redeemer AIDS Support Group has earned much respect as a service provider in San Francisco. Since its inception, it has cared for more than 2,700 people with HIV/AIDS, their families and loved ones. Its dedication and commitment have been recognized with many awards and grants.

One morning, Toms sat quietly staring at a memorial wall on one side of a garden behind the church. It was the result of $16,000 in dedicated gifts. Toms was silent, leaning on a cane. Later, he recalled the years of the AIDS outburst as "a very trying time." But then he added it was also a "grace-filled time, sacred, beautiful in a way -- because I met so many beautiful people I would never otherwise have met."

The AIDS support group might be the parish's longest continuous outreach ministry, but it is not what the parish is best known for locally today. That title goes to its "Wednesday suppers," which have drawn acclaim throughout the San Francisco area.

In fact, they are not "suppers," but are more like banquets. The program dates back to 2001, when it was originally conceived as soup and bread dinners on Wednesdays during Lent. It grew when parishioners asked some local homeless to join them. It morphed again when the parish began feeding young people in need. Finally, it became the program it is today.

Each Wednesday at 5 p.m., some 40 parishioners, along with local high school volunteers, gather in the church hall to prepare food and tables. Some food is donated; the rest is purchased with parish money provided by three annual donations. The idea is not just to feed some people in need but to feed them well, treat them special, and help them, if only weekly, feel like they are part of a community. The guest list is generally kept below 120.

The dinner is multicourse and prepared by a chef and several sous chefs. The atmosphere is festive.

Sitting at a table one evening, a guest who identified himself only as Wayne called the Most Holy Redeemer Wednesday evening meal "the best served in the city." Wayne, who is homeless, explained he came to San Francisco in 1987 from Texas and "has been touring the city ever since."

Kathleen Purcell, who has been involved in these suppers since the beginning, calls them "my Eucharist. This is sacrament to me; this is community. When I'm in hard times in my life, what's kind of remarkable is the folks here provide me affirmation, love and support. So it's very reciprocal. I think all of our volunteers experience that."

Purcell lost her teaching job in an Oakland, Calif., Catholic high school because she refused to accept a new teachers' contract that demanded employees' personal and professional lives conform to Catholic teaching. Although she is not gay, she said she did this because of her lifelong beliefs about justice and solidarity with LGBT people.

While the parish focuses on table service, no one is turned away. Brown bags with food are distributed for the overflow outside the church. Additionally, diners leave with bags so they have meals for the next day. Pharmaceuticals are provided, as well as medical care. Physicians are frequently on hand, as are barbers and specialists in foot care.

Wednesday is not the only night the parish opens its doors to people in need. The parish hosts a wide assortment of addiction recovery programs. Twelve groups use MHR property, each meeting weekly.

Besides its social ministries, MHR boasts other forms of evangelization, including an assortment of adult education programs. In January, an insert in the parish bulletin advertised a "Women of MHR" discernment day featuring Jenny Girard Malley, executive director of the Bay Area Companions in Ignatian Service and Spirituality.

The parish also has a "Reconnecting" program for lapsed Catholics. Many MHR parishioners share stories of having left the church for years after finding themselves unable to reconcile their Catholicism and their personal gender issues.

Nanette Lee Miller tells a typical story. She grew up Catholic, married, but eventually recognized it wasn't working. After years of counseling and discernment, she realized she was gay. She went through what she terms a "friendly divorce" and moved back to San Francisco.

"I always felt I had a spiritual bent, but never quite felt comfortable in a Catholic parish," she said. So she tried New Age, Buddhism and the Episcopal church. But her spiritual quest went unfulfilled until she found Most Holy Redeemer.

"I think the most important feeling [at MHR]," she said, "is its warmth, its welcoming and acceptance." The experience was so gay-friendly that her partner decided to become Catholic.

Miller became increasingly active in the parish, and eventually president of the parish council. Through her parish activities in the 1990s, she and her partner got to know San Francisco's then-archbishop, William Levada (later the cardinal prefect of the Congregation for the Doctrine of the Faith). Levada invited Miller to join the San Francisco archdiocese's Catholic Charities board as its first openly gay member, and eventually she joined the archdiocesan finance board, a position she has held under each of the last three archbishops.

Part five of this story will be published on Friday, March 20.