Life of a parish, the real jewels of the church 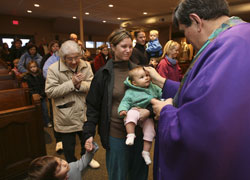 Our parish was “restored,” “remodeled,” “renewed” or “ruined” a few years ago. The verb choice varies according to the liturgical politics of the speaker. If the visitor decries the lack of a tabernacle above the high altar, I know what’s coming as surely as I do if another visitor approves the front three ranks of moveable wooden chairs.

And don’t get me started on the doubled-edged sword – or butter knife, depending upon one’s point of view – that is “On Eagle’s Wings.”

As we are in the Age of the Parish Mission Statement, I sometimes think mother church should take a page from Merle Haggard’s song and simply headline out bulletins and bulletin boards with his immortal phrase, “Mama Tried.”

Of course, for the cognoscenti, one need only mention the name of the liturgical consultant who helped us with the work – Fr. Richard Vosko – and the response is immediate and strong. Like a character in a 19th-century melodrama, Vosko’s appearance on the stage elicits either cheers or boos but nothing in between. Indeed, I am told that in some circles he is known, like a liturgical Vlad the Impaler, as “Vosko the Destroyer,” in which case he needs to lose the earth-toned hush puppies and look for a cape.

I mention this because I tend to think of the great divide only when we have a visitor to the parish. The features of the building (so interesting when we were in the planning stage and under construction and when we first moved back into the space) have dimmed for me as the features of parishioners’ faces have grown ever brighter.

I can’t remember the last time I registered the new baptismal font -- an item on the liturgically correct/incorrect checklist -- except to remember the days our grandchildren went down into the water and came up wet and screaming, or the Easter Vigil when the numerous newly adopted children in one parish family went in and came out of the water smiling all the way. I remember other children, other adults in that life-giving bath, all of them greeted with songs and tears and prayers and clean towels.

I remember the coffin of a friend’s son as it lay before the font. Her son had killed himself, and Suicide had become both his fate and his name. The celebrant called out the name given him at his baptism and reminded us that he had died with Christ and so had died, though perhaps himself unable to comprehend it, in the hope of everlasting life.

My daughter turned to me and said, “They’ve given him his name back.” The church had restored his name as its waters had given him life. I doubt a single member of our community that day was remarking upon the size or placement of the font, except to give thanks for its power and its presence.

There are things I do register. I check Sunday after Sunday to see if Helen is in her customary seat near the west side of the church. Since Mitch died, we worry about her ability to make the 8:45 in bad weather. And then I glance across the altar to the section reserved for the deaf in our parish. I want to see Connie there with her son, Roy, and her granddaughter, Katarina. Connie has had some nasty falls, and if she is not at Mass, chances are she is in the hospital.

I look for David and his twins. For Marge and her daughter. For Will. For Barbie. For Jerry, due back from India. For Rita. If Bob is with her, I know he is having a good day. I look for Michelle and Chuck and Barbara, all of whom have suffered and survived.

I look at the choir and see Mike and hear again as he sings the names of our beloved dead each November. I remember the first November when his own daughter’s name was among those he sang. I look for Tom and Michael.

I look for Pat, who, when he is not with us, is ministering at the county jail. I look for Esperanza, who will watch the servers and shove them forward when they forget their jobs.

I look for John Francis, who bounces, and Juliet, who grins, and Jane, who wanders over for a hug.

I scan the entrance for our grandchildren, who clump a noisy counterpoint to the opening hymn as they race up the aisle and into our laps.

I check the back of the church for the dark heads of Mia and Nico bent over the baby’s own dark locks. I can feel peace as I count them like a mother at bedtime or mealtime, each beloved face in its place.

And I know what the visitor cannot -- the life of this parish that was vibrant and strangely beautiful even when we stood together under scaffolding and brought stadium blankets to wear against the chill from unfinished walls and windows.

I’m glad we kept the old windows and grateful we had the statues repainted, but St. Mary’s true ornaments have always been built of the same sturdy stuff as her walls and roof: the people who gather here to pray and to ask for prayer, to praise and to give thanks, to serve God and one another.

The story is told of St. Lawrence that upon his arrest during the Valerian persecutions in the third century, he was ordered to surrender the church riches to Roman authorities. Deacon Lawrence, we hear, went out and gathered people, members of the church, and brought them before the Roman prefect. “Here,” he said to his accusers, “are the jewels of the church.”

I know just what he meant.

[Melissa Musick Nussbaum lives in Colorado Springs, Colo. She is coauthor, with Jana Bennett, of Free to Stay, Free to Leave: Fruits of the Spirit and Church Choice.]

Parish | Life of a parish, the real jewels of the church

Parish roundup: New app for the hearing impaired, faith in running for office, welcoming with pie

The Holy Spirit lends a hand to sister parish in Nicaragua