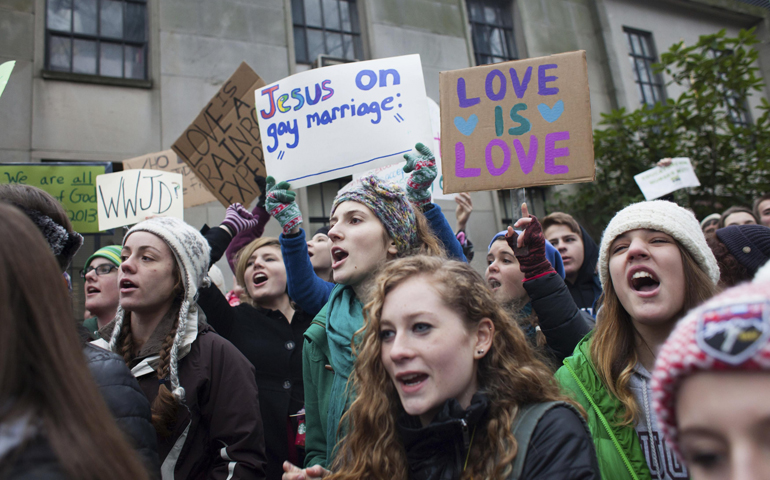 The final week of January marks Catholic Schools Week in the United States. The annual celebration centers on what's right with Catholic schools, but this year, in the Seattle area, some hope the week concludes with a nationwide protest of what they believe is wrong.

On Dec. 19, students at Eastside Catholic School in Sammamish, Wash., staged a sit-in in their cafeteria and gymnasium upon learning that Mark Zmuda, who married his male partner in July, would no longer serve as vice principal of the high school and middle school. Zmuda, 38, also coached the high school swim team.

"It's a firm decision," Holy Names of Mary and Jesus Sr. Mary Tracy, the school's president, told the Bellevue Reporter Dec. 19. "If the teachings of the church change, I'd hire him back in a minute. He's a wonderful educator."

Mike Patterson, the school's attorney, told NCR that after learning of Zmuda's marriage, the school consulted with the Seattle archdiocese, which advised that as a Catholic school, it must adhere to the magisterium.

Since 2012, at least seven other teachers or staff members at Catholic schools have been terminated or resigned after the discovery of their same-sex relationship. Others have been fired from parish positions.

While Patterson said there was "absolutely no question" that Zmuda resigned from his position, the former teacher has challenged that stance.

"To set the record straight, I was terminated," Zmuda said in an online interview conducted by one of his former high school students. He referred to a Dec. 17 meeting with Tracy, Patterson and Gene Colin, chair of the school board who stepped down from his position Monday.

"I asked if it was a breach of contract, they said no. I said, 'Did it have anything to do with my job performance or evaluations?' and they also said no. They said it was because I was married to a man and violated Catholic teaching," he said in the interview.

But Patterson said the sides were working on a separation agreement "that would give him a transition in a pastoral way," and that he even offered to put Zmuda in contact with public schools in the area. The attorney, speaking to The Seattle Times, also dismissed Zmuda's claim that he was asked whether he would seek a divorce in order to save his job.

Zmuda married eight months after Washington passed Referendum 74, which legalized same-sex marriage in the state. The buildup to the November vote included a high-profile campaign against the referendum led by the state's Catholic dioceses.

The termination of Zmuda, though, has led to another movement, one organized by Eastside Catholic students. A day after the sit-in, where more than 300 students participated, about 80 protested outside the archdiocese's offices, where Seattle Mayor-elect Ed Murray, gay and Catholic himself, joined them. They also took their cause to social media, using the Twitter hashtag #KeepMrZ2013 and a Facebook page to organize further action.

At a press conference Jan. 4, students announced plans for a nationwide "Z-Day" on the last day of the month. They encouraged all supporters to wear orange -- one of the school's colors -- in solidarity with Zmuda, "as well as expressing our hopes for an enlightened perspective on issues of sexuality in the Catholic Church."

"The Gospel compels us to demonstrate compassion and love in all our actions, and Mark Zmuda has always done just that. It is a shame then, that the school, in conjunction with the Archdiocese of Seattle, has chosen to conduct itself in such a manner that contradicts the message of social justice that we as Catholics are all called to uphold," the students' statement read.

They also called for future employee reviews to consider the person's "job performance, character, and embodiment of Catholic social teaching" when adherence to Catholic teaching -- whether same-sex marriage, birth control, cohabitation or other matters of sexuality -- is called into question. A Change.org petition, which had garnered more than 31,000 signatures as of Thursday, called for the U.S. Conference of Catholic Bishops to "change the Roman Catholic Church's stance on gay marriage."

"The student body is outraged that an incredible administrator, coach, and human being was fired solely because of his love and marriage for another human being. We are uniting in order to change the Catholic Church's opposition of gay marriage," it read.

Patterson said the school applauds the students for exercising their First Amendment rights and asked that others respect the school's rights, as well. He told NCR that the school plans to hold a workshop to discuss how to effect change when you disagree with a law or policy. For their part, the students have resolved to alter Catholic teaching on same-sex marriage, vowing to write letters and lobby church officials.

"This is only the beginning. We believe too strongly in this movement to let it die down once the school year resumes. The notion that the administration chose to act on this specific transgression under its interpretation of Church doctrine, but disregarded any other, more private affairs, sends a mixed message to the school community," their statement read.

A version of this story appeared in the Jan 17-30, 2014 print issue under the headline: Loss of vice principal sparks student outcry at Catholic school.