Masses go digital with livestreamed services; find out how to join 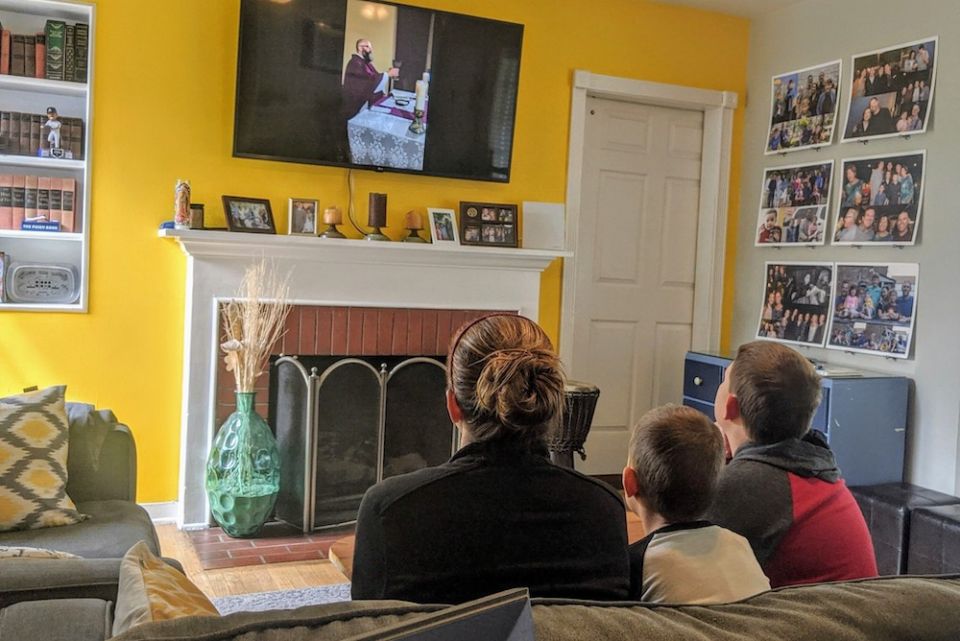 Kristina Ortega and her sons at home watch Jesuit Fr. Brendan Busse celebrate Mass as it was livestreamed from Dolores Mission Parish in Los Angeles on March 15. (Brady Lowdermilk)

Catholic services you can watch live and recorded online

Find a list of Catholic worship services, including daily and Sunday Mass that you can join, at the end of this article.

At first, Mike Erickson was hesitant at how people would react to the first livestreamed Mass at St. Patrick Parish in Waukon, Iowa, where a laptop was set up on the altar to record celebrant Fr. Mark Osterhaus.

But Erickson, faith formation director at the parish, said after praying in the empty church alongside Osterhaus for a few minutes, he felt a "powerful connection" with the 200 viewers.

So when Monday's directive arrived from the Dubuque Archdiocese to cancel all in-person Masses, Erickson "got acquainted with Zoom quickly" and served as lector for the parish's inaugural livestreamed Mass. (Zoom is a videoconferencing app that can be used for calls, Masses, concerts, meetings, etc.)

Dioceses across the world canceled in-person services in response to the growing COVID-19 pandemic throughout the past week. This new reality created a massive new viewership for televised and livestreamed Masses and worship rituals, and Catholics swiftly met the spiritual need. 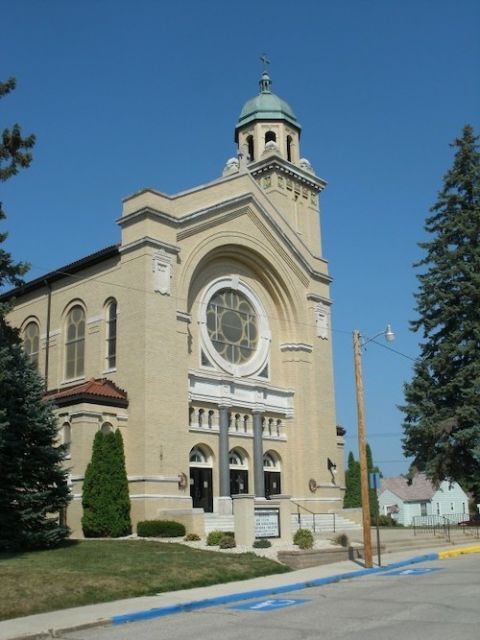 Screenshot of St. Patrick Parish church in Waukon, Iowa, from their website

Televised Mass is not a new concept in Catholic life, with established options including a half-hour Sunday Mass at Mercy Home for Boys and Girls in Chicago, that airs on WGN every Sunday at 9:30 a.m. CDT. According to Fr. Scott Donahue, Mercy Home's president and CEO, the typical viewership of 60,000 to 70,000 people per week has already greatly expanded due to the pandemic.

"I think the way Mercy Home sees the [televised Mass] relationship is to afford people the opportunity to pray in a larger community and to receive the prayer of the church. We ask viewers to pray for the mission of Mercy Home, which has cared for well over 1,000 children and families. And we pray for them [viewers]," Donahue said.

Following the service, Old St. Pat's posted photos of families viewing Mass together, and encouraged parishioners to post photos using the hashtags #WeAreOSP and #StillTogether. The parish will be offering another hour-long live-streamed Sunday Mass on March 22 on their website, where viewers can also find a worship aid.

Other parishes are taking a less formal approach and livestreaming their services through cell phones on social media. In California, Kristina Ortega, a theology teacher at Flintridge Sacred Heart Academy in La Cañada, said she, her husband and two sons viewed Spanish language Mass along with 1,800 other people on the Facebook page of Dolores Mission Parish in Los Angeles this past Sunday.

"It's our home parish, and it was nice to hear Fr. Brendan [Busse]'s voice and see the names of our friends pop up as 'also viewing.' The predictability of the liturgy and the rhythm of the prayers and responses is so familiar that it calms and centers me," Ortega said in an email interview.

The need for prayerful centering led Tony Alonso, liturgical composer and director of Catholic Studies at Candler School of Theology at Emory University in Atlanta, to livestream a prayer service, "Evensong," this past Sunday on his personal Facebook page. Though it was the first time he had planned the prayer service, more than 3,300 people participated.

"There are so many words right now: news programs, press conferences, breaking news alerts. But what I like about evening prayer is that it is mostly a pattern of song and silence. I needed that so deeply right now. And it turned out others did as well," Alonso said in an email interview. 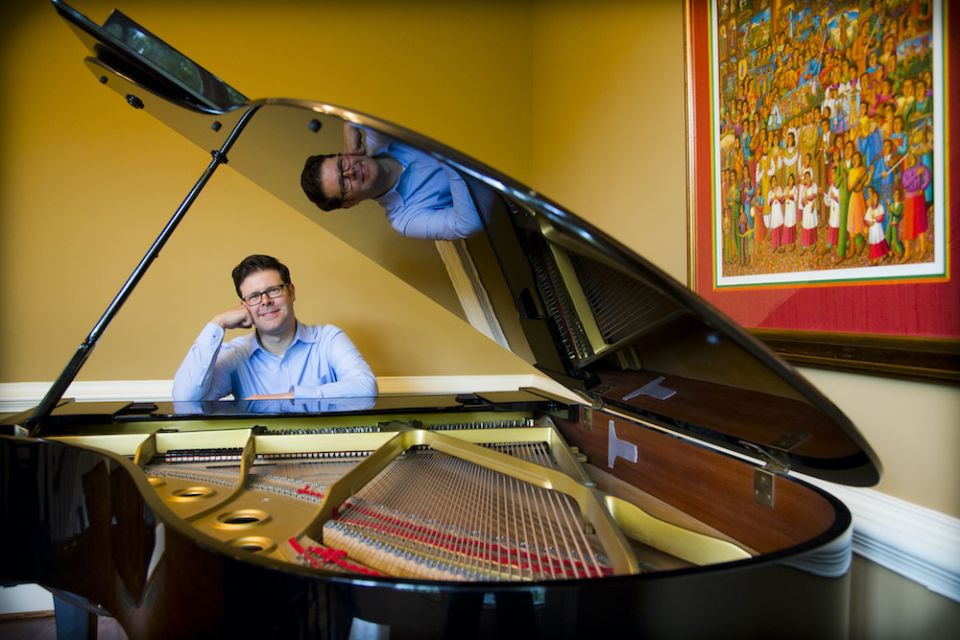 Catholic sisters also answered the call for virtual prayer sessions. The Benedictine Sisters of Erie, Pennsylvania, adjusted their Friday Lenten Immigration vigils into a livestream format, which can be viewed on Fridays for the remainder of Lent on their website at 12:15 p.m. EDT.

In an attempt to organize information on so many new livestreamed services, Michael Bayer, director of evangelization and adult formation at St. Clement Catholic Church in Chicago, created a national crowdsourced database, to which anyone with information on Catholic livestreamed schedules can contribute.

Viewing the Eucharist rather than physically participating in it hearkens back to the Catholic tradition of the Middle Ages known as "ocular communion" — or receiving the sacrament by gazing at, rather than eating, the Eucharist.

This growing pandemic could, as this New Yorker article suggests, give rise to new forms of ritual and human behaviors — including religious rituals. In this new age of anxiety, Alonso, Erikson and other leaders have already begun to meet Catholics' spiritual needs with creativity.

"The coronavirus is the main topic of conversation and you hear the fear and anxiety in people's voices, and you feel it in yourself," said Erickson of St. Patrick's in Iowa. "To create the sense of a large community, even though it's just Father and I in this large church, that 'we're not really alone' — that connection is powerful."

Guide to livestreamed and televised Masses and prayer services

All services listed are in English, unless noted. 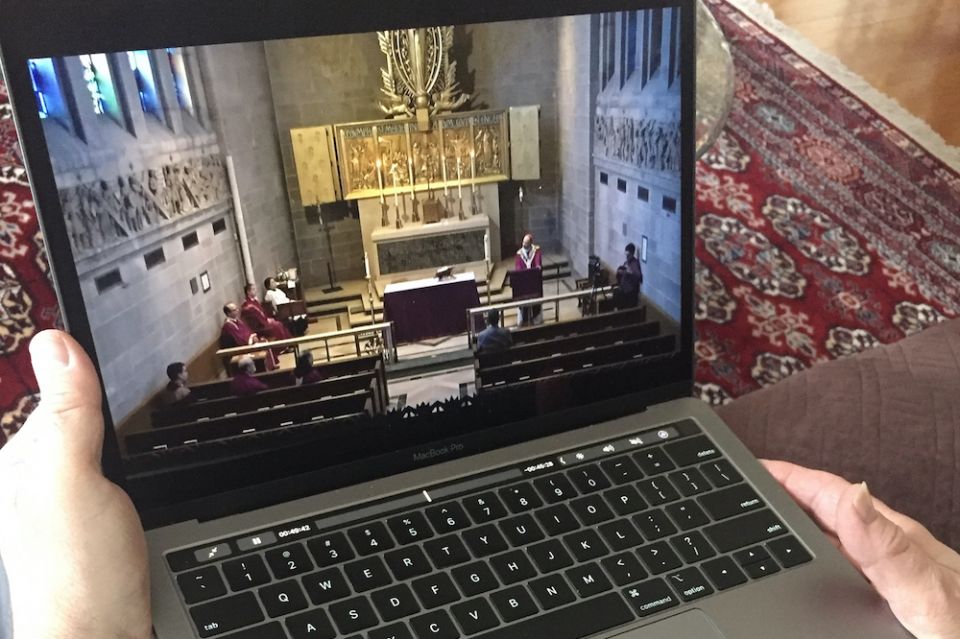 A viewer watches a livestream Mass from the Cathedral of Mary Our Queen in Baltimore celebrated by Archbishop William Lori and concelebrants March 15. At one point nearly 1,800 people were watching the live feed, more people than can fit in the cathedral. (CNS/Arlington Herald/Ann M. Augherton)

Related: Still, we find ways to connect
A version of this story appeared in the April 3-16, 2020 print issue under the headline: Masses go digital with livestreamed services; find out how to join .

Parish | Masses go digital with livestreamed services; find out how to join