Skip to main content
News
This story appears in the World Meeting of Families feature series. View the full series. 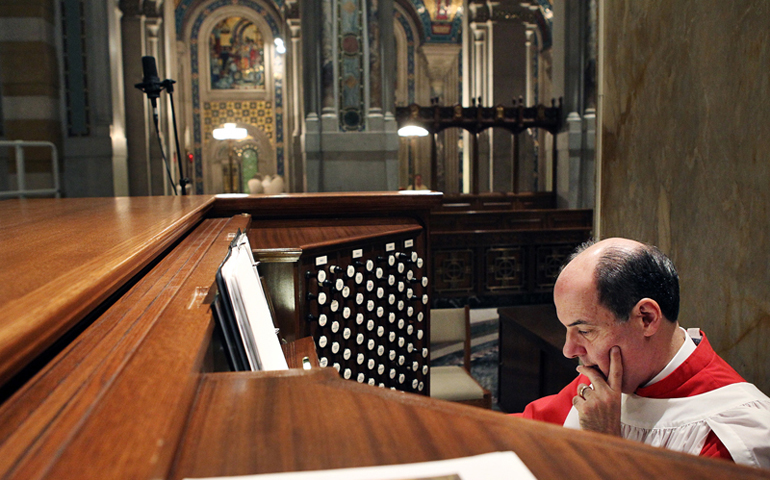 The head of liturgical music for the Philadelphia archdiocese, who was also to play a key role orchestrating the huge outdoor Mass concluding Pope Francis' trip to the U.S. in September, is resigning his post over long-standing differences with Archbishop Charles Chaput.

John Romeri, who has headed the archdiocesan liturgical music office for five years, said he will resign effective June 30 because "there are simply irreconcilable differences" with Chaput over the role and style of music at Mass.

Romeri did not respond to requests for comment, and it was unclear whether he would still play a role in preparations for the papal visit.

A spokesman for Chaput, Kenneth Gavin, said in an email that he could not comment on personnel matters and "there are no additional updates." But he said that the archdiocese "will be prepared for the visit of the Holy Father on all fronts, including music for the Mass on the Parkway."

The Ben Franklin Parkway, which runs through Philadelphia, will be closed to accommodate the more than 1 million pilgrims expected to attend the Sept. 27 papal Mass. It is part of what officials say will be the largest series of public events in the city's history.

In his resignation announcement, which he buried in a list of liturgy news last month, Romeri indicated that he and Chaput had clashed almost from the time Chaput was appointed to Philadelphia in 2011, a year after Romeri arrived.

Romeri wrote that these "several years of discontent" on Chaput's part culminated with the music Romeri arranged this April for Holy Week and Easter. The approach, he said, "was not well received by the archbishop."

"While at this point, I am not sure just what my next musical adventure looks like, it is absolutely the right thing for me to leave this present situation," Romeri wrote. He said he would remain as music director for Philadelphia's Cathedral Basilica of Sts. Peter and Paul through the summer.

The resignation sparked an online debate in the beehive world of Catholic liturgists, where even the smallest tweak to a rubric can become a source of extended discussion.

But it also has a wider resonance because Romeri is vice chair of the two committees organizing the music and rites for various events during the Philadelphia leg of the Sept. 22-27 papal visit.

Francis is to visit Washington, D.C., first, then New York. He is scheduled to end the trip by spending two days in Philadelphia to close the church's World Meeting of Families.

"A change like this ahead of the papal visit must be causing a mini-meltdown in the Archdiocese," Nathan Chase wrote in a post at a well-known Catholic liturgy blog, Pray Tell.

A clash over liturgy so close to such a major papal event, and one in which the liturgy plays such a central role, could complicate what is already a huge undertaking for the Philadelphia archdiocese and the Vatican. But such hurdles are hardly unprecedented.

Papal visits are tremendously complex, stressful and expensive projects for the dioceses hosting the pope. There is intense jockeying among bishops to try to host the pope and much maneuvering within a host diocese over where the pope will visit and who will get to meet him -- and how each papal event will be organized.

Then everything must be run through a committee and approved by the Vatican. The process almost guarantees arguments, especially over liturgies, which are often flashpoints for internal church battles.

Outdoor papal Masses also tend to be huge events that must communicate a sacred rite in broad strokes to a diverse assemblage. So the music and design often have a popular, modern style that can irk liturgical traditionalists.

Many speculated that this difference in liturgical tastes might have contributed to the falling out between Chaput and his music director.

Romeri is said to have more of a "high church" sensibility in liturgy than Chaput, who has expressed a preference for the newer Mass in English and simpler styles of worship.

While Chaput is often described as a doctrinal and cultural conservative, in the Catholic church, that does not necessarily equate with liturgical traditionalism, which is its own distinct -- and proud -- brand.