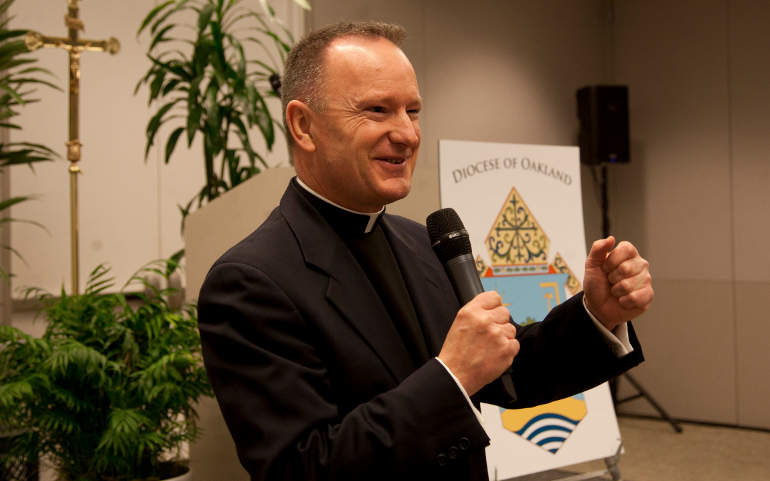 When Jesuit Fr. Michael Barber is ordained as the fifth bishop of Oakland on May 25, he will assume leadership of a large, multi-cultural diocese with a $114.7 million debt and clergy who are frustrated that plans to tackle fiscal problems and administrative inefficiencies had to be put on hold.

Over the past seven months, retired Seattle Archbishop Alexander Brunett, the diocese’s apostolic administrator, explored ways to reduce the debt through a major fundraising campaign and to reorganize some aspects of Chancery administration.

Many in the diocese now worry that Bishop-elect Barber, who has primarily worked as a seminary teacher, spiritual director and Navy chaplain, will have a steep learning curve, something he acknowledged during a press conference announcing his appointment May 3. “I have a lot to learn about the church in Oakland,” he said.

His provincial, Jesuit Fr. Michael Weiler, in a May 3 letter to fellow Jesuits, noted that the new bishop, who has been director of spiritual formation at St. John’s Seminary in Boston for the past three years, faces the “challenge of immediately becoming the ordinary of a diocese with no time to accustom himself to his new role.”

Barber, 58, was a pastor in Western Samoa for two years after his ordination in 1985 and lived at St. Agnes Parish in San Francisco while directing the School of Pastoral Leadership for the Archdiocese of San Francisco from 1998 to 2001. But the majority of his ministry has been outside the traditional diocesan structure.

Barber told the press he first learned of his appointment through a phone call while in his Boston office. A few days later when he was in Washington, D.C. for the April 25 episcopal ordination of Father Robert Coyle as auxiliary bishop in the Archdiocese for the Military Services, USA, he told Archbishop Carlo Vigano, apostolic nuncio to the United States, that he would accept the appointment.

“I don’t know how he [Pope Francis] got my name. We’ve never met,” said Barber, adding that he was “humbled” to be appointed a bishop by the new Jesuit pope. “Maybe he thought I could do in Oakland what he wants to do in the whole church. I am watching him very closely. I want to imitate him.”

In a reference to his lack of administrative experience, Barber noted that when the pope (then Fr. Jorge Mario Bergoglio) was unexpectedly named auxiliary archbishop of Buenos Aires in 1992, he “had to start somewhere too.”

The May 3 announcement of Barber’s appointment came as a surprise, especially to priests who had been called to a May 6 meeting, believed by many to focus on administrative reorganization of the cathedral complex and some aspects of the Chancery. That meeting was cancelled May 2. “While we have been anxious for a replacement to be named, the priests of the diocese were told this would not happen until the fall,” wrote Fr, Robert McCann to his parishioners at St. Theresa Church in Oakland in the May 12 parish bulletin.

McCann questioned the quick scheduling of the episcopal ordination, just a month after Barber accepted the appointment. “This is amazingly fast,” McCann wrote, noting that Father Peter Loy Chong, who has been living at St. Theresa’s while earning a doctorate at the Graduate Theological Union in Berkeley, will not be ordained Archbishop of Fiji until June 8, though he was named a bishop last December.

Others, speaking to NCR on the condition that their names not be used, said that they fear that some in the diocese pushed the Barber ordination forward quickly to stall implementation of the reorganization.

Some saw the reorganization as a partial response to an undercurrent of discontent about Cordileone’s leadership in Oakland that surfaced during a convocation of priests in October 2011, two and one-half years after he came to the diocese.

In two workshops, 59 priests identified issues that they presented to Cordileone. Summary documents obtained by NCR reveal that these included a perception that collaboration and consultation were undervalued in his administration, that an “ascending ecclesiology of the church” was being imposed on religious education training programs that “does not foster a broader ecclesiological framework and theological perspective,” and that morale had deteriorated among Chancery staff and parish priests.

The priests also expressed concern about a “lack of awareness, lack of attention, and a lack of resources to the pastoral and multicultural reality of the diocese.“

The Diocese of Oakland, with 550,000 Catholics, is one of the most ethnically diverse in the country. In the two counties that make up the diocese less than half the population is Anglo. One quarter is Latino with an equal percentage of Asians. Thirty-nine of the diocese’s 83 parishes have Sunday Mass in Spanish. Masses are also celebrated regularly in Cantonese, Ge’ez, Kmhmu, Korean, Mandarin, Polish, Portuguese, Tagalog, Tongan and Vietnamese.

“I look forward to working with so many wonderfully diverse ethnic communities,” said Bishop-elect Barber, who speaks Italian, French, Samoan and liturgical Spanish, in addition to Latin and English.

Perhaps the most pressing problem facing the new bishop will be how to reduce the $114.7 million debt amassed from the construction of a new cathedral, settlement payments for clergy sex abuse, refurbishment of cemetery properties and other diocesan projects.

He will have to decide whether to go forward with an anticipated capital campaign. Mike Brown, diocesan communications director, said liquidation of marketable securities, sale of some real estate and refinancing a portion of the debt are also expected.

Barber said during the press conference that he wants to follow the example of Pope Francis, focusing on the needs of the poor and marginalized. “He wants servant leaders,” he said.

[Monica Clark is an NCR west coast correspondent. Her email is mclark@ncronline.org.]