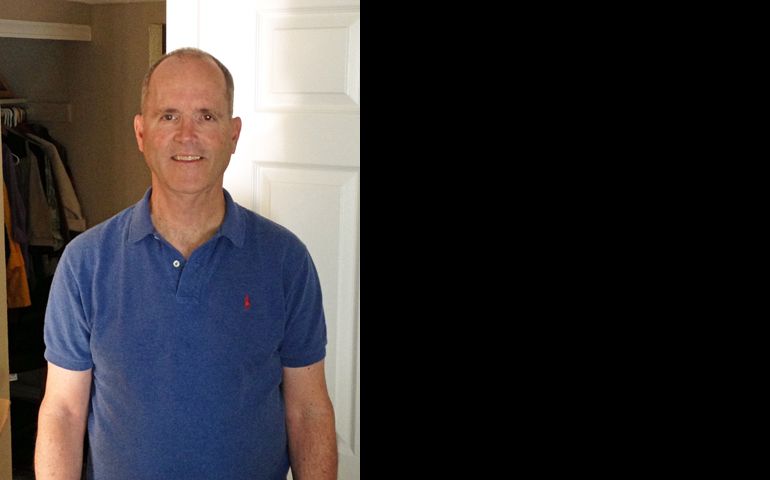 Oakland, Calif. — Every Sunday morning for the last three years, Tim Stier, former pastor of Corpus Christi Parish in Fremont, Cailf., has stood outside Oakland's Cathedral of Christ the Light to call attention to the need for what he calls "structural reform" within the church. Sometimes he is alone, holding a large sign that reads, "Include the Excluded: Women, Gay Persons, Abuse Survivors." At other times, a handful of supporters joins him in the two-hour vigil.

On April 14, the third anniversary of his demonstration, about two dozen adults gathered in solidarity with him. Some were members of the Survivors Network for those Abused by Priests. Others belonged to Women of Magdala, a local group advocating for the ordination of women. There were also gay and lesbian Catholics and a few of his Fremont parishioners.

"It's important to stand with him," said Patty Leal, who has known Stier since he presided at her wedding 32 years ago. "I have such great respect for him. I know what it has cost him to follow his conscience."

Stier, 64, went into voluntary exile from active priesthood in 2005, taking inspiration from Walter Brueggemann's "The Prophetic Imagination," which explores the biblical call to be a prophetic voice within society. His decision emerged during a six-month sabbatical that included time at Weston School of Theology. He said he'd become "increasingly frustrated and hopeless" about the inability or refusal of church authorities to talk openly about such topics as married priests, women priests and clerical sexual abuse.

He'd already had a life-changing meeting in his rectory with a man who was abused as a child by the late Fr. James Clark, who was pastor at Corpus Christi Parish for 21 years.

"I listened for two and a half hours. I haven't been the same since," Stier said. After going into exile, he began reaching out to other abuse survivors, including several who said they were victims of Msgr. George Francis, the now-deceased pastor in nearby Hayward.

Stier found a job with the YMCA, where one of his tasks was to plan the annual Martin Luther King Jr. Fellowship Breakfast. Searching for a theme for the event, he reread King's letter from a Birmingham jail and took to heart King's admonition that when one observes injustice, there is an obligation to speak publicly against it. The idea for the weekly vigil began to take shape.

A few days prior to his vigil's third anniversary, Stier met with Archbishop Alex Brunett, apostolic administrator for the Oakland diocese. Stier told NCR he asked the archbishop to release the names and files of all priest abusers who served in the diocese and to provide full disclosure of all financial costs related to the abuse settlements.

The archbishop "seemed sympathetic, and I was treated respectfully," Stier said. Brunett is archbishop emeritus of Seattle and was named administrator of Oakland last year. He will serve in that capacity until a permanent replacement is made.

Mike Brown, diocesan communications director, said the meeting was "cordial" but said in an email to NCR that "there was no discussion of any requests made by Tim Stier over the years." Rather, Brown said, the meeting was "very much a get-to-know you between bishop and priest."

Stier said the conversation took place, saying the specific purpose of the meeting was to make his requests. He added that he had not had any contact with the two previous bishops -- Allen Vigneron, now archbishop of Detroit, and Salvatore Cordileone, now archbishop of San Francisco -- because he did not feel they were open to dialogue.

Stier said he urged Brunett to be transparent instead of waiting for the courts to make the abuse files public, as happened recently in Los Angeles, Milwaukee and Joliet, Ill.

"Releasing the names of abusers not only tells people, especially survivors, that the church is serious, but it also can help those who have not yet come forward to have the courage to do so," Stier told NCR.

Stier said he believes at least 24 diocesan priests had credible allegations of sexual abuse of minors. Brown could not confirm the number but said it "is in the ballpark." Brown said it would take Dominican Sr. Glenn Anne McPhee, chancellor and victims' assistance coordinator, "days/weeks of research and audit time to formally and accurately" respond to NCR regarding the number of abusers who served in the diocese.

There is no diocesan database where parishioners can learn who these men are.

Brown said all accused abusers are either dead or have been removed from ministry.

Some were named in 2004 during a series of 12 apology services Vigneron held that year in parishes where abuse had taken place in the diocese. Vigneron held another service for survivors at the new Cathedral of Christ the Light in 2008 and formally blessed a Healing Garden on the cathedral grounds requested by abuse survivors.

Oakland Bishop John Cummins held the first "Reconciliation and Healing Service" between the victims of clergy abuse and the diocese on March 25, 2000.

In the April 1, 2013, issue of The Catholic Voice, the diocesan newspaper, McPhee said "priests who have been accused of molestation are regularly monitored by a professional investigator hired by the diocese to ensure that no children or youth are at risk."

Stier, who lives on Social Security while caring for his 92-year-old mother, said he plans to continue his weekly vigil. "I need for my soul to keep doing something public."

[Monica Clark is an NCR west coast correspondent. Her email address is mclark@ncronline.org.]