by Matthew A. DiCenzo, Catholic News Service
Parish
People
This article appears in the The Field Hospital feature series. View the full series. 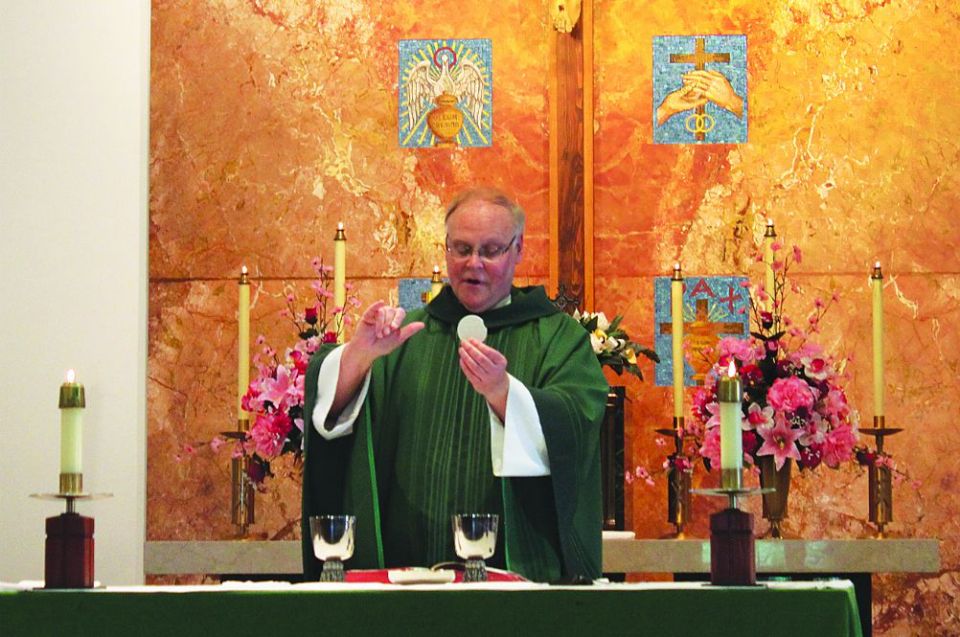 Barnesville, Ohio — Fr. David Cornett, pastor of Assumption of the Blessed Virgin Mary Parish in Barnesville, Ohio, celebrates the 11 a.m. Sunday Mass at Assumption Church in both English and American Sign Language at the same time.

In addition, he serves as an interpreter during the readings and hymns at the Mass.

"For people with physical disabilities, we build ramps," he said after celebrating Mass in Barnesville Sept. 15. "For the deaf, we have to offer sign language. But, if it's not offered, then they're stuck, like a person who has a physical disability without a ramp."

Cornett added, "If deaf people show up at Mass, I sign."

He said that he began signing in Barnesville a little more than a year ago.

When he was 19 years old in the seminary at Divine Word College, Epworth, Iowa, Cornett began learning sign language. He used sign language as part of his ministry in Iowa for the Divine Word Missionaries, as well as in his work in Washington, Chicago and Congo, where he worked for 10 years with the deaf.

As far as he knows, he is the only priest in the Steubenville Diocese who knows sign language. "I am happy I can do it. We need more interpreters and more priests who can sign," he said, noting he is not a certified translator.

At the 11 a.m., Sept. 15 Mass at Assumption Church, five deaf people were in attendance: William and Hilda Kerec, Rafael and Mary Matos, and Michele Kress.

During an interview for The Steubenville Register, the Steubenville diocesan newspaper, Cornett and those five people explained some of the challenges the deaf community face.

William Kerec said Cornett is only the third priest he met who understands sign language. Kerec said he doesn't want to go to a Catholic church unless he can understand the liturgy. He stated: "I can come to church and pray without fear."

He said the deaf can come to church, and Cornett will lead and counsel them.

"We have a National Catholic Office for the Deaf out of Washington," Cornett said. "They have a [conference] every year, usually in January or February, and you'll see all the Catholic priests, nuns and brothers, and laypeople that work in the Catholic deaf community come together. It's just wonderful to experience."

Rafael Matos explained how, when he was in school, sign language was forbidden. He said it is hard for him to communicate. Matos said when it comes to voting for president, he figures out who he wants to vote for by what he reads in the newspaper, since he cannot hear what they say on television.

He also explained how the closed captioning on television is too fast and how the speed needs to be slowed. He explained how when a natural disaster happens, for example a hurricane, the television often does not show the interpreter standing next to the speaker.

Kerec demonstrated an application he has on his smartphone, called "ntouch," which is a video relay service for the deaf, created by Sorenson Communications. Kerec said he uses the application when he does not have an interpreter available, especially when he goes to the doctor's office, to help avoid any confusion with medications. When he dials a person's telephone number, a live video of an interpreter appears. The interpreter translates the sign language to the person that is dialed, conveying the message the deaf person wants to say.

Following the Mass, many parishioners said they are always amazed to see Cornett celebrate Mass in two languages at the same time.

"You can actually feel the signs," said parishioner Sandy Smolira, who is not deaf. "It gives the Mass depth and makes it more beautiful."

Cornett said his passion for helping the deaf began in high school and is driven by getting the Gospel message out to people.

When reflecting on his usage of sign language and his help and care for the deaf community, Cornett stated: "I thank God I have a gift for language."

[Matthew DiCenzo is a staff writer at The Steubenville Register, newspaper of the Diocese of Steubenville.]

The human face of the Blackjewel coal mine bankruptcy

Parish | For Ohio priest, bilingual Mass is in English and American Sign Language