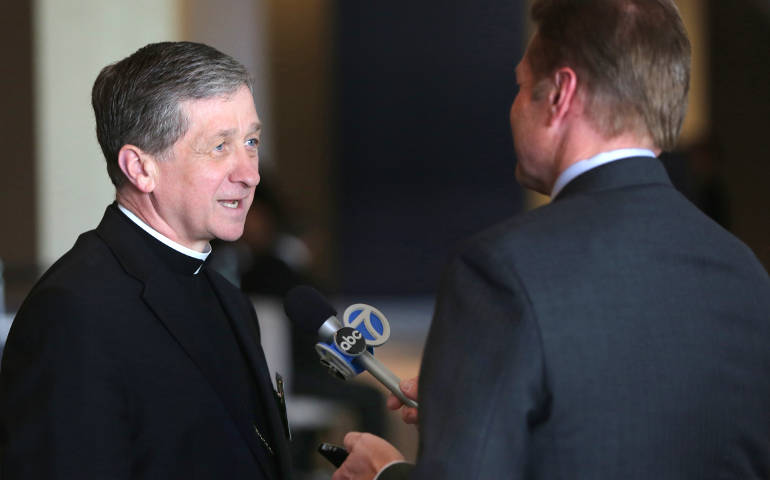 Bishop Blase Cupich talks with a reporter June 11 at the meeting of the U.S. bishops in New Orleans. (CNS/Bob Roller)

Eat at Burger King. By yourself. In street clothes.

If you want to get to know Chicago and those of us who live here, go to the Burger King on Lawrence Avenue, just west of Western Avenue. And, as you’re eating your Whopper, watch the Mexican-American family that is likely to be eating there.

The father is just off work, and you can see the weariness drip off of him. He’s got some menial job — in a factory, or as a bus boy, or perhaps in the kitchen at another Burger King. Those are jobs without much dignity in our American culture, but, with his family, he holds his head high, and his kids chatter with him with great love and respect.

Listen to the two gray-haired, gray-bearded Serbian guys. Unless you’re a polyglot, you’re not going to be able to guess what they’re saying, but you can tell they’ve got strong opinions.

Look at the elderly man in a tie, white shirt and dark suit. He always sits alone at one of those small tables along a wall and does a crossword puzzle.

If you glance around, you’re likely to see some Asian-Americans, a homeless guy snoozing in front of a cold half-empty cup of coffee, African-Americans, at least one well-dressed person with a laptop and a cellphone using a booth as an office, young dudes with a lot of tattoos, women with unusual hair styles, and maybe some yuppies.

Archbishop-elect, 32 years ago, my friend Tim Unsworth wrote an open letter of advice to one of your predecessors, Joseph Bernardin, which was published in National Catholic Reporter. In writing to you, I’m following in his footsteps.

Tim, who died in 2008, started off his letter to Bernardin by urging him to eat at a local deli as the Episcopal bishop of Chicago was wont to do.

In my experience, though, Chicago is much more of a Burger King town than a deli town. For one thing, you’ll see a wide range of economic classes and a kaleidoscope of ethnicities and nationalities at Burger King. For another, there are just a lot more fast food places in Chicago and the suburbs than delis.

Some of the people you see at Burger King may be Catholic. Others, not. But that shouldn’t matter.

Coming to Chicago, you need to understand that, as the Catholic archbishop (and later as cardinal), you will be the single most visible religious leader in one of the great metropolitan regions of the world.

To be sure, when you speak, you will be speaking as a Catholic. Your words and ideas will come out of the Catholic tradition and the Catholic set of beliefs.

Still, in a real way, you will be the voice of all believers in the Chicago region.

You will have a bully pulpit from which to comment on local, national and world issues from the perspective of faith in God. You will have the opportunity to speak truth to power — to speak on behalf of ethics and morality to an American culture that, in many ways, trumpets selfishness and often denies (or at least ignores) justice.

It’s a weighty responsibility, and here’s a piece of advice: Take a page from Pope Francis’s book, and act as a servant rather than a scolder.

Your job, as I see it, is to be a pastor and a teacher, not to be a disciplinarian. We’ve had enough scolding.

I’m not saying that Chicago Catholics and all the other Chicagoans are perfect. Far from it. What I’m saying is that we need you to point out our failings, but find ways to do it with gentleness and encouragement. Like a father, not like a drill sergeant.

There has been a lot of threatening by the hierarchy over the past three decades. Many Catholic bishops have given the impression that they’d just as soon lock the church doors to anyone who doesn’t toe the line on whatever particular doctrinal issue they feel like stressing. They’ve closed their ears to debate. As if the Holy Spirit doesn’t move in all of us!

I’m not saying cave in to every interest group. I’m saying: Listen.

Listening doesn’t cost anything. It doesn’t require you to commit to anything. All you have to do is open your ears and hear the ideas and hopes and pain and joys and confusions of your people.

We will benefit since all of us feel better having been heard. You will benefit because, having listened, you won’t be acting in a vacuum.

So here’s another suggestion: Listen to everyone, but go out of your way to meet with people who feel marginalized by the church.

I’m talking about divorced Catholics and gay Catholics and Catholics married outside of the church and Catholics who have been scarred by the pedophilia scandals. (By the way, when you talk about that issue of priests preying on underage children, please don’t call it “priest misconduct.”)

No, you’re not going to be able to do much to solve their problems. The issues involved are too complex. But, by listening to them — I mean, really hearing them — you will help them to feel a little less alienated. A little less excluded.

And you’ll be able to do a better job in the future. You’ll approach questions in a more nuanced way. You’ll know the faces and the lives behind the issues.

Archbishop-elect, back in 1982, Tim Unsworth had a lot of detailed advice for Bernardin. I’m not going to do a laundry list for you.

Get around town. Get to know — it’ll take time — Chicago’s neighborhoods and suburbs, each with its own personality.

Drive your own car. Or, if you need to, hire a driver. Don’t use a priest. There is a screaming need for priests in the parishes. No member of the clergy should be reduced to being a limousine chauffeur.

As the leader of one of the largest dioceses in the nation, you’ll be tempted to act like a CEO.

Don’t. Be a pastor. Be a shepherd who cares for his flock. And cares about his flock.

I’m not exactly sure how to define it any further, but, in some way, it comes down to how you carry yourself. There’s the listening I talked of earlier, of course. But there’s something else as well, a kind of openness.

I worked for nearly 40 years as a newspaper reporter, and interviewed my share of high-ranking officials. When I was part of a small group of reporters to meet with President Jimmy Carter, I called him “Mr. President.” And, as a good Catholic from birth, I knew that, when conversing with a cardinal, you addressed the man as “Your Eminence” or, at least, “Cardinal.”

So I was surprised back in December 1990, when I had my one and only interview with Bernardin who, by that time, had become a cardinal.

It was during a period when Bernardin was having to close many parish schools for financial reasons, and I was helping with some of the coverage. After the cardinal appeared on a radio show to talk about some new development, I was waiting for him in the lobby of the station with a reporter from another newspaper.

We sat down with him for 10 or 15 minutes to ask a few questions. Nothing very memorable.

When we were done and I was walking back to the newspaper, it dawned on me. For some reason — probably it was his quiet, gentle demeanor, even when acting the bureaucrat — I hadn’t called him any of the fancy names I was supposed to use.

I had called him “Father.”

Thinking back now, I guess that’s what I mean by you being a pastor. I’d like to feel that, without thinking, I’d call you “Father.”

And here’s one final piece of advice, one that Tim also gave in 1982: Don’t live in the mansion.

Actually, Tim suggested that Bernardin sell the cardinal’s mansion in the wealthy Gold Coast neighborhood. He didn’t, and neither did his successor Cardinal Francis George. The thinking, from what I’ve been told by church leaders, is that it would have been a waste to sell the property because it wouldn’t have gotten top dollar.

That seems to be bogus logic to me, but set that question aside.

The archdiocese can keep the mansion and use it as a retreat house, or a conference center. Many parishes throughout the archdiocese have done similar things with empty convent and rectory buildings.

You can find somewhere to live in one of the city’s neighborhoods or suburbs. You could live in an apartment in a two-flat with a roommate. Or maybe in a bungalow with a small community of people — not all clerics either. Maybe a Catholic Worker house.

Look at how much mileage Pope Francis has gotten from refusing to live in the papal apartments. It’s one of the things that has made him the most beloved pope since John XXIII.

If an American politician did something like that, it would seem to be a stunt. (Actually, Chicago Mayor Jane Byrne did exactly that in 1981 when she “moved” into the Cabrini-Green project to blunt criticism of her handling of public housing. It sparked more criticism.)

If you live away from the cardinal’s mansion, you will send a message. You will be saying that you are here to serve. You are here to be one of us.

[Patrick T. Reardon, the author of Catholic and Starting Out: 5 Challenges and 5 Opportunities (ACTA), is a member of the Archdiocesan Pastoral Council in Chicago. His comments, however, are not on behalf of the Council.]