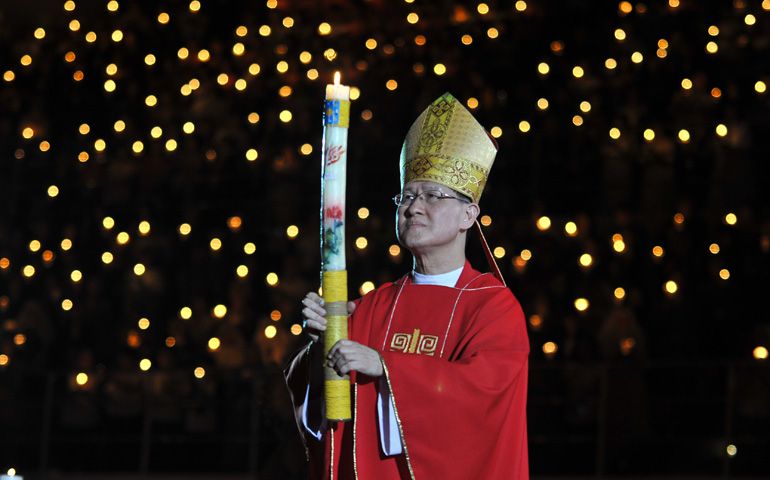 Cardinal Luis Antonio Tagle of Manila sent off more than 5,000 participants of the Philippine Conference on New Evangelization with a candle-lighting ritual and an appeal to "spread the light" of the Gospel. (Roy Lagarde)

Manila, Philippines — After months of watching Pope Francis and listening to his admonishments to take the church to the peripheries, Catholic leaders and pastoral workers in Asia turned to examining their lives and missions in a conference on the new evangelization.

A highlight of the Oct. 16-18 event was a video conference message from Pope Francis delivered during the closing Mass of the event, which capped the Manila archdiocese's celebration of the Year of Faith.

The call for new evangelization takes into consideration evolving cultures and ways of thinking influenced by new media and social networking, Tagle said of the conference theme.

Participants told NCR they were leaving the conference "on a high" and were ready to head home, where challenges of mission await them.

Pope Benedict XVI decreed the Year of Faith would run from Oct. 11, 2012, to Nov. 24, 2013, to help Catholics focus on "the new evangelization" or "a renewed conversion to the Lord Jesus and to the rediscovery of faith, so that the members of the church will be credible and joy-filled witnesses to the risen Lord, capable of leading those many people who are seeking it to the door of faith."

Tagle gave few speeches during the three-day gathering. He chose not to deliver a closing keynote address, instead inviting foreign participants onstage to interview them. He said he wanted "to give mission a face."

Occasionally he served as host, escorting guest speakers up the stage, and even sang in the Oct. 17 concert for students and guests.

He hosted a Heart to Heart sharing session among television news anchors, a Bible scholar, a youth church volunteer, a catechist and a woman with cerebral palsy, asking them about their work and their faith. He sat among the audience and listened to actors and an actress, a priest and retired Archbishop Leonardo Legaspi talk about how drug abuse, cancer, burnout and family breakup had strengthened their devotion to saints, Mary, and the Black Nazarene.

Anthony and Maria Correia from Goa, India, joined sessions with 27-year-old social worker Stephanie DSouza as preparation for a mission assignment to Malawi with Couples for Christ, a missionary community of lay Catholics under the auspices of the bishops' conferences of the Philippines and India.

"I have learned how to be a Christian, a person of joy," Anthony Correia told NCR. "Cardinal Tagle was a sermon by himself. Forget what he said. The way he conducted himself was a sermon, and if we can conduct ourselves in the same way -- just loving people, listening to them, drawing the Christ in them out -- I think that's fulfilling our mission," he said.

The Correias came to Manila with "many questions in our minds, many doubts, many fears" about going to Malawi, but the conference, Anthony said, was very reassuring, almost as if "God has specially planned for us to join this."

For Maria, "The special message of Pope Francis was also very encouraging. It really felt like he was sending us off to mission."

Participants were able to choose from hundreds of workshops stemming from main themes: the Word of God; prayer; justice, peace and integrity of creation; healing, music and arts; new media/video games; and Mary and popular devotions.

Main sessions were streamed live over the Internet and remain on the site pcne.com.ph.

In his video message, Francis thanked the conference organizers and participants and expressed the hope that they "would experience the presence of Jesus in your lives, that you would love the church more and that you would share the Gospel to other people with humility and joy."

"Don't get tired of bringing the mercy of the Father to the poor, the sick, the abandoned, the young people and the family," the pope told more than 5,000 people, including bishops, priests, religious men and women, and laypeople.

He urged them to "bring Jesus now into the world of politics, business, arts, science, technology and social media," and he called on the Holy Spirit to bring justice and peace to the Philippines and Asia, which he said is "close to my heart."

Christians make up about 4 percent of the Asia's population.

Bishop Cornelius Sim of Brunei told NCR he brought four priests and three laypeople hoping to "capture the spirit of enthusiasm of Filipinos." He said he would take home ideas on how to spearhead the new nvangelization among his small flock. (Catholics make up less than 4 percent of Brunei's population.)

Catholics in mainland China continue to practice their faith despite strained relations between the Chinese government and the Vatican, Fr. Dominic Chan, vicar general of Hong Kong, told Tagle in his mission interview.

He talked about a lecture he gave last year to 100 priests and religious, including bishops, of the church recognized by the Chinese government and technically not in union with the pope, known as the "open" church, and the "unground church," which has ties to the Vatican but is not recognized by the government.

"They want to know more about [the Second Vatican Council] and the Year of Faith," Chan said.

Cardinal John Tong-hon of Hong Kong in an email interview with NCR pointed out recent comments from "Catholics in China" about "Pope Francis' humility and call for 'A poor Church for the poor.' " Tong wrote that this "has motivated (Catholics) to reflect on the truth and love of the Church for the needy around us. The awareness to share resources for human development is essential for them to follow Jesus Christ."

He acknowledged opportunities for evangelization. Many Catholics in China are able to tour places in Hong Kong and other countries. "As a Bridge Church linking the Church in China and the universal Church, we serve as a place for support in Church work."

He said, "With more contacts and exchanges, Catholics from Hong Kong and mainland have learnt from each other in evangelization amid challenges in the fast-changing society in China."

Opportunities also exist inside China. A young priest who served as a pastor in a rural area of northern China told the cardinal he felt inadequate about his preaching skill. "But he wanted to bring people to the Lord, so he organized his Catholics with different missions," Tong said.

The priest trained his parishioners who had been baptized several years earlier to teach catechism classes. He also gave a mission to new Catholics to invite their non-Catholic friends to attend these classes.

"During their catechism classes, the priest himself was praying fervently in the church. As a result, he baptized over 1,000 converts in one year in his parish. With God's help, this priest was able to put his plans of evangelization into action," the cardinal said.

New evangelization as reaching out

Tagle told NCR that new evangelization also targets people who are lost, have separated themselves from the church, or have been hurt by the church.

Fr. Stephen Mifsud, who ran a session at conference titled "The Wounded Spirit: Healing those Hurt by the Church," considers himself among these.

One month after he became a priest of the Missionary Society of St. Paul in Malta in 2003, three members of the congregation were accused of pedophilia. They were charged in court; one has since died, and the other two are in prison.

"Imagine a few weeks after being ordained, all media was reporting about our congregation in our very small country of Malta. I couldn't go out of our monastery. I was so ashamed," Mifsud said.

He has since found help and has learned that pedophilia affects everyone in the church, but there is a way forward for dispirited members. Today, he ministers to "people hurt by the Church" through various forms of abuse and people who suffer from various addictions.

At the conference, he demonstrated a healing prayer ritual he uses.

Schönborn: The next synod must concentrate on the realities of family life