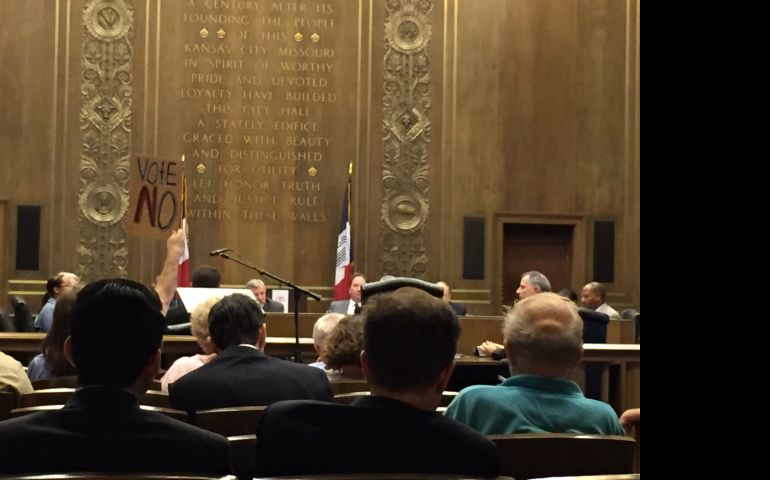 Kansas City, Mo. — Despite overwhelming opposition from the Kansas City parishioners neighboring the site, a plan for faith-based student housing was voted Wednesday to move forward to a final vote before the full city council July 23.

The proposal – originally championed by recently resigned Kansas City-St. Joseph Bishop Robert Finn – was unanimously rejected three times before the City Plan Commission, composed of appointed citizens as an advisory group, due to lack of community engagement. On July 1, the design was presented to the Planning, Zoning and Economic Development committee, a subcommittee of elected city council officials, which gave the parties two weeks to continue discussing the disputed details with councilman Ed Ford.

Ken Spare, a parishioner at St. Francis Xavier, told NCR that parishioners and neighbors were excluded from the meeting Ford held with Diocesan Chancellor Fr. Ken Riley, who testified for the project, as well as the phone conversation Ford had with Archbishop Joseph Naumann of Kansas City, Kan., who was appointed the apostolic administrator of the diocese following Finn's resignation.

Opponents of the design showed up at the Wednesday hearing with handmade signs against the project: “Vote No,” “Nonsense, Baloney!” and a large “True/False” they flipped back and forth as developers provided details to the council.

Neighbors and parishioners of St. Francis Xavier, the potential site of the contested dormitory, have argued that the plan would demand valuable parking and is inflexible as a concept should it fail as student housing. They also noted that the design does not guarantee them a parish hall — one of Finn’s four conditions for the new building.

Located on Troost Avenue and 53rd Street, the parish’s empty school building would be razed in place of the 85-unit, 237-bedroom complex. Parishioners, however, argued that the existing building can be refurbished.

That’s where they seemed to have lost the 4-1 vote in favor of the plan.

While previous hearings have ended with commissioners and councilmen acknowledging the developers’ lack of engagement and willingness to compromise with the neighbors, this time they seemed more skeptical of how open-minded the plan’s opponents were.

Arguing on behalf of the neighborhood, councilman John Sharp — the sole vote against the plan — said parishioners did not appear to be opposed to student housing, but rather the details of the plan brought forward by the developers. He also added that though the parties met 14 times to discuss the proposal, little compromise seemed to have come out of those meetings.

But committee members Jim Glover and Ford disagreed: parishioners, Ford argued, were too insistent on maintaining and refurbishing the existing school building.

When Vincent Gauthier, the parish and neighborhood’s spokesperson, testified before the council, he asked that all his neighbors who are vehemently opposed to the plan as it exists to please rise. But when about 30 people stood, Ford asked that all those who would be fine with tearing down the existing building to stay standing.

Those standing hesitated, with several trying to make clarifications regarding this detail.

“You can’t have it both ways,” Ford said, often having to use his hammer to silence the parishioners’ outrage.

“You can bang your hammer, but I’m banging my hammer,” Spare said.

“We will remember you if you vote for this,” he told the council, adamantly reminding them that they were elected to represent the community.

Though committee members Melba Curls and Scott Taylor said they support the neighborhood, they joined Ford and Glover in the 4-1 vote, agreeing the plan should move forward to the full city council for a simple majority vote.

Once again, Ford asked that developers and neighbors meet before the July 23 vote to continue discussing the project’s details.

[Soli Salgado is an NCR Bertelsen editorial intern. Her email address is ssalgado@ncronline.org.]

Protecting the homeless in freezing weather