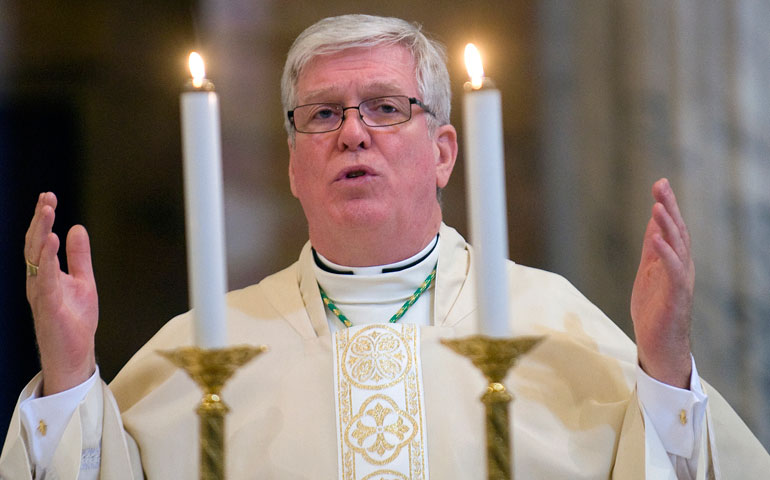 A group of 10 priests in the diocese of Venice, Fla., describing what they said had become an "intolerable" situation, took the highly unusual step earlier this year of composing a letter severely critical of their bishop, Frank Dewane, and sending it to the pope's representative in the United States.

The letter, addressed to Archbishop Carlo Maria Viganò, the papal nuncio, accuses Dewane of ignoring or violating canon law, abandoning consultative processes and ruling by "intimidation, the use of fear, shaming, bullying and other non-Christian behaviors."

The letter, dated Jan. 17, was first reported by TV station NBC2 in Fort Myers, Fla. NCR has since spoken to two of the signatories, who confirmed the authenticity of the letter and that 10 priests signed it. They spoke only on condition that their identities not be revealed, nor would they permit specific examples of Dewane's behavior to be reported, because they said those would allow the priests to be identified.

While initial reports said that the signers included some pastors as well as other priests, one of the priests and another layperson familiar with the development of the letter told NCR that all 10 signers are either pastors or administrators and together represent significant years of experience.

Dewane, in a half-hour phone interview with NCR, disputed the charges, calling them "malicious" and "unfounded." He said he had not been informed of the identity of the signers, who asked the nuncio for confidentiality. Dewane said he first heard of the complaints when the letter was reported by NBC2. He said the only correspondence he has received from the nuncio was a copy of the letter, without the names, following the initial news report about it.

The signers say they have heard nothing from the nuncio.

The letter describes a management style that the priests say has caused tension in the diocese for some time between the bishop, members of his clergy, and laypeople.

Until this most recent development, however, little has been reported because neither priests nor laypeople affected by Dewane -- whether pastors who feel he has micromanaged and bullied them or laypeople who feel they've lost their positions because of ideological or theological differences -- were willing to state any of the matters on the record, for fear of retribution.

Even with the revelation of the letter signed by 10 priests, no one is willing to speak on the record for the same fear. Some claim, too, that far more priests would have signed the letter if they hadn't feared reprisals.

How the matter is handled from here is uncertain. Dewane, who recently convened a meeting of all his priests in response to the letter, told NCR he doesn't anticipate doing anything differently. He said he invites frank critique from his priests and contends that his priests have multiple ways of letting him know through deaneries and Presbyteral Council structures what they think.

It is highly unusual for priests to complain formally about their bishop to someone higher up the hierarchical chain. The fear of reprisal is not unfounded, since diocesan priests are entirely dependent on the bishop for everything from salary to placement to pensions. Unlike priests in a religious order, for instance, every step of the career of a diocesan priest is subject to the approval of his local bishop.

That reality makes all the more extraordinary the no-holds-barred nature of the letter sent to the nuncio. The priests, after requesting confidentiality, assert that they know of "many letters of concern" to the nuncio that have preceded theirs and that they "come before you now as a united group to say our situation worsens with time and has become intolerable."

The letter outlines three major areas of the concern.

The first asserts that the Diocesan Finance Council is not being used as envisioned by church law, specifically Canon 492, and that acquisition of properties, while reported in news journals, "are kept secret from clergy and laity of the diocese." Without supplying specifics, the group also claims "many examples of excessive and apparently impulsive spending of diocesan funds."

The second point alleges the bishop "does not allow legitimate oversight" as provided in canon law and makes all decisions "independently and without the use of due diligence."

Under that point, the letter claims Dewane did away with the Diocesan Pastoral Council and that consequently "there is no group to investigate, consider, and propose practical conclusions pertinent to pastoral works in the diocese."

The group also said Dewane has abandoned the clergy personnel board and "has a presbyteral council [an advisory group of priests] in name only."

The sharpest language was reserved for the bishop's personal style. The group said Dewane "has repeatedly ruled those under his authority with intimidation, the use of fear, shaming, bullying and other non-Christian behaviors. Outbursts of rage, use of blasphemous language, despotic demands based not on reason or logic, have repeatedly scandalized clergy and laity alike. His absolute authoritarianism and mean-spirited demeanor with clergy make him impossible to work with." The group said it had lost confidence in the bishop.

Dewane, 64, a native of Green Bay, Wis., was appointed leader of the 10-county diocese in 2007. The Venice diocese comprises 59 parishes, 10 missions and a "chapel of convenience." The diocese is served by 111 diocesan priests. Religious orders oversee 14 parishes, one mission and one chapel.

In addressing the charge in the letter regarding finances, land purchases and spending, Dewane said that the finance council meets regularly and that any purchases of property it approves are made public. He said suggestions for purchases of property for parishes begin with the Presbyteral Council, with priests who become aware of development and expansion in different areas of the diocese. Dewane, who said the finance council is made up of members suggested by pastors, said other diocesan agencies and officials are also consulted before any land is purchased.

In response to the letter to the nuncio, Ernie Skinner, chair of the finance council, wrote a letter that was used as a guest column in the diocesan newspaper in which he termed the allegations "untrue and non-factual." He said that "prudent expense management" has resulted in expense levels that are within budget, "hardly an indication of 'excessive and impulsive spending.' " Skinner also wrote that every real estate transaction "is presented and disclosed with the corresponding justification."

Dewane said he did not "dismiss" the Diocesan Pastoral Council but that it "ceased" when the previous bishop retired. He said he "looked for a broader way to do the pastoral consultation" and that he found the Pastoral Council too narrow in its concerns.

"To me, every time I go into a parish, and that's often for me, I'm out and about in the diocese. Maybe a lot of bishops say that. My priests will sometimes say he's around too much. But I am out and about," Dewane said. "That's where I hear what's going on and what's needed and what the feelings of the people are at the parish level."

While he emphasized several times that he had never heard the complaints listed in the letter, he also said it "is kind of ironic that in the letter I'm accused of ignoring canon law because the accusation earlier was, 'He just goes by the book. Whatever the law says, he does.' "

In fact, he said, the diocese operates with a range of commissions -- from liturgy to planning and development, to the Presbyteral Council, Finance Council and Review Board, many called for or recommended in the Code of Canon Law.

His belief in the value of the Presbyteral Council, he said, was illustrated by the fact that at one point last year, when he was having severe hip problems and was not coming into the office, he made his way to a Presbyteral Council meeting. "It means that much to me," he said. "That's where I hear from my priests about what's going on or maybe what isn't going on that they want."

Dewane said the portion of the letter that "really hurt" was when the priests said that "I'm not doing what Pope Francis wants and so on and so forth. I think I've listened to what this Holy Father had to say, and I've grown in that time. The Holy Father uses a phrase -- I grew up on a farm and this really resonates with me when he says, the shepherd must smell as his sheep do. It's partly my reason for going out and being out and about in the diocese, being in the parishes, going into the schools, which I do two to three times a year to every school I have. Because that's how I believe I get a pulse of who they are, what their concerns are."

Asked if, in private moments, he ponders why some of his priests have reached such a passionate opposition to him, he said:

"You know, I think I can say in reflecting back, I probably said the same thing to myself when I first saw it. What happened here? Why haven't I heard these?

"I think the whole emotional vocabulary that's used there, loaded words, I don't know who they're describing. You know, do I look at myself? Well I have to because it says I'm that and I have to accept that. Do I look the other way and where it came from? What motivated this kind of thing? Who could it be, but not for a name? Just in a general sense, and why?"

He said, "The support I received from individual priests since this letter came out has been humbling for me. Humbling in the sense that men who have stepped forward say, 'Bishop I know this is tough time for you and so forth, but I just want to tell you ...' And then they fill it in. One just today, I got a statue of the Good Shepherd, and he puts a note and says, 'You are the good shepherd.'

"And that has been very, I'll say it, humbling. And a tad emotional for me. That support and encouragement."

Asked how he would deal with a split clergy, he became quite animated in disputing the description.

"I'm going to take issue. I'm going to say it's not a split," he said. "That word I really can't go along with. There is a group who signed the letter, that's absolutely clear. ... I'm just going to say I don't see it as a split. I see we need to encourage some individuals, and that goes along with myself, to be more attentive to things. But I don't see it as a split. I think that's not fair. If there were far more signatures, maybe we'd have this conversation differently."

He said he plans to continue meeting with priests in the regular forums already provided.

The nuncio's office in Washington did not have an immediate response when asked if there were procedures for handling such complaints.

A version of this story appeared in the June 20-July 3, 2014 print issue under the headline: Priests' letter to nuncio denounces bishop.