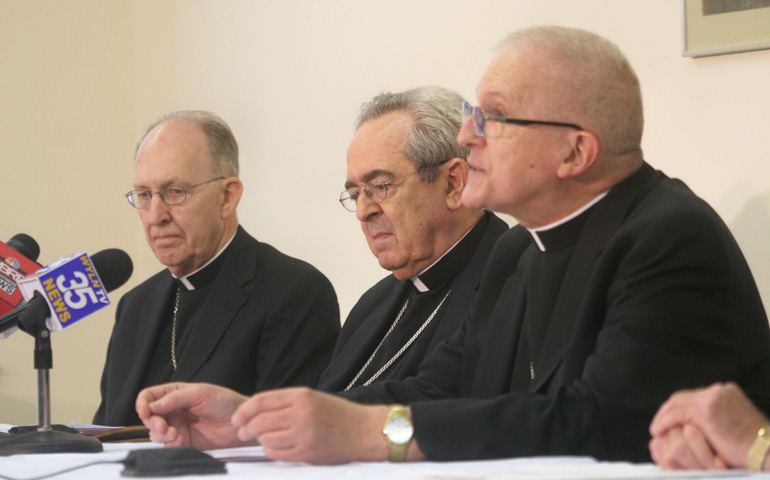 At the press conference Aug. 31 announcing the resignation of Joseph Martino as bishop of Scranton, Pa., Philadelphia Cardinal Justin Rigali said, Martino's resignation "comes after much prayer and reflection," and the decision "also carries with it a deep concern for the well-being of this local church, with its clergy, religious and laity."

Given Martino's stormy tenure in Scranton, words like "deep concern for ... this local church" have led some to wonder how voluntary the resignation was.

The God in Government blog of The Washington Post reminded readers that Martino "made a rather spectacular appearance at a parish forum last year where members were discussing the U.S. Conference of Catholic Bishops' document on political responsibility. He ordered the discussion closed, telling the group, 'No USCCB document is relevant in this diocese. The USCCB doesn't speak for me.' "

Noted religion journalist David Gibson wrote yesterday that "church insiders say Martino had also worn out his welcome with his brother bishops and the Vatican."

"So his resignation may be further evidence that the U.S. hierarchy is divided between moderate voices and a more strident conservative minority that is struggling in the wake of Obama's success with Catholic voters. "

At 63, Martino resigned well before the Vatican's mandatory retirement age of 75. A statement from the U.S. Conference of Catholic Bishops said Martino was retiring for “health reasons.”

The bishop said he is "certainly not prostrate with illness," but the stress of running the diocese had led to insomnia and “crippling physical fatigue.”

Asked if he was surprised at the resignation, Rigali said, "Surprise I don't think is the word. I was happy to know that the bishop had done what he thought he should do and that I knew he would do it with a great deal of conscience and that it would work out for him and the church."

Martino then added: "About a year ago, I mentioned in passing to the cardinal that there were times when I thought perhaps that the best thing I could do for the diocese would be to move on. ... Things roll along and you begin realize that a small thought is a very good thought that needs to be implemented."

It was, of course, a year ago that Martino burst into the national scene. During the 2008 presidential campaign, he frequently criticized Catholics -- including fellow bishops -- who suggested that abortion was only one of many issues by which to assess candidates.

Shortly after the election last November, Martino stood on the floor of the bishops' meeting in Baltimore and pledged to withhold communion from Biden, who was raised in Scranton, because he supports abortion rights.

Martino later issued similar threats to Sen. Robert Casey, D-Pa., after he voted to confirm Kathleen Sebelius, who supports abortion rights, to head the Department of Health and Human Services.

Martino also warned Scranton politicians that he would close the diocese's cathedral on St. Patrick's Day if they honored any politicians who support abortion rights; he tried to shut down a local Catholic college's diversity program after it hosted a gay rights advocate; and he refused to recognize a local Catholic teachers union. He also presided over mass consolidations of schools and parishes, many of which have been contentious.

At the news conference yesterday, Martino asked forgiveness from "anyone I have not adequately served as bishop."

Asked what he thought his legacy would be he recalled his homily at his installation mass in which he echoed the call of Pope John Paul II: "I called the diocese to reach out to the deep … for the church and church members not to be afraid, but to go out into the deep and take courageous steps to bring the kingdom of god into fuller fruitarian, to give the church greater life."

That challenge, he said was expressed in slogan, "Called to Holiness and Mission," which was also the title of the pastoral planning process he implemented that led to the scheduled closing of more than 100 parishes and schools in the diocese between 2007 and 2012.

"Unfortunately that term" -- Called to Holiness and Mission -- "has become almost completely identified with the closing and opening of parishes, but there is more to it than that. That is only a means to an end."

The end, he said, was to achieve greater holiness, to look outward, "to look to others and give them love and service."

"With institutional changes in the diocese, our schools, our parishes, I think we will be a little leaner and a little more able, as all people are when they are leaner, to have more energy and do the work of God more efficiently and effectively. I hope that is my legacy.

Asked about regrets, he said he only wished he had more energy and stamina. "I've often been amazed at my brother bishops who have remarkable physical energy," he said.

[Contributing to this report were Catholic News Service, Daniel Burke of Religion News Service and Dennis Coday of NCR.]