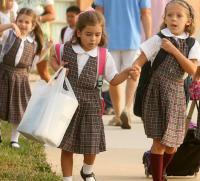 Catholic schools in the United States are disappearing. Not entirely, of course, and no one is yet declaring them an endangered species. But the same demographic and financial forces largely behind the closing and mergers of hundreds of parishes during the past half century are the same forces driving the steady shrinking of the country's Catholic school system, a downsizing that has accelerated in some areas in recent months.

"It is worrisome and it's fragile," Dr. Karen Ristau, president of the National Catholic Educational Association, said of the Catholic education system. "But I think it is absolutely worth saving. We're seeing now very sincere efforts to do that."

Those efforts include increased cooperation among schools; mergers of boards of education in some places to effect efficiencies in everything from operations to purchasing; investigating new models other than schools run by a single parish; reaching out beyond the Catholic community to seek investment in an asset viewed as valuable to the larger civic community; programs encouraging Catholic school alums to partner with schools or "adopt a student," a strategy that involves paying a child's tuition; and attempts to transform Catholic schools into charter schools.

Just as the world of Catholic education seemed to be not only identifying some of its major problems but "getting a grip on them and a movement in a good direction, the economy saw the big downturn and that has intensified everything," said Ristau, who took the reins of the organization in July 2005. "Finances are now the top concern everywhere."

Well before the financial downturn, however, it was clear that Catholic schools were in trouble.

The system -- which actually is, as Ristau says, "a system that's not a system" because the way schools are run can vary greatly from one location to another -- has been on financial thin ice since the drop in the number of priests and nuns that began in the 1960s. The nuns and priests who staffed the schools 60 years ago came at a small fraction of the cost of lay teachers who had to be hired to fill the vacancies. More recently, the financial problems were exacerbated by payouts to settle clergy sex abuse claims since the mid-1980s.

Those payouts, said Ristau, "have seriously affected the resources available in many dioceses." Catholic education has been most noticeably hurt in some areas of the country by cutbacks in personnel and services, and deep cuts in such areas as professional development and travel, she said.

In addition to population shifts and financial problems, another demographic fact has cut into enrollment: Like the rest of the culture, Catholic families in recent decades are no longer having as many children as were families when attendance was at its peak.

According to the Center for Applied Research in the Apostolate (CARA) at Georgetown University in Washington, the total number of Catholic elementary and high schools in the country has declined from 12,893 in 1960 to 7,378 today, according to figures published in its fall 2008 newsletter.

Since those figures were published last fall, more closings were announced, most notably plans by the Brooklyn, N.Y., diocese to shutter 14 of its elementary schools next year. According to a report in the City Journal, the boroughs of Brooklyn and Queens "now have 40 percent fewer Catholic schools than they did when Mayor Michael Bloomberg took office in 2002."

There is a certain inevitability to the downsizing, as is the case with parishes. Former immigrant Catholic populations who built the parishes and schools and populated them with children from large families have moved on to the suburbs and exurbs and whatever other names are given to the ever-expanding rings of development around cities.

While the priest shortage is also blamed for a lack of growth in the number of parishes, even where there are new concentrations of Catholics, Ristau gave different reasons for the reluctance to build new schools. Bishops no longer have the same interest or insistence on building Catholic schools, she said. Laypeople also took on the attitude of "We got out of the Catholic ghetto so now we're going to be like everyone else and go to public schools."

Finally, she said, "the big church, all of us, worked under the assumption that Catholic schools would always be there," an assumption that is quickly showing itself to be false.

From her vantage point at the National Catholic Educational Association, Risteau sees not only the problems but also the promise, and one of her intents is to make people aware of what works. "The best thing that NCEA does is link people up with each other. I feel like a reference librarian most of the time," said the former teacher, high school principal and college administrator. At the association's upcoming convention, she's instituted a "Smart Moves Café," a place where people can come together and are invited to share ideas and programs that are working to reduce costs and save schools.

Gloomy news aside, success stories exist. Chicago, which closed 19 schools in 2005 and 2006, hasn't closed any since and even saw a Cristo Rey high school, Christ the King, open in 2008. However, three more schools will close at the end of this year, according to Ryan Blackburn, director of marketing and communications for Chicago Catholic schools. The archdiocese is exploring future uses ranging from education or evangelization centers to early childhood programs.

Despite the closings, Chicago still maintains a robust school system, thanks in no small measure to the Big Shoulders program started by the late Cardinal Joseph Bernardin. The program now contributes about $12 million annually, largely from successful Catholic school alums committed to seeing that schools in the inner city remain open. "They've made a commitment to insuring the schools that they support [93 in all] do not close," said Blackburn. Their support is combined with support from the parishes where the schools are located and with that of the archdiocese.

Looking to the future, though, Blackburn sees three critical areas that need attention: finance, governance and leadership. And here he echoes the concerns of Ristau and other Catholic school administrators.

In the area of finance, he said, the archdiocese has begun to approach business and other sectors of the larger civic community to establish capital campaigns, building funds and major gifts campaigns. "We need to seriously begin addressing the affordability piece. The cost for educating children in Catholic schools is borne to a very high degree by parents." And steadily increasing costs have resulted in smaller enrollments.

The archdiocese is also investigating new governance models that would move away from the one-parish-one-school format of the past to a more regional concept in places where parishes are struggling to maintain schools.

He said that even during this time of economic downturn, the archdiocese, led by Cardinal Francis George, has maintained a commitment to professional development for educators and administrators to provide continuing leadership. "That's a tremendous emphasis of ours, building a pipeline for the future of Catholic educators and administrators who are capable of carrying this mission forward," said Blackburn. "You've got to have great people."

Tom Roberts is NCR editor at large. His e-mail address is troberts@ncronline.org.

At Holy Trinity Parish in Ocala, Fla., the Catholic elementary school is filled to capacity, there's a waiting list for most grades and parishioners don't have to pay tuition.

There's no magic formula, no deep-pockets benefactor, and education isn't free. The cost is met through a parish stewardship program, which involves a donation of time, talent and treasure. It is easy to view the arrangement as a simple matter of economics: pay the tithe (a 10th of income before taxes) and school is free.

But Fr. Patrick J. Sheedy, pastor for the past 20 years, insists that stewardship is first a spiritual matter. He took his model from the Wichita, Kan., diocese, which may still be the only spot in the country where a stewardship program has provided tuition-free education for the entire diocese (NCR, March 26, 2004).

"I'm convinced about the spirituality of it," said Sheedy in a recent interview. "It follows so easily from the Gospel." So the first 10th goes to God, under the plan. Eight percent of that amount goes directly to the parish. The other 2 percent can be designated by the parishioner for a charity, and that charity doesn't have to be a Catholic one, said Sheedy. If parents decide to participate in the stewardship program, they must produce income verification documents. "You're making a commitment to God," said Sheedy. "You recognize God as the source of your blessings and you decide up front" that God receives the first donation of time, talent and treasure.

About a third of the parish has decided to go the stewardship route, which also requires a commitment to attend Mass regularly and to be involved in parish ministries.

Of that third of the parish, said Sheedy, about half have children attending schools. Parishioners who don't participate in the stewardship approach and want their children to attend Catholic school are required to pay full tuition.

The stewardship program also covers the costs of such ministries as summer camp and Bible camp.

But the pastor returns to his conviction about the spirituality of the approach. "I really don't worry about money. I worry more about making sure we have the spirituality down right. If we fold, we fold. But we're not right now; we're still paying the bills."

Should we care about what happens to displaced parish communities?