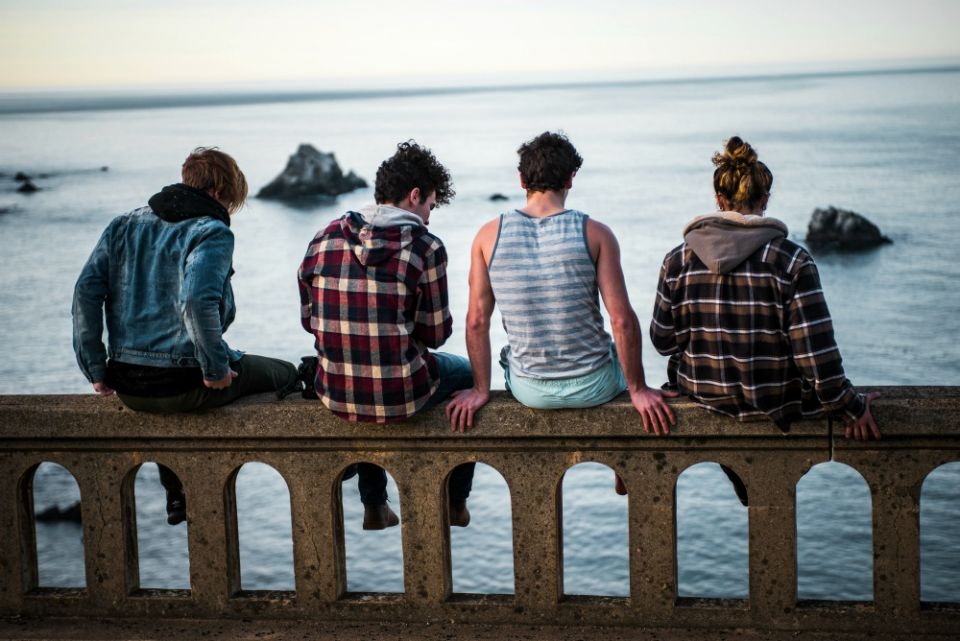 Young people — including those who are religious — do not see religious leaders as trusted adults, according to a new study. Only 8% of respondents ages 13-25 who are affiliated with a religious group say they have a trusted religious leader they could turn to if needed.

In contrast, 45% said they could turn to a close adult friend, 35% to a grandparent, and 17% to a teacher, according to the study by Springtide Research Institute.

Informed by more than 150 interviews with study participants, the study's report released Oct. 20, titled "The State of Religion and Young People," proposes a new model for youth ministers to build personal connections, encouraging them to practice listening, transparency, integrity, care and expertise, the five dimensions of what it calls "relational authority."

Data from the 10,516 surveys conducted for the study also indicates that young people who have more adult mentors are more likely to feel a sense of meaning and purpose, and less likely to be lonely. The study argues that close, trusting mentor-mentee relationships are key to mitigating isolation among youths and having lasting influence in their lives.

Young people are experiencing record loneliness w/ low levels of trust in most traditional institutions. As they seek meaning, navigate questions of identity, & pursue community, how can you be a trusted adult who listens to, cares for, & guides them? #religionandyoungpeople2020 pic.twitter.com/UyI8bYrWNz

One respondent, Felicia, 19, said in her interview, "When I think of belonging, I think of being cared for and having someone show any type of genuine interest in how my life is going."

"We want to help those who care about young people to care better, and that requires a really clear understanding of the issues and challenges that young people are facing," said Josh Packard, the executive director of Springtide, which grew out of the team from St. Mary's Press that created 2018's "Going, Going Gone" survey on young Catholics leaving the church.

Michael Bayer, a former member of the U.S. Conference of Catholic Bishops' National Advisory Team on Young Adult Ministry, told NCR he believes the church will only succeed in engaging more young people if parishes hire trained youth ministers who can train laypeople in the art of accompaniment, laid out in Pope Francis's encyclical Christus Vivit, the post-synodal document after the 2018 synod on young people. 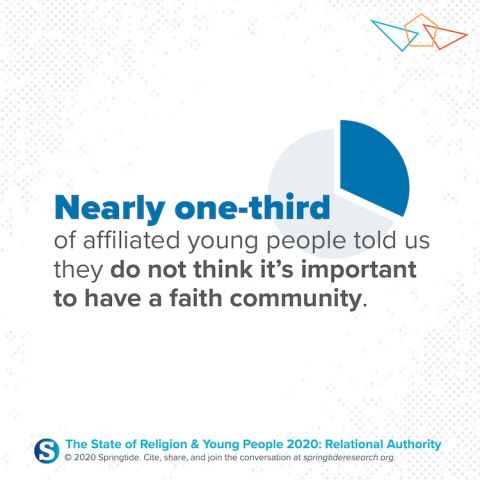 "All the best practitioners I know are huge proponents of relational ministry and not programmatic ministry," he said. "The challenge is that the majority of Catholic parishes and dioceses in the United States are not well-equipped to train people for relational ministry."

This is partly because Catholic ecclesiology emphasizes the sacraments above all else, he said, which can mean practically that parishes and dioceses with limited resources pour money into sacramental celebrations and ensuring that priests are available, instead of investing "financially, materially and temporally" in training people to do long-term relational ministry.

"It's really easy to pack a group of high schoolers up on a bus and take them to a one-day rally; it's really hard to train the adults and young adults of your parish to provide ongoing, one-on-one and small group mentorship and accompaniment over the course of their high school years," Bayer said.

Parishes or dioceses that have hired professionals who can train laypeople in relational ministry have been successful, Bayer said, citing Patrick Rivera's work as director of young adult ministries in the San Diego Diocese, which has one of the highest percentages of parishes with active young adult groups.

"Bishop [Robert] McElroy invested in full-time professional staff who could go out and could train young adults to do this, and you see the results," he said.

Rivera echoed the importance of relational ministry: "We are tremendously invested in the person over the program," he told NCR.

"The events are the way we cast the net," he said, but the primary approach of the diocese's young adult leaders (who number about 40 paid employees between 99 parishes) is to get to know people and make themselves "radically available."

But with trust in institutions having declined across the board over the past several decades, young people today often meet clergy and other religious leaders with skepticism, Packard said at an Oct. 20 Facebook Live event. Packard, a professor of sociology at the University of Northern Colorado, shared that a pastor told him in the course of his research several years ago: "When I lead with the fact that I'm a pastor, I set myself up for an uphill climb, with young people especially." 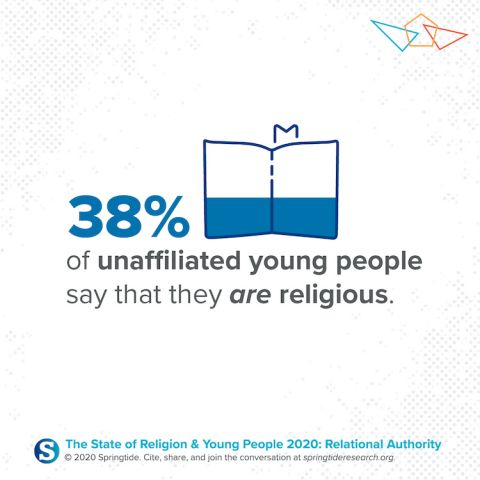 The new study's data reflects broad distrust of religious institutions among youths, regardless of whether or not they belong to religious groups.

The report also reveals high rates of loneliness and isolation: 69% of respondents said they have three or fewer meaningful interactions each day, 39% reported a sense of isolation from others, and 34% said they feel completely alone.

Packard argued that youth ministers must demonstrate personal care to break through this loneliness. "You may be really worried about young people's souls, and that's an admirable and good thing, but young people are really, really concerned about their levels of loneliness, and if you can't address that first, you'll never get to do the soul care work or transformation work that you really want to do," he said. 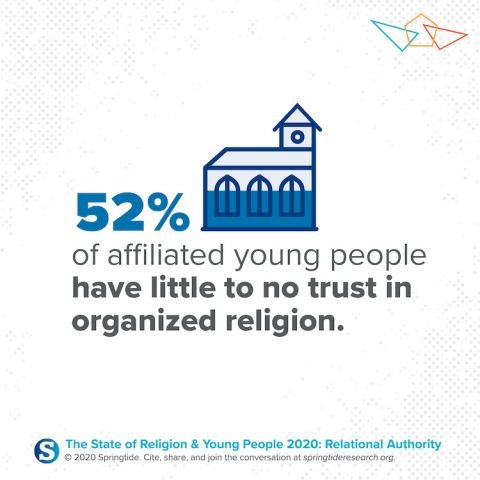 But she made the distinction that it is not her role to be a teen's friend. Some new youth ministers struggle to draw that boundary, she said. "I think the fear that's coming out is to make sure that it's not coming across as inappropriate in any ways."

In her new position at Our Lady of Fatima Parish in Lakewood, Colorado, Murillo hopes she can help to rebuild trust in the church by being consistent and supportive in her ministry. Like Rivera, she emphasized the importance of youth ministers' availability. "My vocation is to young people, so when a young person wants to talk, I'm available," she said.

Murillo says she has always prioritized genuine one-on-one care in her ministry. In her previous role at Christ the King Cathedral in Lubbock, Texas, she once found a student sitting in the hallway of the cathedral high school and crying. The student had never attended youth group, but Murillo had met her at school events, so she was able to call her by name and comfort her.

"I didn't sit there and say, 'Why are you crying — don't you know Jesus loves you?' " Murillo recalled. "If [teenagers] are not OK, then their relationship with Jesus is not OK," she said. "We have to be about the people." 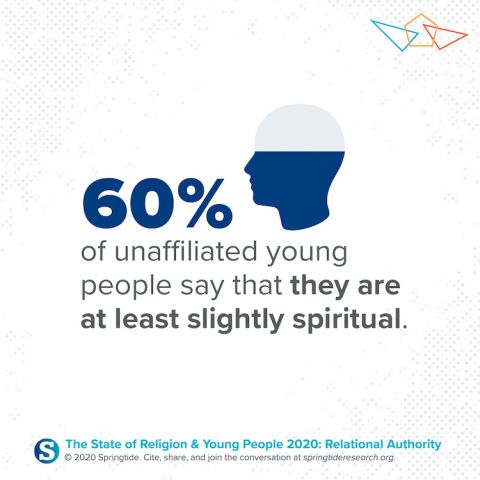 Though speaking with teens about faith and the catechism is an important part of her work, Murillo believes she must convey the love and care of Jesus through accompaniment first. On the road to Emmaus, "Jesus asked these guys if he could join them, he asked them what they were talking about, he listened to them, and the fourth thing he did was talk to them," she said.

Ultimately, Packard says he hopes that practicing relational authority will enable youth ministers to create a whole culture of belonging in which young Catholics — and all Catholics — will model the inclusion and care they experience in their youth groups and parishes.

Bayer shares this sentiment: Initially, many adult Catholics will think they are not qualified to be leaders or mentors for young adults, "but Jesus chose fishermen," he said. "By discipling them, he trained them to do it for others, and that's the model."

A version of this story appeared in the Nov 13-26, 2020 print issue under the headline: Study: Youths connect to faith through relationship .

Editorial: 'Knock, knock. Who's there? More than half the church!'