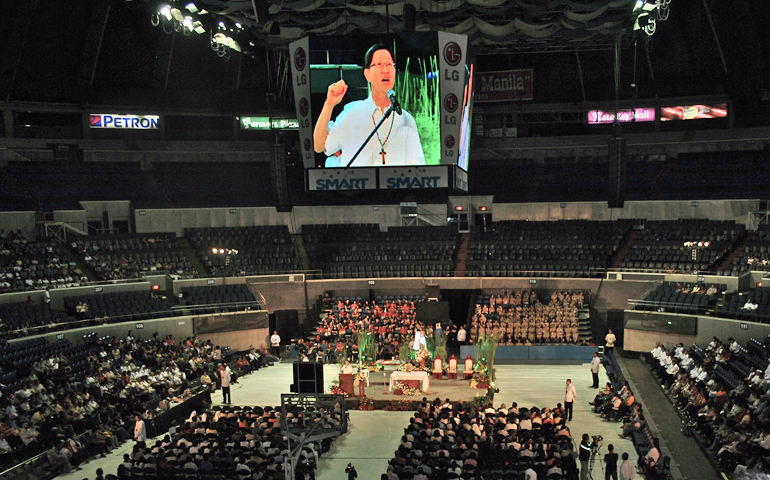 Cardinal Luis Antonio Tagle on his first Easter recollection as archbishop of Manila urged thousands of Catholics at the Smart Araneta Coliseum and many others listening on the radio Sunday to go out and serve in mission.

"We want to continue the dynamism of Easter," Tagle said, echoing Gospel verses in which Christ urged the first disciples to "go to the ends of the earth" and to "go to the nations" and bear witness to Christ.

This year's recollection was originally scheduled for March 10 but was pushed to Sunday because of the March 12-13 conclave that elected Pope Francis. Tagle said the conclave created a chance to organize a recollection during the Easter season instead of during Lent, the common time for retreats.

Tagle said the conclave's timing was providential because the new pope has talked about mission as the "key to ministry" and that "a Church that does not go out of itself, sooner or later, sickens from the stale air of closed rooms."

Shifting periodically to Tagalog, Tagle said the many retreats during Lent in the Philippines tend to draw more attention to Christ's invitation "to an interior journey" to work through frustrations, hurts, fears and find renewal. He called these experiences "Galilees in our lives." Lenten retreats rarely explore enough the drive for Christians to go out and witness to Jesus, he said.

More than 80 percent of the Philippines' estimated 92.3 million people are Catholic. At least 9,000 of them came to the coliseum for the recollection and Mass with their family, friends, co-workers and fellow parishioners.

Tagle appealed to people with relatives or friends preparing to go abroad for work to get in touch with their parish priest or the diocesan ministry for migrants' office in their parish, which prepare outgoing parishioners to be missioners in the countries they will be going to.

"In many parts of the world, in Europe, in North America and in South Asian countries, Filipino workers are the people who are keeping churches alive," Tagle said, drawing applause from the congregation. "If not for the Filipino workers, it might be that the churches would just be closed down."

An estimated 2.2 million Filipinos worked abroad between April 2011 and September 2011, according to the 2011 survey of the National Statistics Office, though the church and nongovernmental organizations estimate the figure to be higher, including undocumented migrant workers.

In Brunei, most of the 20,000 Christians are Filipinos, Tagle said. There are Filipino nannies, cooks and household workers in Italy who have restored religiosity to Italian homes by teaching children to pray and by bringing their employers to Mass, he said. He also compared the local situation to that of a parish in Cambodia he visited that had only 20 parishioners, "the size of a prayer group here."

"The world is so vast; we need witnesses to Christ, but (also) make sure we are witnesses," Tagle said.

To testify to Jesus, Christians need to know Jesus more through Scripture, the Eucharist and sacraments, he said.

"The Easter mandate is at the same time a mandate to get to know Jesus, to deepen our relationship with him," Tagle said. "Part of mission is discipleship. I can be sent only if I'm a good friend of Jesus. For if I am sent without that premise, I have nothing to talk about except empty words and beautiful formulae."

He defined "witness" as "a believer" who "shares from the exuberance of one's loving encounter with the Lord."

He added that nurturing the faith requires "constant listening to the Holy Spirit ... to remind us of everything that Jesus had told us." It is Jesus' word, his love and justice that witnesses testify to and not one's own truths, Tagle said.

Forgiveness of sins in Jesus and calling people to repentance and conversion is the missionary mandate of the risen Christ, Tagle said.

He invited people to reflect on where the Lord is sending them: "maybe to your family, maybe to your neighbor, maybe to someone distant from the church or maybe, just maybe, to another land."

This impressed catechist Mirasol Bautista of Balara, Quezon City. She told NCR she felt challenged to be patient, loving and "like Christ" to the hundreds of students she is teaching.

Second-grade religion teacher Aljon Carpio, 22, said he came to the recollection with colleagues at Notre Dame of Greater Manila school and his friends to hear Tagle preach in person for the first time.

Carpio had not heard of Tagle until news reports emerged in February, naming him among possible candidates who could be the next pope. Carpio said he was going home "inspired and amused with the storytelling" and said he planned to look into the option of entering the seminary, which he had set aside in favor of teaching.

[N.J. Viehland, a freelance journalist, writes for NCR from Manila, the Philippines.]