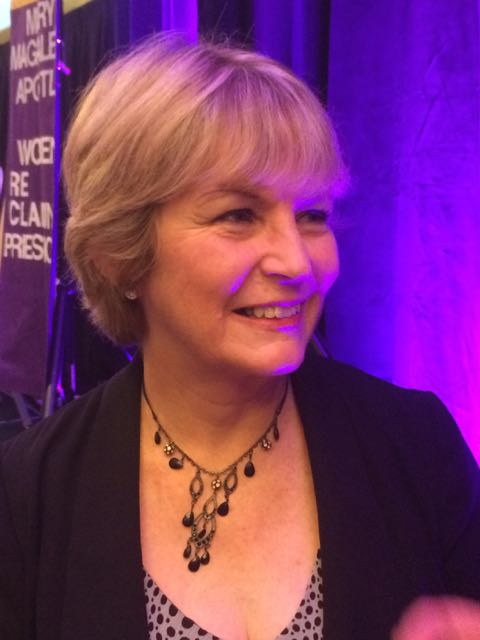 Speaking at the Women’s Ordination Worldwide conference Saturday, British theologian Tina Beattie said sharp traditional distinctions between male and female that formed traditional Catholic theology over centuries have dissolved in recent times challenging church teachings, including those on the priesthood.

As patterns of new thought on gender took greater hold, beginning in the 1990s, the Vatican reacted with fierce opposition, first publicly visible at the U.N. Conference on Population and Development in Cairo, Egypt, said Beattie.

Professor of Catholic studies at the University of Roehampton in London, Beattie said it was at that international event the Vatican found itself in opposition to many calling for greater rights for women and children.

In the early 1990s, the language of sexuality and sexual rights began to feature in international debates about human rights, prompted largely by the influence of feminist and gay lobbies, Beattie said. “The Cairo conference was the first major battle in an increasingly hostile war.”

The Vatican, she said, continued to oppose those who would use the U.N. “to promote a sexual rights agenda, to sanction abortion or homosexuality, or to undermine marriage and the sexual complementarity of male and female.”

Meanwhile, she said many other theologians in recent years have been exploring new perspectives “that open up when we become aware of how theology has been influenced by the invisible lenses of gender, and when we seek different possibilities for the interpretation of gendered Christian doctrines and their anthropological, sacramental, and ethical applications by making those lenses visible.”

Beattie focused on Pope John Paul II’s 1988 apostolic letter, Mulieris Dignitatem, in which the pope sought to explain reasons for the exclusive masculinity of the priesthood.  “Mulieris Dignitatem goes to considerable lengths to affirm the full equality and dignity of ‘woman’ in the order of creation and redemption,” she said. “Although his vision of womanhood was highly romanticized and essentialized, John Paul II had a keen awareness of the extent to which women have been victims of injustice, violence and oppression.”

The theologian, however, said that for years she has struggled with “an inconsistency in the language of gender in Mulieris Dignitatem,” saying it is used :analogically in some places and literally in others, with no attempt to explain why this is so. In other words, it begins to look rather like gender ideology.”

She highlighted the inconsistent gender-related references in official Catholic documents, saying, “I think I’ve lost track of the number of genders we have now. There are the genders associated with sexed male and female bodies in a rather literal reading of Genesis, but in the mystery of Christ and the church, these become prismatic and open to several different configurations. Men can be brides, but women can never be bridegrooms except with regard to the ways in which humans love. There is neither masculinity nor femininity in God, and divine generativity is not to be identified with human sexual procreation, but nevertheless as bridegroom Christ is masculine and  that, which is feminine, can never occupy the position of the masculine. Femininity embraces a complex array of gendered identities, referring to female bodies as virgins, mothers and brides, but also to male bodies. It refers collectively to humankind, and to the church. But masculinity refers exclusively and only to the male body which represents the Bridegroom, Christ.”

She went on: “If there is neither male nor female, and if Christ and the church are, in the words of Ephesians, ‘one flesh’, could we not say that male and female bodies together manifest the risen body of Christ as the fullness of the human redeemed in the flesh of Christ?"

She traced Catholic theological dualism on sexuality to the emergence of Aristotelianism in the medieval universities “in which the copulative relationship between paternal form and maternal matter is the basic building block of creation.”

“Inseminating forms acts upon receptive matter in order to bring the world of differentiated bodies into being. This gendered account of the nature of being encompasses all that is, and it has profoundly shaped the western understanding of gender.”

Said the theologian: “Starting with the authors of Genesis, men have for millennia tried to account for their existence in ways that avoid recognizing that they arrived in the world from the fleshy womb of a woman’s body by way of a woman’s vagina.”

She asked how much “this anachronistic but still potent belief” is deeply rooted in the church’s understanding of consecration and transubstantiation.

“Matter cannot act upon matter. Only form can act upon matter. Only form can initiate a process through which a material body is transformed in its essence, while still appearing in its former guise. In other words, only the man who represents form can transform the materiality of bread and wine into the body and blood of Christ. We might argue that female bodies are also integrated dualities of form and matter, or we might argue that the whole opening up of modern physics and quantum theory shows us that this account of the nature of being is no longer valid, but the superstition persists long after the science has exposed its errors.”

Beattie said her research has focused on the difference gender makes to the symbolic significance of blood.

“Are these dualisms not subtly but profoundly inscribed in the sacramental priesthood, with its insistence upon the significance of the phallus for the valid performance of the liturgy?” Beattie asked. “Is the Mass still in some ancient but also postmodern way being interpreted as a fertility rite representing divine phallic insemination of a receptive and formless materiality?”

She asked out loud if men and women might experience the Mass differently.

Gender theory, said Beattie, dissolves the moral certainties and sexual binaries and ushers in a new and as yet unknowable future. “It invites renewed reflection on what it means to say with St. Paul that, ‘There is neither Jew nor Gentile, neither slave nor free, nor is there male and female, for you are all one in Christ Jesus.’ ”

She concluded her talk contrasting statements Pope Francis has made.

In the apostolic letter, Evangelii Gaudium, Francis wrote: “The church is called to be the house of the Father, with doors always wide open. One concrete sign of such openness is that our church doors should always be open, so that if someone, moved by the Spirit, comes there looking for God, he or she will not find a closed door.”

By contrast, he said, with regards to the ordination of women, “The church has spoken and says no. ... That door is closed.”

Ambiguity regarding Vatican references to women, Beattie concluded, have yet to go away.

[Thomas C. Fox is NCR Publisher and director of Global Sisters Report. He can be found on Twitter @NCRTomFox and can be reached at tfox@ncronline.org.]