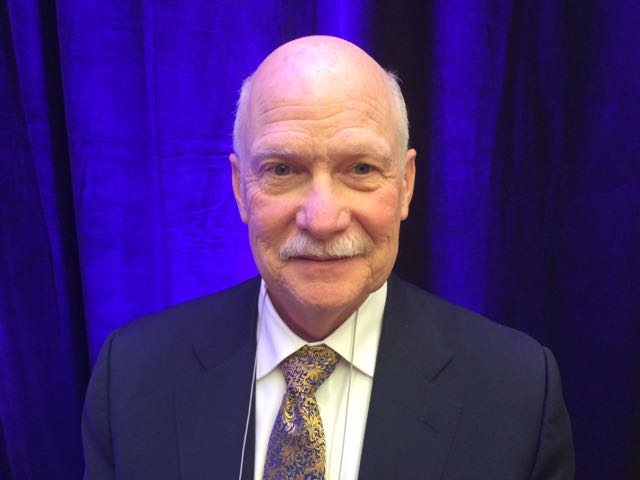 When Gary Macy stepped behind the podium at the WOW conference here Saturday he asked why it was there are so few references to women priests in centuries long gone by.

Then he answered his own question, saying, “quite frankly, priests just were not that important for the first millennium of Christianity.”

With that he appeared to have his audience’s full attention, all 500 who had assembled in the downtown Marriott hotel ballroom.

Macy is professor of theology and chair of the religious studies department at Santa Clara University, and author of The Hidden History of the Ordination of Women: Female Clergy in the Medieval West.

Macy said that during the first millennium, at least, ordination to the priesthood did not automatically mean someone led the liturgy or presided at other rituals. Priests and others, ordinary people, he said, could celebrate rituals, including the Eucharist, and including hearing confessions.

It was a much more egalitarian and classless Christian community for the church's first 1100 years,  Macy said.

Macy, making the point church structure, as we know it today, with its distinctive and separate roles, has not been a timeless matter. Rather, he said, structures and roles have changed over time. To help make the point Macy offered several observations:

The nature of ordination evolved as well.

“In the past, ordination referred to the selection and installment of a person by their own community to a position, or office, or function really, within that community,” Macy said. “Ordinatio originally described not only the election and consecration to a particular liturgical function, but rather to any function considered of service to the Christian community."

The Santa Clara professor continued, pressing the notion of how the meaning of the word "ordination," itself, has changed over centuries. An ordo, he said, would be a role within the community. This would include not only roles that are now considered spiritual, but also other roles, in political and civil society.

During the first 1,000 years of Christianity, at least, according to Macy, to be ordained meant to be selected and appointed by a community to serve a specific function in that community.

He cited the late theologian, Yves Congar, who pointed out that ordination is also a term used for the appointment to an ecclesiastical post by a secular ruler.

“Ordo clearly did not necessarily refer to a particular clerical state,” Macy said.

Macy elaborated, saying that ordination in the early centuries of Christian life referred essentially to a function, a role within Christian community -- “and not to the conferral of an irreversible power irrespective of the attachment to any community.”

Furthermore, Macy said, in the first millennium of Christianity an ordained person was expected to be from the community that chose her or him and that person remained bound to that community.

The tie, he said, between bishop and his community was stronger than that of other clerics. Part of the consecration of a bishop involved his selection and election by the people of his community.

“This connection was so strong that the Second Lateran Council decreed that an election of a bishop must be made by the canons of the clergy with the advice of wise lay people,”

Much later, said Macy, came the canon that bishops were to be appointed by the pope.

“In fact, the papacy did not even claim the right to be able to appoint bishops worldwide until the very end of the 19th century," said Macy, “and the practice only became encoded in law in 1917.”  Until then bishops were chosen by their clergy and approved by their congregations or were chosen by the heads of states, he said.

Before ending his talk he underscored the idea that the church, as we know it today, has not remained the same. Rather it has undergone considerable structural change over time, changing with the needs and dictates of the times. Knowing church history, he said, can encourage those working to see the church continue to change.

Before ending his talk he made one more point, an encouraging note. He said: “So one can see that communities who now choose their own leaders, and whose leaders lead the liturgy because they are their leaders, are actually following an ancient custom of the church. In a time when new leaders are emerging, particularly from communities that don’t have ordained leaders, we should consider seriously the models that the first thousand years of Christianity present to us.”