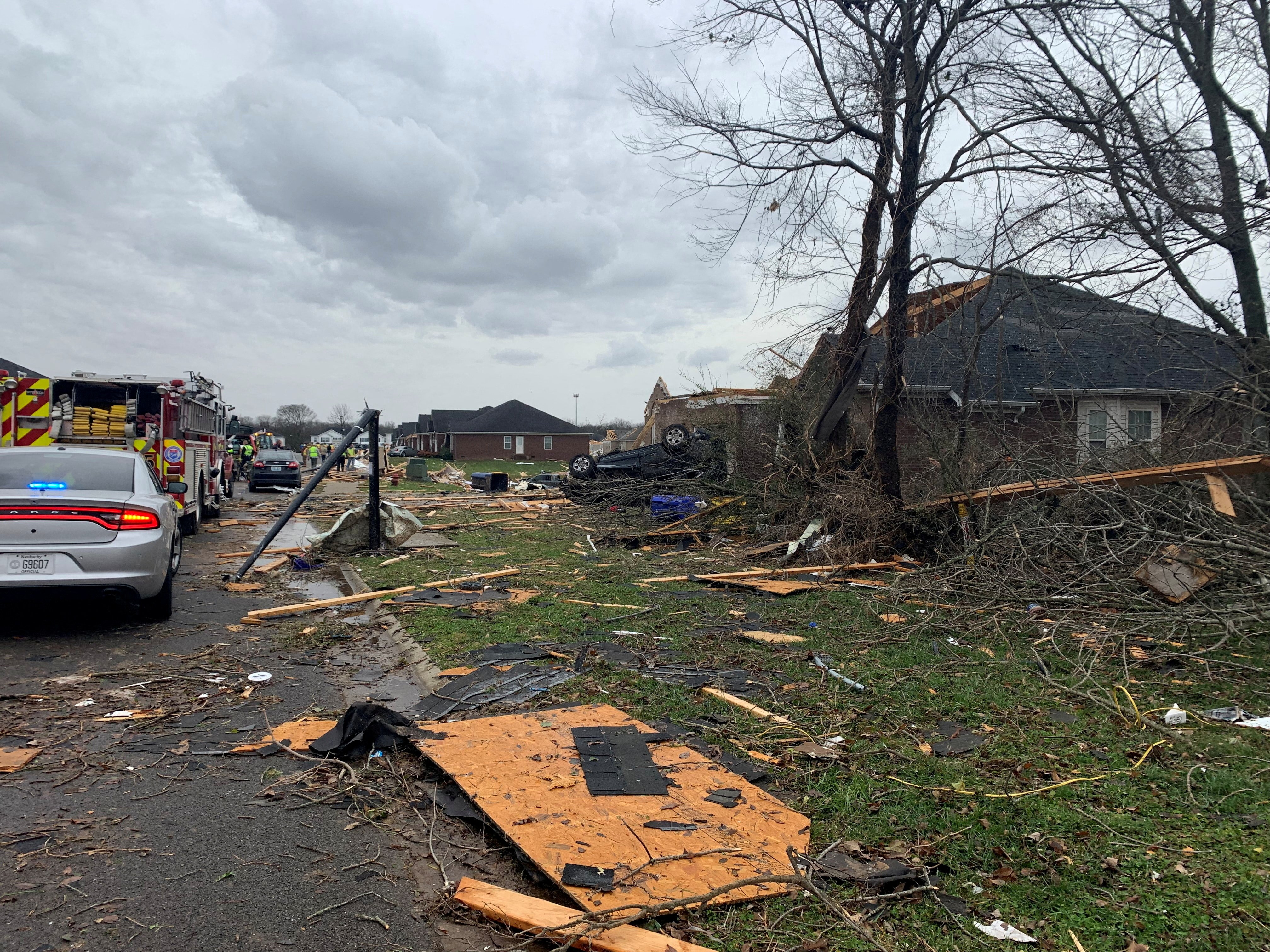 The creaking sound of the swaying chains was eerie.

What usually held the red candle above the tabernacle in Resurrection Church in Dawson Springs was now an empty metal structure suspended by chains, spinning in the cold December wind but not quite hitting the damaged walls on either side of it.

Hank and Lesley Mills, driving to check on the church around 6:30 a.m. Dec. 11, had discovered that Resurrection was among the area's structures devastated by the tornadoes — and that the Blessed Sacrament had made it through the storm in the sturdy tabernacle.

"I've never seen anything like this in my life," Lesley Mills told The Western Kentucky Catholic, newspaper of the Owensboro Diocese, in an interview Dec. 15.

Resurrection's Deacon Mike Marsili and his wife, Ashley, came by not long after the Mills.

Right now the tabernacle, along with lots of other church furniture, is being kept at the Marsilis' house, which survived the storms without any damage.

Resurrection is just one of the many buildings destroyed by the tornadoes that hit western Kentucky during the night of Dec. 10, setting records as the worst tornado outbreak in both state and U.S. history.

But for Deacon Marsili, it is like losing another home.

As a child, he grew up in a family that didn't practice its faith and when the family moved to the Dawson Springs area, he was invited to attend Mass by some parishioners at Resurrection. The rest was history — and Deacon Marsili credits that invitation to ultimately leading him to enter the diaconate.

Deacon Marsili said he is grateful for everyone who is helping their hurting community.

"The state police, the National Guard, the military have all been unfailingly polite and helpful," said Deacon Marsili. "The Amish and Mennonite communities have been amazing, coming in day after day (to clean up). Everything they can do, they're doing."

He said one of their sister parishes, Immaculate Conception in Earlington, told Resurrection that it would take care of their bills for the time being. The Earlington, Kentucky, parish shares pastor Father David Kennedy with Resurrection and Holy Cross Parish in Providence, Kentucky.

Parishioners Jeff and Laura Smith, who live just outside Dawson Springs and did not experience any damage, have opened their doors for neighbors to shower, and even have some people staying at their home for now.

"No one at our parish was seriously injured, though one parishioner lost her house as she stood in her hallway," said Jeff Smith.

Michelle Zaparanick-Brown, who today lives in Versailles, Kentucky, had traveled to Dawson Springs Dec. 10 with her sister and daughter to visit with her parents, Resurrection parishioners Beri and David Zaparanick, and do some Christmas baking.

They rode out the tornado together that night.

"It was so windy," said Zaparanick-Brown, "and such a loud, loud noise."

The Zaparanicks, like most in Dawson Springs, lost power, but have since received a generator.

Not far from Dawson Springs, Christ the King Parish in Madisonville, Kentucky, has been a hub of activity as volunteers — most of them teenagers — operate a gym transformed into a community resource center.

LaGrange said she asked for volunteers at the Saturday night vigil Mass at Christ the King Dec. 11, and the efforts exploded into a massive community-service production.

Besides offering clothing, toiletries and other essentials, the Madisonville volunteers have been giving out lots of generators and also mattresses — for people staying safely with loved ones but who lack something to actually sleep on.

"It's the people who have made this amazing," said LaGrange, who has organized several other teen community-service projects in the past.

Father Carl McCarthy, Christ the King's pastor, said the volunteers and donations have him "overwhelmed."

"We couldn't do it without Camryn," he said, adding that "we are here for the long haul."

Lesley Mills — who happens to be Christ the King School's principal — has stayed busy by volunteering with Christ the King's community service. She and her husband live just outside Dawson Springs, and they did lose power, but her focus is on those who were hit harder.

She said they have been inundated with donations, so right now what the community needs the most is "lots of prayers — and don't forget about us in two weeks, or a month ... and not just us, but also Princeton, Bremen, Mayfield, Bowling Green, (etc.)"

In Mayfield, Kentucky, the people of St. Joseph Parish have started operating a resource center out of their parish hall to provide supplies to those impacted by the storms.

Alfredo "Freddy" Gonzalez has been coordinating the parish's efforts with Catholic Charities of the Diocese of Owensboro to help the people of Mayfield, which was one of the worst-hit areas in the path of the tornadoes. St. Joseph is a predominantly Hispanic/Latino parish.

Gonzalez himself is Hispanic, and many of the parish volunteers are Hispanic, but he said they help anyone who comes for aid.

"Every race is involved in this," he said. "We have to help each other."

Fortunately, they have plenty of supplies thanks to generous donations.

"If people want to help, the best thing is to pray," he said. "Pray for the people who have lost their families and houses."

Back at Dawson Springs, the cleanup will be a long process. The now-empty tabernacle alcove has debris scattered about from the storms, some of it not even belonging to the church.

But on an exterior wall just several feet away is a large depiction of the risen Christ, arms outstretched, reminding passersby that this is not the end of the story.