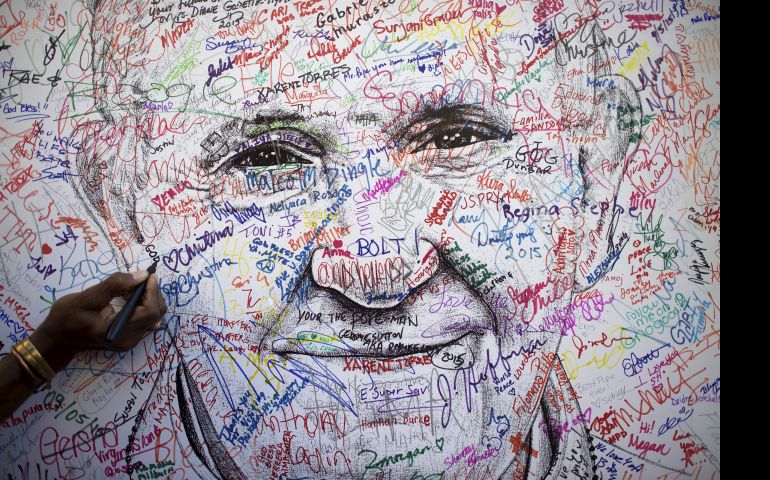 A delegate to the 2015 World Meeting of Families signs a poster drawing of Pope Francis by artist Mark Gaines Sept. 23 in Philadelphia.(CNS photo/Mark Makela, Reuters)
This article appears in the Francis in the United States feature series. View the full series.

Philadelphia — style="line-height: 20.8px;">At the Catholic church's World Meeting of Families, LGBT Catholic activists and advocates for the church's traditional teaching on sexuality agree on one thing -- the church isn't always an easy place to have these conversations.

"To many, the Catholic church is not a warm place," said Janet Smith, a professor of moral theology at Sacred Heart Major Seminary in Detroit. She is co-editor of the new anthology Living the Truth in Love: Pastoral Approaches to Same-Sex Attraction, which adheres to the church's traditional teachings about sexuality.

In years past, Catholics lived in neighborhood and ethnic parishes, Smith said, "and there was a sense of community. Now people live away from home, and go to large parishes and don't feel greeted or at home."

The lack of community may feel particularly acute to those experiencing same-sex attractions, she said. Some may feel "condemned to a life of loneliness. No Christian should ever feel condemned -- particularly if they are following church teaching," which means they must remain celibate.

LGBT Catholics who don't strictly adhere to the traditional teachings experience even more separation from the church community -- even at the World Meeting of Families, being held in Philadelphia Sept. 22-27.

Margie Winters lost her job at a suburban Philadelphia Catholic private school, Waldron Mercy Academy, after two parents of students objected to her same-sex marriage. Winters spoke Tuesday (Sept. 22) at a press conference held by Equally Blessed, a coalition of several groups supportive of LGBT Catholics who are not celibate.

Equally Blessed was holding session in a Methodist church around the corner from the Pennsylvania Convention Center, the main venue of the World Meeting of Families, because the group had been first denied a booth on the inside and then barred by Philadelphia Archbishop Charles Chaput from using a Catholic parish nearby.

Winters said, "We ask the church to reflect on its own identity, an identity now associated with the discriminatory treatment of the LGBT community. We are your sisters and brothers in faith."

The packed, four-day schedule of the World Meeting of Families had a single session devoted to families and homosexuality. Scheduled for Thursday afternoon in the main hall, which is capable of seating at least 10,000, it was moved at last minute and without explanation to another room capable of seating only about 1,000. Hundreds of others were turned away, the doors shut on them by convention center officials, citing fire code regulations.

Some members of the Equally Blessed coalition are attending the World Meeting of Families as individuals, and the organization is offering hospitality and hosting counterpoint talks.

The same kinds of struggles happen at home, away from big conventions.

Fr. Jim Shaughnessy, who serves two Kansas churches, says that he struggled with the catechism's definition of homosexuality as a "disorder" -- until he realized, upon reading one of the prayers for Sunday Mass, that all human desires are described that way.

When it comes to how that teaching is lived out in practical terms, Shaughnessy said, "we are probably not the best. Believers are called to balance mercy with clarity on church teaching on appropriate sexual expression, but rarely address same-sex attraction at all in a pastoral context."

"We are called to love all people and it doesn't get done," Shaughnessy said.

Several families in his parish experience know each other, but don't realize that they share the experience of having gay children, he said -- and he's bound by pastoral confidentiality not to tell them.

Susanne Cassidy, Catholic mother of two gay sons and a longtime PFLAG activist, met with Chaput last year to discuss issues. Cassidy told NCR that she and her companions were "pretty out there with him. I said to him that if all the diocesan priests who were gay came out -- sharing orientation, not behavior -- the public would have a very different view."

While Chaput was gracious, Cassidy said, he was also unyielding, intimating at the end of the meeting that if they didn't subscribe to Catholic teachings on homosexuality, they shouldn't consider themselves Catholics.

"As people who have worked for and supported the archdiocese, it was very painful to hear that," said Cassidy -- who wishes she'd had time at meeting's end to respond.

These days, Cassidy doesn't attend church on a regular basis, saying her prayers at home, she says.

Though Pope Francis is using gentler language, she said, "when you're hurt so many times by the church, it's difficult" to be optimistic.

"I think people have read a lot into the pope's statement not to judge," Smith said. "He's said that he's a son of the church and doesn't change doctrine. But he is a pope of mercy."

Fr. Philip Bochanski, an associate director of Courage, a ministry that provides support for Catholics who experience same-sex attraction but want to practice chastity, agrees that Francis isn't aiming to make changes in church teaching on sexuality. On the other hand, he says, believers need to defend those who are being bullied or ostracized because of their orientation.

In finding a balance between an overly monochrome emphasis on church teaching and a desire to not offend by glossing the faith over, Bochanski said, "we all need to practice compassion and be brothers and sisters to one another."

Encounters with members of Equally Blessed as they visited the Courage booth in the exhibition hall have been friendly, he said.

Loretto Sr. Jeannine Gramick, who has spent more than 40 years working with the LGBT community, told NCR that she doesn't think the pope cares much about doctrine. "The bishops are preaching the old law, which is doctrine and teaching. It's the old law that binds people, while Pope Francis is preaching the Gospel of love."

In conversations with Catholic LGBT activists about the pope, she's witnessed new excitement, even elation, she said. "Some say that while he says wonderful things, there hasn't been any change in doctrine. I say, he's not interested in doctrine. Changes in doctrine come way down the line and that's not as important."

All agree that when it comes to LGBT issues, there is much ground still to cover.

"I think we're growing; I think we're learning" Smith said. "We have to make sure that each Christian has a sense of family, and of community."

[Elizabeth Eisenstadt Evans is a religion columnist for Lancaster Newspapers Inc., and writes for NCR and GlobalSisterReport.org.]