V Encuentro to be an 'expression of community' 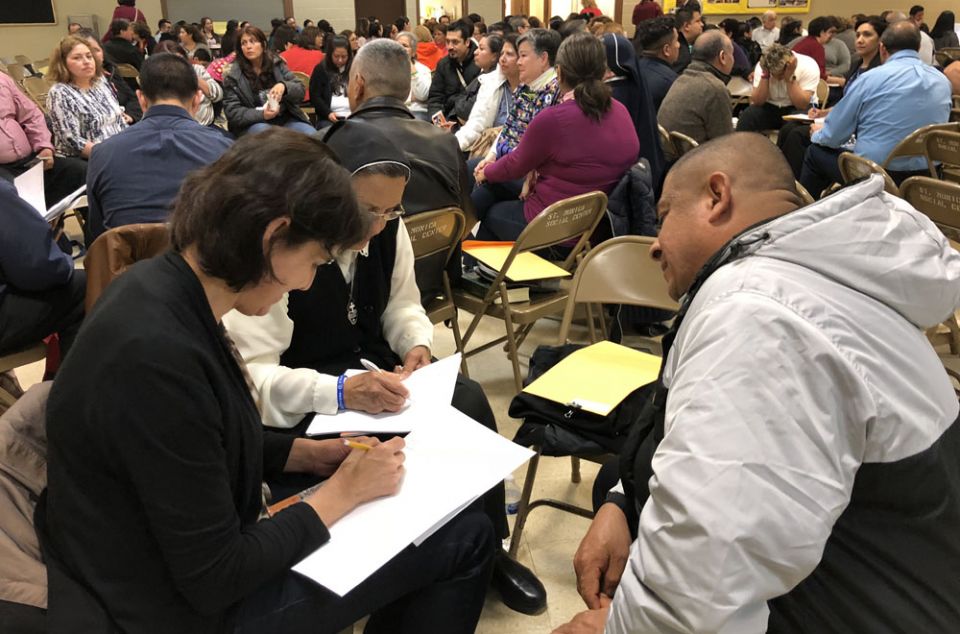 A woman religious and other delegates share information during a regional encuentro in the Diocese of Rockford, Illinois, April 28 at St. Monica Parish in Carpentersville. (CNS/El Observador/Margarita Mendoza)

The four-year nationwide consultations with the Hispanic Catholic community will culminate at the national V Encuentro Sept. 20-23 in Grapevine, Texas, as delegates from around the United States gather to form a collective Hispanic Catholic voice — one that will be imperative to the future of the church.

With Hispanics making up 40 percent of U.S. Catholics (a number that swells to 60 percent when looking at those younger than 18, according to ENAVE, the National Team of Accompaniment that oversees the process), the V Encuentro is meant as an opportunity for Hispanics to organize, assess their needs as Catholics, and own the responsibility that comes with these numbers.

"How is the church going to respond to the needs and questions and concerns of the Hispanic community if we do not engage with the community?" said Hosffman Ospino, co-chair of the process committee.

The V Encuentro, he continued, "aims to close the gap."

Spanish for gathering, encuentros began as consultations at the parish level, with delegates eventually going on to diocesan and then regional levels to convey concerns, needs and ideas expressed at earlier sessions.

Ospino, director of graduate programs in Hispanic ministry at Boston College School of Theology and Ministry, said that the current process has already raised more awareness among bishops, diocesan personnel and pastors, who know that more needs to be done "to invite Latinos to assume more protagonism, more responsibility in the process of evangelization."

With roughly 3,400 participants and 130 bishops attending the upcoming national gathering, a third of the delegates at the V Encuentro should be young people and a third should be U.S.-born, Ospino said. The resulting mix "will be a model for what's happening in the near future."

The first encuentro occurred in 1972, as priests who worked with Latino Catholics wondered how to better minister to and form leaders among this new group — a successful attempt that inspired more organized encuentros, each with different goals and convoked by the U.S. Conference of Catholic Bishops.

Though identifying young leaders and opening more Hispanic ministry offices are some goals, quantifying the fruits of the V Encuentro can be a tricky and slow process, Ospino said.

"The third encuentro in the '80s triggered the opening of a large number of [Hispanic ministry] offices at the diocesan level," he said. "But the late '80s and early '90s were the peak of migration from Latin America in the U.S., so many of these were going to happen anyway."

But what the third encuentro actually did is give a purpose and a language to these communities, he said, with one focus being a shift from assimilation to integration, for example.

"I'm not interested in the numbers. I'm more interested in the philosophy, the vision, the narrative that emerges. In five years, how are the new bishops, new priests, new seminarians, new lay ministers talking about Latinos? What's the language they're using? If they're using the language of the V Encuentro process and the conclusions that emerge, then we have done well." 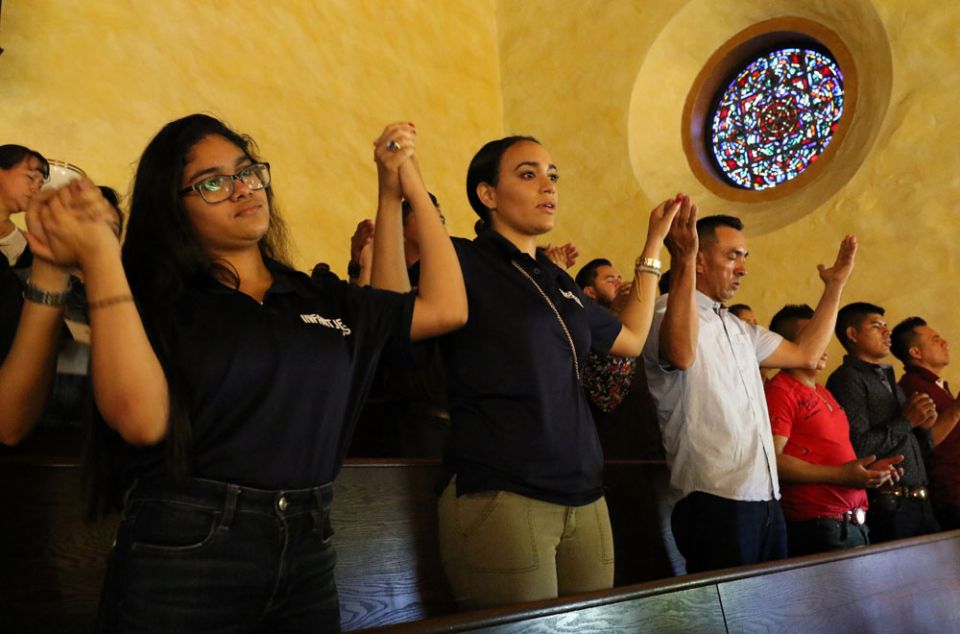 For the St. Paul-Minneapolis Archdiocese however, the V Encuentro has already yielded positive results, with separate additional encuentros emerging specific to family life.

During the diocesan encuentros, one concern emphasized was the family, said Estela Villagrán Manancero, director of the Office of Latino Ministry for the archdiocese.

When that priority was made clear, "right away we decided as a diocese to start working on it," she said. Eventually, 500 families signed up for an encuentro geared toward reconciliation between parents and their children, an effort that moved all to tears.

"They feel that they have a stronger sense of community now," said Manancero, who is also president of the National Catholic Association of Diocesan Directors for Hispanic Ministry, and who was part of the National Core Team alongside Ospino that organized the process.

Following the family encuentro, now when "one of them is in the hospital, everyone goes to take care of the children or take them to school. They bonded in a new way. For them, being vulnerable to the rest of the community is a big thing," she said.

About 60 percent of U.S. Catholics younger than 18 are Hispanic — a reality that will ultimately reshape the way we understand U.S. Catholicism, Ospino said, and a reason why the V Encuentro will emphasize youth and young adult ministry.

Juan Pablo Padilla is the archdiocesan coordinator of the lifelong formation office in Chicago, and works with the National Catholic Network de Pastoral Juvenil Hispana, which is dedicated to supporting Hispanic youths and young adults.

He said that through the encuentros, "we focused on understanding what is the reality of youth and young adult Latinos in the Archdiocese of Chicago," who mainly expressed the desire for a space where they can belong.

"Surprisingly, we also found out that a lot of people who go to the youth and young adult groups don't necessarily see themselves as religious," Padilla said. "They may believe in God, but not necessarily organized religion; some are showing up having no faith or really not believing in God at all, but still participate in the groups," or some youths who identify as Catholic and are active in the ministries aren't engaged in everyday parish life. "The V Encuentro uncovered that reality."

Padilla said that they were also eager to talk about pastoral ways to minister to fellow young adults who identify as LGBTQ. "There are kids showing up to groups that have these concerns about themselves," he said. "Of course, they are open and embracing but would also like to have a more intentional conversation around the subject matter."

In one conversation at the regional encuentro that included Illinois, Indiana and Wisconsin, they discussed "where young Latinos stand when it comes to the greater U.S. in terms of culture and how they are in society; how they're able to integrate and what does it mean to be Latino," Padilla said.

They also discussed how most of the work by youth and young adult minsters is entirely on a volunteer basis, and while they're willing to do the work, "they're saying they need more preparation or formation," Padilla said, and they engaged with Chicago Cardinal Blase Cupich on the kinds of tools they'd need to "deliver the right amount of leadership."

Padilla recalled a comment by a young adult during the regional encuentro: "If we don't engage and work with young people, then what kind of church are we going to end up?" 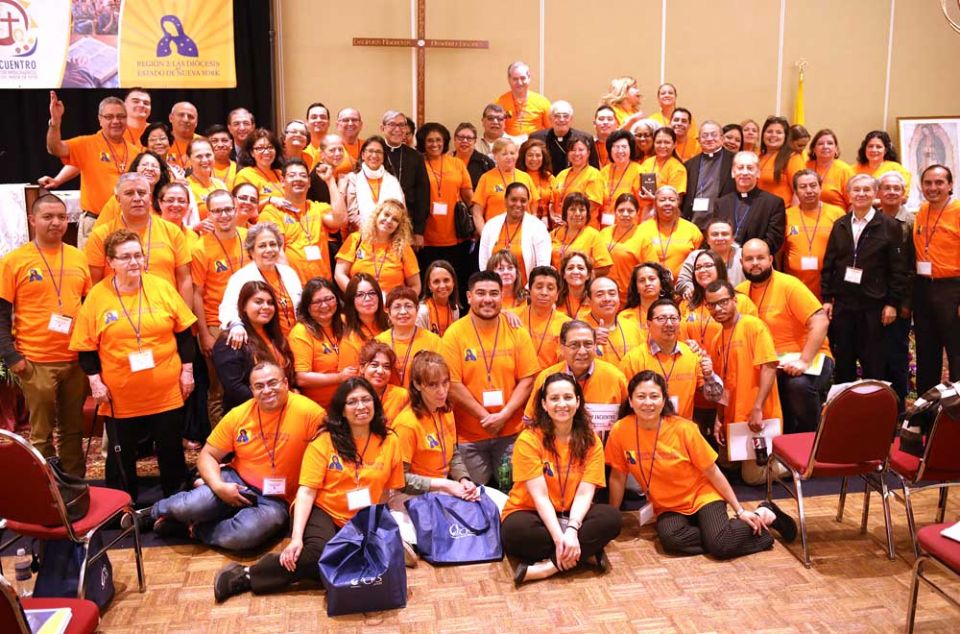 Delegates from the Diocese of Brooklyn, New York, pose for a photo June 23 during the Region II encuentro held June 22-24 in Albany, N.Y. (CNS/Courtesy of Cesar Gonzalez, AGC Media)

Outside the youth and young adult conversations, issues such as immigration reform and more Spanish Masses remained urgent topics that perhaps don't speak to the younger generations directly, who are overwhelmingly U.S.-born. They may care about these issues, but they're in the back of their minds, Ospino said, as they might be more concerned with access to education and leadership opportunities.

"Latinas and Latinos, especially the immigrant population, were looking for a space to express their voice and to affirm their faith — and that was good, the encuentro provided the space," Ospino said. "But we still owe the U.S.- born generation more time, more energy and more strategies to connect with them." 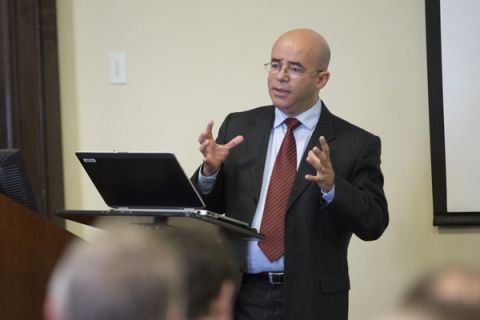 Hosffman Ospino, assistant professor of theology and religious education at Boston College's School of Theology and Ministry, delivers a lecture in 2017 at The Catholic University of America in Washington. (CNS/Jaclyn Lippelmann, Catholic Standard)

Though the process was intended for Hispanic Catholics, Anglos were welcome to join in the encuentros, too, though few did. That the process had a Spanish name may have caused misunderstanding that it was exclusive to Latinos, Ospino said, or "it may reflect how Latinos are perceived in different parts of our church: people who think they're mainly immigrants, many who perceive Latinos as primarily Spanish-speaking," or who may be unaccustomed to being served by the Latino community.

For Hispanic Catholics from coast to coast to share challenges and best practices with bishops, lay ministers, diocesan personnel and theologians at the table — "to me, that's invaluable," Ospino said. "That's exactly how we do pastoral planning. People will have a chance to express their voice in light of their own faith.

"Here at the V Encuentro, we're not just going to have a couple of experts who are going to talk about Latinos. … It's going to bring together thousands of people — Hispanic Catholic women, men, people who are highly educated and without much education, young people, campesinos — and then we all together say, this is our voice. That's an expression of community."

Padilla has already attended a national encuentro, and said that though the national events tend to be abstract in the sense that the results aren't visible or felt until years after the fact, he hopes it "strengthens our national organizations, giving us tools and motivation to bring back home to continue the follow-up."

"I hope it becomes a celebration that leaves people feeling empowered to go back home and create some wonderful things and be innovative and be ministerial entrepreneurs," he continued. In Chicago, "the experience of the V Encuentro has already created new leaders in that they see themselves in a larger role at the archdiocesan level. … If there's anything that I've learned, the young people that are delegates have taken ownership and have taken it very responsibly."

More than anything, Ospino said he hopes that the V Encuentro — the process, the national meeting, and the consultations that continue — is seen as a "moment of hope for the U.S."

"It's not a rally, it's not just another convocation, but it's a moment of hope in which we get to learn more about who we are as a church and the possibilities. … Let's see where the Spirit guides us."

[Soli Salgado is a staff writer for Global Sisters Report.]

Parish | V Encuentro to be an 'expression of community'