Wisconsin bishop threatens denial of sacraments for 'rumors and gossip' 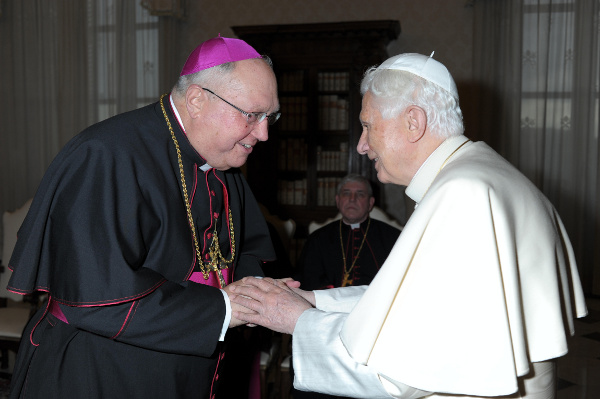 Pope Benedict XVI greets Bishop Robert C. Morlino of Madison, Wis., during a Feb. 10 meeting with U.S. bishops from Wisconsin on their "ad limina" visits to the Vatican. (CNS/L'Osservatore Romano)

MILWAUKEE -- Despite warning signs that they would not win the fight to oust their priests, parishioners in a small Wisconsin town didn't relent. Neither did their bishop, Robert Morlino of Madison.

After battling for almost two years, members of St. Mary Parish in Platteville were told by Morlino on April 25 that if they persisted in what he characterized as spreading "rumors and gossip," the Catholics would face some of the church's harshest sanctions: the denial of the sacraments of Communion, confession and burial.

"I didn't think he'd go that far," said Myron Tranel, a member of the parish finance committee. "I think most people are more angry with the bishop right now than they are with the priests."

Parish protestors say the new priests have brought in pre-Vatican II practices and offended many in the congregation. Contributions to St. Mary have dropped by more than half and hundreds have left for other parishes or Protestant churches. Morlino's warning to the dissident parishioners came in a letter announcing the closing of the parish school, even though the parish had just raised $1.8 million for capital improvements. The money, according to lay leaders, will have to be returned to donors.

The closing of the parish school, which has been supported in significant part by parish donations, appears to have brought the long-simmering dispute to a head. Morlino said in his letter that he offered a guarantee of emergency funding for the school and that the priests had worked out a plan for operating on a reduced budget. Parishioners, Morlino said, saw the removal of the priests as the only solution.

"This would, I have been told by many people, ransom the school from those who are protesting and return giving to its previous level," Morlino wrote. "But, as evidenced by the very fact of this situation of protest and refusal to support the needs of the Church, the deficit at St. Mary and St. Augustine Parishes is of a much greater kind."

St. Mary was a tranquil parish with a thriving elementary school until June 2010, when Morlino assigned three traditionalist priests from the Society of Jesus Christ the Priest to the parish. They replaced a beloved pastor, Msgr. Charles Schluter, who had served the 1,200-member parish for more than a decade.

Such transitions are always difficult, everyone acknowledges. Some parishioners said the new priests made too many changes too quickly.

Platteville is not a radical community. It has a population of about 11,000; the university and a handful of engineering firms attracted to the school's engineering school are the biggest businesses. Farms surround the community.

"This is basically a conservative community," said Rose Mary Anderson, a former member of the parish council. "It's not liberal like Madison."

Nonetheless, Anderson said the changes wrought by the new priests "were shocking" to many in the parish.

The order of priests was founded in 1957 by Fr. Alfonso Gálvez and is based in Murcia, Spain. Priests of the order live in community and have a special ministry to Catholic youth, according to the Madison diocesan website. Fr. Faustino Ruiz is now St. Mary's pastor and he is assisted by Fr. John Del Priore. Ruiz and Del Priore also serve a smaller campus parish in Platteville, St. Augustine, the parish associated with the local state university. A third priest of the order lives in the Platteville community and serves a parish in another nearby small town. Six other members of the Society of Jesus Christ the Priest serve parishes in the diocese that covers 11 counties in the mostly rural part of southwestern Wisconsin.

"They had a reputation of upsetting another parish with their very conservative ways," Anderson said of the order. "Right away, they said no girl altar servers, only priests could give Communion and they disbanded the group that took Communion to the homebound. They said the basis for what they were doing was that Vatican II had been misinterpreted."

About four months after the priests arrived, parishioners petitioned the bishop to remove the priests. Morlino called the conduct of some in the parish community "gravely sinful" and ordered them to stop.

"It grieves me to acknowledge that the reputation of three happy, holy and hardworking priests has been seriously tarnished by rumor, gossip and calumny (lying with the intent to damage another's good name)," Morlino said in a letter dated Oct. 28, 2010.

In that letter, Morlino addressed almost a dozen concerns raised by members of the parish. None of the complaints involved false teaching or liturgical error, but some of the claims involved "correctable errors" that had led to hurt feelings, Morlino said. He stood by the priests and told the parishioners to talk to them instead of him. "I am confident you will be treated with dignity and respect," Morlino added.

Chief among the complaints appears to be a diminished role of the laity and insensitivity toward people of other faiths, including spouses of parishioners. One often-repeated story among parishioners -- several did not want their names used -- is that one of the priests teaching third-graders asked what becomes of non-Catholics when they die. "They go to hell," responded one child. The priest reportedly high-fived the child and said "I like the way you think."

Neither Morlino nor anyone from the diocese would respond to a request for an interview. A spokesman from the diocese wrote in an email, "We have no hope that assisting NCR with a story will result in a just reporting of the facts regarding the sad situation in Platteville." Ruiz also did not return a reporter's call.

The priests have their supporters in the parish.

Gregory Merrick joined St. Mary after hearing about the priests two years ago. He lives in Mineral Point, 25 miles away, and drives in for a 7:30 a.m. Latin Mass. He is also a member of the Gregorian chant choir. He said he believes the priests are divine, not divisive.

"The changes they made are stylistic," said Merrick, whom the pastor appointed to the parish council. "The changes are not doctrinal. Everything that these priests bring with them is good Catholic doctrine. They preach the unvarnished truth of the Gospels."

The root of the problem, Merrick said, is that the church has been infused with culture and strayed from the core teachings.

"There is a 'cultural Catholicism' which is a polite Sunday experience," Merrick said. "It's faith based on the Beatitudes without the law attached. People don't want the discipline that comes with being Catholic."

The Platteville situation, he said, is a microcosm of what is happening throughout the church. The Platteville parish, like the broader church, will survive, he said.

"As the dust settles, it will become smaller and more focused," Merrick said. "Pope Benedict has said the same thing. If that's the consequence, then fine."

Meanwhile, Tranel said he is going to Mass at parishes in nearby communities. "This doesn't have anything to do with religion," Tranel said of the dispute. "It's about power and control. I love my religion and I will always be a Catholic. They can do whatever they want, but I'll still be a Catholic."

For Anderson, it's been a little tougher. She and her husband now attend a Methodist church, the faith of his family. Her two sons both attended the parish school but now are no longer Catholics. She said she cannot accept the teaching that they will not get into heaven.

"I'm a rosary-saying, candle-lighting, novena-praying Catholic," Anderson said. "I thought about going to a parish in another town but as priests retire, those parishioners are worrying about what kind of priests they will get."

The pluses and minuses of married priests