Baptism and the paradoxes of Christian community 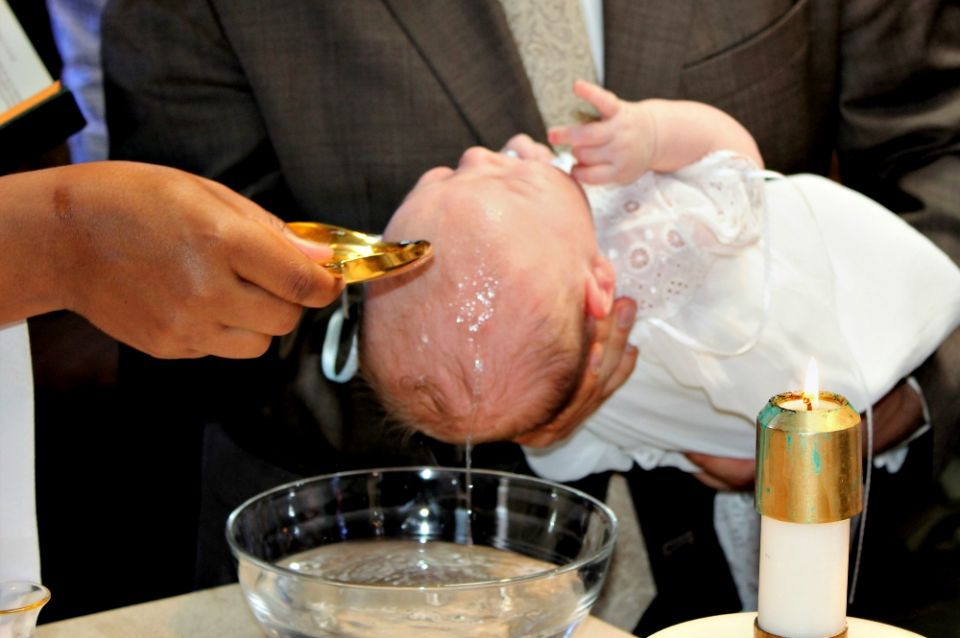 The baptism of George DeSales Piper on Oct. 1 at St. Barnabas Parish in Chicago (Provided photo)

"The Christian community welcomes you," the priest said to my son, George DeSales, on his baptism in St. Barnabas Parish's Holy Spirit chapel, following the rubric of the rite of baptism. That phrase has stuck with me since the baptism on Oct. 1. I keep asking myself, just which community is my son being baptized into, what makes it Christian, and who is on the welcoming committee?

But first, as a 29-year-old adult, the preparation for my second child's baptism allowed a welcome respite, no, a complete departure from the futile attempts to find a parish community that attends to, supports, or engages young adults and their spiritual needs.

My wife and I attended a parish that was beautiful and welcoming but nonetheless one that we needed to leave because Rachel, our firstborn, is now 3 and was the only child at Mass on Sundays. We switched parishes to ensure that she was a part of a vibrant community of children her own age. As we discovered, with children, one's priorities, including those of a spiritual nature, change.

As strange as it sounds, in an age of individualism, perhaps even hyper-individualism, there seem to be a plethora of communities. One's family, circle of friends, school, neighborhood, office colleagues, parish, Facebook groups, et cetera — big or small, personal or digital, open or initiated, communities abound. We are generally in multiple communities at once; some we like more than others, and perhaps some we would rather not be a part of all together.

Community is a rather broad term and, like most anything, it can have its extremes. We can build a community when we leave our office door open, when we sit outside our house and say hello to passersby, when we actually engage in conversation with the shop owner in the neighborhood, or attend local events.

We can also do our best to destroy communities by forming cliques, by claiming membership but not showing up or putting up the effort. We're also good at subdividing communities, be these religious, cultural or political: liberal versus conservative, traditional or modern, in-power or out-of-power.

Communities, like businesses, seem to have a life cycle. Times of growth, maintenance, decline and hopefully growth again. But this article isn't about communities in the broadest sense. It's about a particular type of community, one that involves initiation and intentionality: Christian communities.

The preparation for the baptism and the changing of parish communities for my family reminded me of a bit of writing from Dietrich Bonhoeffer. In my own year living in an intentional community, Amate House, I discovered a great many spiritual writings and concepts, including some of Bonhoeffer's. Of these, I think the most pertinent is this:

God hates this wishful dreaming because it makes the dreamer proud and pretentious.

What makes any community Christian, it would seem, is it being centered in Christ as God. As such, those members of the community place God in the center. But Bonhoeffer offers a warning about some Christian communities — formal or informal — that I think we have all observed or been a part of. Communities where persons love and yearn for the ideal concept of a perfect community rather than where persons love and yearn for the best of the actual people they are in community with. Love thy neighbor, not thy expectation of the perfect neighborhood.

If the church is truly catholic, that is, universal, there is a great paradox: that though it is universal, it is certainly not a monolith. The missionary creativity from parish to parish, diocese to diocese, ministry to ministry, though rooted and faithful to Christ and his church, expresses itself in a multiplicity of diverse and intercultural ways. 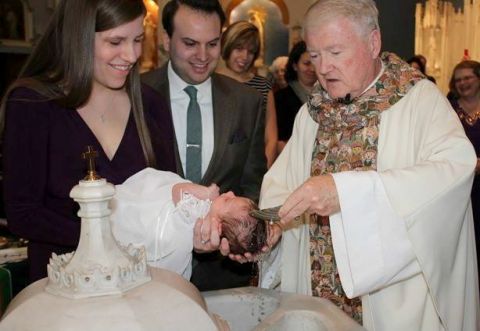 I rather like that. Even in light of baptism, when my daughter was baptized at St. Margaret of Scotland in Chicago, the priest preferred it happen during the Mass. Three years later, at St. Barnabas just down the road, the priest preferred it happen after Mass. Both are valid, but this highlights how we can honor the differences in our local communities while having integrity to the broader community or church.

But this paradox shouldn't be surprising. After all, we follow a paradoxical God: One who had to die so that we might have life.

With joy, my wife and I baptized our children, accompanied by their godparents, relatives and some friends. Our children, as the rite states, have put on Christ and joined his community, his mystical body. I suppose those of us present were the first and most lasting welcoming committee to George and Rachel as they joined the Christian community.

But, in the Christian community, the welcome should never end. There will be more celebrations, more sacraments, continued learning, opportunities to be of service, and eventually, we hope, the final community: the communion of saints.

And, yes, we know that some folks may make being welcoming rather difficult, if not a miraculous endeavor. But through prayer and perseverance, we press on because no one wants a grouch to have the last word.

I quoted Bonhoeffer, and his warning for idolizing the concept of a Christian community rather than loving those persons who make up the community. I'd like to close with another quote. It's not a warning, but it complements Bonhoeffer insofar as it details how we can build communities that keep our focus on each other as persons to engage, rather than as problems to be solved on the way to the perfectly conceptualized Christian community.

Because, if you ask me, community is the name of the game; it is what we're all about. And I'm glad that Rachel and George are along for the ride.

As Jean Vanier wrote in Living Gently in a Violent World:

Maybe the most important thing is to learn how to build communities of celebration. Maybe the world will be transformed when we learn to have fun together. I don't mean to suggest that we don't talk about serious things. But maybe what our world needs more than anything is communities where we celebrate life together and become a sign of hope for our world. Maybe we need signs that it is possible to love each other.

Column | Baptism and the paradoxes of Christian community

Grief 101: suggestions for the loved ones of grieving parents

Momentum builds for paid parental leave in the U.S. church

Spare the spanking, respect the child

We are priests, prophets and kings