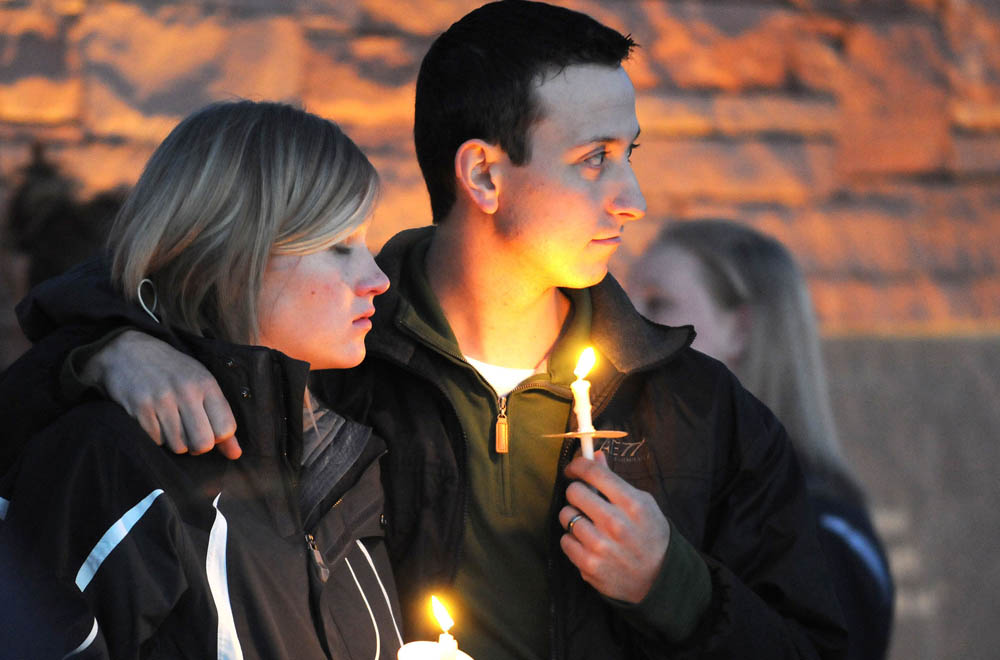 An unidentified couple attend a candlelight vigil at the Columbine Memorial in Clement Park in Littleton, Colorado, April 19, 2009, the eve of the 10th anniversary of shootings at Columbine High School. (CNS/James Baca/Denver Catholic Register)

The names were once obscure. But now Columbine, Parkland, Sandy Hook and Annapolis, along with dozens of others, are crisis points etched into the American psyche.

When crisis happens, some Catholics, even those who haven't darkened church doors for years, flock to their parishes, looking for spiritual support and community. Kathy Hendricks, an experienced religious educator and parish minister, says that parishes need to be ready.

Hendricks, based in Larkspur, Colorado, was a parish minister in Littleton, Colorado, when the nearby Columbine High School massacre took place in 1999. "No one prepared me for this," she remembers saying to herself, as she recounts in her booklet The Parish Emergency Kit: Responding with Compassion when Tragedy Strikes (Twenty-Third Publications).

The booklet offers short outlines of how parishes can respond via actions and scriptural reflections to violent events, natural disaster, political upheaval and human rights abuses.

Hendricks recalled that the church was filled the Sunday after the massacre. The parish life coordinator, a layman, spoke about the impact of Columbine on his view of fatherhood. The talk was a mixture of rage and consolation, and effective, writes Hendricks, because it reflected widespread feelings.

The talk concluded with an invitation to receive the anointing of the sick. The ritual, she writes, conveyed "through action what words cannot."

Hendricks told NCR that the 55-page booklet came out of her own experience in parish ministry — she has been involved in church work in Alaska, British Columbia as well as Colorado — and personal experience with tragedy. Columbine was first thought of as an aberration, but now the violent events have piled up through the decades. Parishes have been pressed, in the words of Pope Francis, to respond as spiritual field hospitals for the spiritually wounded.

Violent events "requires a lot of pastoral response at a moment's notice," said Hendricks. Her advice includes an admonition to avoid much religious talking and to embrace religious ritual.

When tragedy strikes, platitudes and easy answers, such as "it's all in God's plan," are not helpful to those suffering.

"There are times when you can think out the theological meaning," she said. "But it doesn't happen in the beginning." Closure doesn't happen quickly or at all. The news cycle moves on, but the communities remain wounded, she said.

Tragedy need not be seen in massive acts of violence. Every parish deals regularly with events that are shattering to those who are personally affected.

More than 40 years later, Hendricks remembers the homily presented at the funeral of her 1-year-old daughter. "Don't forget them," the priest said about her family to the congregation. That message is repeated in her booklet as advice for parish communities assisting those affected by tragedy and violence.

Parish communities themselves are social organisms that can also feel the impact of violence. Hendricks recalled a parish involved in a dispute over the dismissal of a youth minister. Sides were established about the pastor, both pro and con. There was palpable anger.

When diocesan mediators came in to discuss the issues, they discovered that the suicide of a pastor more than 20 years before still lingered in the memories of longtime parishioners. That memory affected how parishioners viewed their church, even though at the time of the suicide, diocesan officials emphasized the need to move on with the appointment of a new pastor.

"We just kind of move on. It's past history. But it never is. There's wounding we have to be aware of," Hendricks said. "The more you tamp down on the secrets the more they simmer. There was unresolved grief over that suicide."

When it comes to responding to tragedy, Catholic tradition offers a deep source of symbols and support.

The image of Jesus, she said, is one "that brings consolation and not easy answers." She encourages pastoral ministers to respond by "being mindful of our rituals and how profound they are."

That focus on ritual pervades the response to tragedies, even in secular culture. Roadside shrines filled with flowers and teddy bears mark the spots where motorists or bicyclists have died. After 9/11, Manhattan was overwhelmed with impromptu shrines consisting of flowers and photographs of the dead. Similarly, Catholicism offers a long history of spiritual consolation in such times, said Hendricks.

"Catholics never shied away from the crucifix," she said. "We don't rush right to the Resurrection."

Faraway tragedies can be on the minds of worshipers on Sundays. The most effective response is to address them, not to ignore them, said Hendricks.

After the killing of a protester in Charlottesville, Virginia, in 2017 by a white supremacist, Hendricks heard an effective homily by her white pastor in Colorado. He talked about how racism infected him when he was 7 years old. He declined to offer a birthday invitation to a black classmate because he had heard bad things about black people. The priest said it was a shame he still lived with. The personal anecdote was an effective response and created a powerful message about a serious social issue, said Hendricks.

The news continues to offer opportunities for reflection. Most recently, she noted, the taking of children from their parents on the Mexico-U.S. border is another opportunity to talk about tragedies that affect those who watch them, even from afar via media accounts.

"There is tragedy going on all the time," she said. As a religious educator and parish minister, she said, those unplanned crises have provided some of her most profound moments, times when faith confronts tragedy. The parish, she said, needs to be there when people are hurting, not with programmed dogmatic answers but with a ministry of presence.

"It takes us out of the programmed model and business as usual, responding to where people are, not where we think they should be," she said.