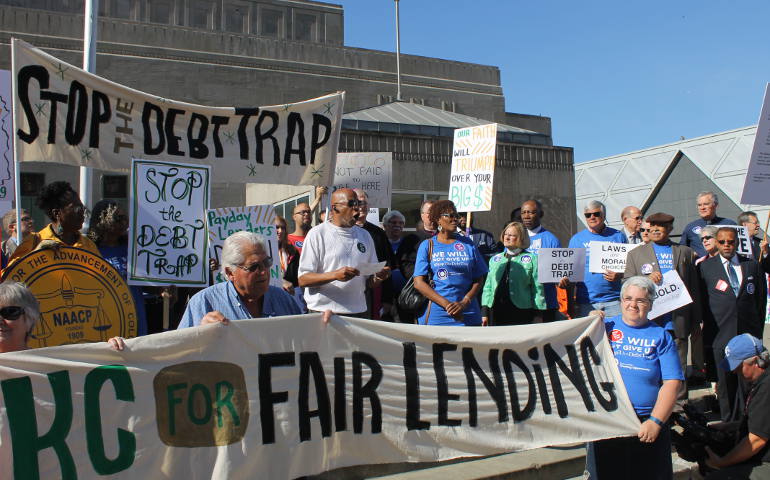 Elliott Clark, center, tells his story of payday loans that grew to $50,000 to a crowd at Barney Allis Plaza, in downtown Kansas City, Mo., before a federal hearing on predatory loans June 2, 2016. (NCR photos/Brian Roewe)

Surrounded by clergy, community organizers and multi-colored signs declaring "Stop the debt trap," Elliott Clark asked those gathered at Barney Allis Plaza here: "Who is with me?"

The parishioner of St. Therese the Little Flower Church in Kansas City had just finished sharing his experience with a $2,500 payday loan that ballooned to more than $50,000 over five years, offering an impassioned plea for reforms of the industry.

After the crowd answered his question with cheers, Clark added, "Then let’s tell the people what's going on."

Payday loans are shot-term, small-cash (typically $500 or less) loans usually due by the next payday. Annual percentage rates on the loans average 391 percent. Credit cards, in contrast, charge 12 percent to 30 percent APRs.

CFPB estimates the cost of a loan ranges from $10-$30 for every $100 borrowed, while Pew Charitable Trusts places it at $55 for storefront lenders.

According to Pew, 12 million people each year take out payday loans and spend $9 billion in fees, with an average borrower in debt for five months spending $520 in fees. Though the loans are often advertised for emergency situations, Pew found 70 percent of borrowers using them for recurring expenses, with 58 percent reporting difficulty meeting monthly expenses.

Currently, 14 states and the District of Columbia ban payday loans.

Consumer advocates argue that the nature of payday loans sets them up to hold borrowers in a constant state of repayment, as rollover fees can accumulate, lead to additional loans (half of borrowers take out a second loan to pay off the original) and quickly compound the total debt into the thousands.

A May CFPB study found half of online payday loans collect overage fees averaging $185 as lenders repeatedly make withdrawal attempts from the borrower’s account. According to the Center for Responsible Lending, a non-partisan research group, fees from payday and car title loans cost borrowers $8 billion annually.

At a prayer service before the rally, Kansas City, Mo., Bishop James Johnston used the language of boxing to describe how payday loans impact many of the borrowers his diocese has encountered.

"Low blow. Sucker punch. Hitting someone when they’re down," he said to the assembly of interfaith leaders gathered by Communities Creating Opportunities, a coalition founded in 1977 by Fr. Norman Rotert that brings together Kansas City religious and community leaders to address racial and financial issues.

"And I was thinking all these things that are unfair, actions that take advantage of somebody when they’re vulnerable, apply to this morning and why we’re gathered here," he said.

The issue of payday loans has long been a focus for CCO, which has called for a cap on average payday loan interest rates of 36 percent. The topic arose two weeks earlier during a Moral Economy Summit CCO held that brought together many of the same leaders. There, they discussed how the presence of payday loan institutes and absence of parental leave policies can keep communities down, particularly those with limited means, and impede self-sufficient growth.

Beyond the borrower, Johnston said the diocese sees the fallout of predatory loans through its Catholic Charities and other social service programs that assist people in paying rent and utilities bills while they work to pay back the loans.

"So in effect, we’re all paying the price to keep the organizations in business," the bishop said.

Fr. Stephen Cook serves as pastor to both St. Therese and St. Peter Church, also in Kansas City. When he arrived at St. Peter seven years ago, Cook noticed there were a dozen payday lenders within the parish boundaries -- all located east of Troost Avenue, the historical racial dividing line in the city that the parish straddles.

Unsettled by the situation, he asked parishioners at St. Peter, located west of Troost, to redirect any charitable dollars they may have made off payday loans away from the parish and toward their neighbors to the east. By the time Cook became Clark’s pastor at St. Therese and heard his story, the priest found it, while sad, "unfortunately unsurprising."

"It's scripturally sinful," he told NCR. "And there’s no way you could argue that the average rate [in Missouri], 450 percent, is not usury."

Throughout its pages, the Bibles condemns usury, the lending money at high interest rates. Likewise has the Catechism of the Catholic Church, stating under its discussion of the Fifth Commandment ("Thou shalt not kill"): "Those whose usurious and avaricious dealings lead to the hunger and death of their brethren in the human family indirectly commit homicide, which is imputable to them."

In a 2013 letter, Stockton, Calif., Bishop Stephen Blaire, then-chair of the U.S. bishops' conference Committee on Domestic Justice and Human Development, wrote a letter to CFPB encouraging the agency to "act with your authority to protect consumers and families living in or near poverty from predatory financial products, especially payday loans."

Cook said it's up to Catholics and the faith community to make vocal that message.

On their way to the Stop the Debt Trap rally, the priest joined Johnston and roughly 70 others in a procession, singing a rendition of the spiritual "Go Down Moses," tweaking the refrain to "Tell those payday lenders, to let my people go."

The CFPB hearing revolved around the proposed rule the agency released earlier in the day. It would require all lenders -- banks, credit unions, nonbanks, whether online or storefronts -- of short-term or high-cost installment loans to ensure upfront borrowers can repay the loan in full as well as offer less risky loan options and provide written notice to consumers before attempting to debit their accounts.

Early reaction from advocates saw the rule as a first step but worried of loopholes.

Commenting on the proposed rule remains open until Sept. 14, but began immediately Thursday. For four hours opponents and proponents of the rule in a packed hall at the downtown convention one by one made their one-minute comments. A constant throughout was a tug-of-war for compassion, each side asserting to the other how the rule, if or if not implemented, would affect their lives.

Darrin Andersen, CEO of QC Holdings, one of the largest credit providers in Missouri, said during a panel discussion it was “simply unfair” to lump responsible lenders with the criminal element.

"The appropriate way to do with illegal activity is with enforcement action directed at those criminals, not with blanket regulation that would eliminate a significant portion of an already well regulated industry," he said, estimating the CFPB rule could wipe out 70 percent of businesses. He added that the payday lending industry serve a portion of the population that might not qualify for loans from other banks and credit unions, leaving them with even more limited options and perhaps push them toward unlicensed, illegal lenders.

One payday loan employee stressed that the rule would result in mass layoffs, herself already the victim of a regulation-spurred layoff that had her living in her car for a period. She urged customers that if they feel the loan will become too expensive to seek the money from family or friends.

"We are trying to make it just as much as they are," said another loan issuer. "We are always giving them the terms and the understanding of what the terms will help them through in the future so we can get them out of debt."

Often, the comments from payday loan employees stressed the personal responsibility of the borrower, that if they fall into debt as a result of their loan, it is largely of their own doing.

On the other side, commenters used a multitude of metaphors to describe how they perceive payday loans: "financial quicksand," "an undiagnosed cancer attacking every part of the lives" of its borrowers, "toxic," or the equivalent to the water in Flint, Mich.

The language of the need for access and demand from the community coming from the loan proponents reminded a minister from St. Louis of the words of another group he has sought to eliminate from his community.

"It is the same language I hear from the drug dealers," he said.

Ken Williams, president and CEO of Catholic Charities of Northeast Kansas, used his comment to describe the Family Financial Transformations program, which pays off participating families’ existing loans and reissues them at 6-percent interest rates. In addition, they require families to meet monthly with case workers to, among other things, establish a budget.

"We are a ministry to help people drive them from crisis management to self-sufficiency," Williams said.

"People get desperate and they need options but those options cannot put them in a place where they will never get out from under it," Amanda Reyes, who works with the Catholic Charities loan program, later added.

David Barringer, CEO of the national Society of St. Vincent de Paul, said the organization supports stronger regulation due to the "financial and emotional damage" its volunteers have seen. As loans get rolled over, he said, meals get skipped and medical appointments get cancelled.

"Too many struggle and frequently need help. This calls for compassion, not expectation," Barringer said.