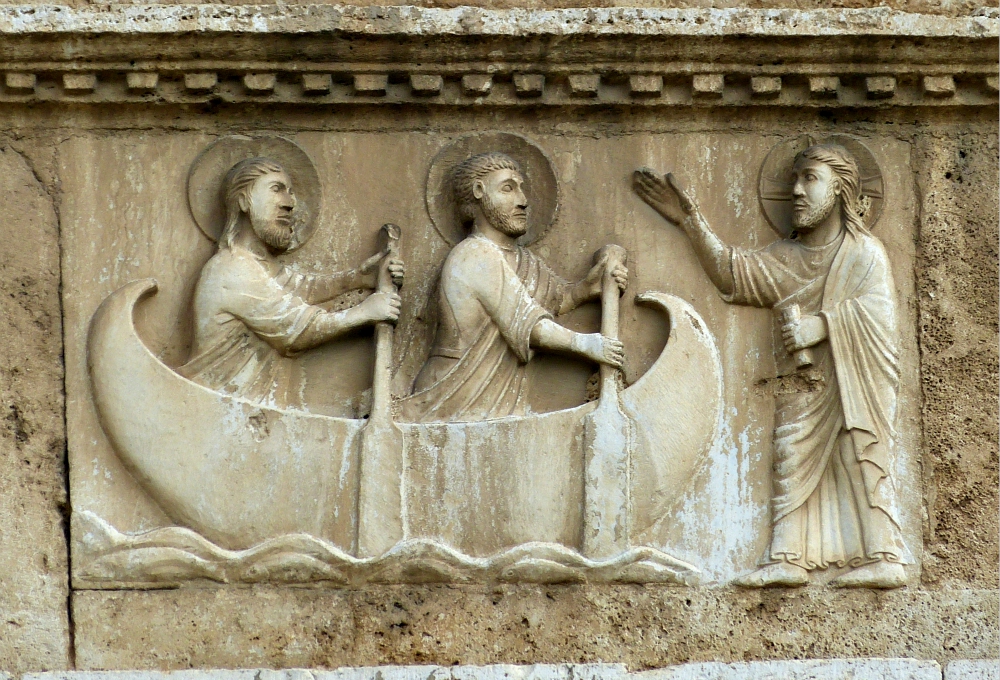 Last Sunday, we began what we call the ordinary time in the church's liturgical year. So each Sunday during this ordinary time, we begin to follow the life of Jesus and to follow his teachings as he begins to spread the good news.

Today, it's more abrupt, in a sense. Jesus comes along and he sees the disciples and says, "Follow me," and they begin to do it. In the case of John and James, they leave their father behind. They leave everything behind to follow Jesus.

But the most important thing in the Gospel is the first words that Mark says: "The reign of God is at hand. Change your lives." I wonder how many of us have really thought about what does Mark or the other Gospel writers mean when they talk about the reign of God?

It was when Jesus had started his teaching, he had gone out to different towns and villages, came back to his hometown of Nazareth, and went to the synagogue. They gave him the Scriptures to read. He unrolled the scroll of Isaiah and found the place where Isaiah proclaims, "The Spirit of God is upon me. God sends me to proclaim good news to the poor, to give the blind new sight, to set the downtrodden free, to heal the brokenhearted, and proclaim God's year of favor."

That's the good news: when all of us care about the poor as God does. "The Spirit of God sends me to proclaim good news to the poor." The first ones identified as those to whom God is reaching out are the poor.

That's why sometimes you may have heard the term in the church that there's a preferential option for the poor. That's because that's what Isaiah proclaimed God did — proclaimed good news to the poor.

But then it's also healing the brokenhearted, setting the downtrodden free, bringing justice into the world, proclaiming God's year of favor — in the Jewish tradition, the jubilee year, the time when all debts were forgiven, the time when there would be fullness of peace for every person in every part of the world, fullness of life and joy.

That's the reign of God. Jesus says it's at hand, but how do we enter into it? How do we share with Jesus in bringing it about, this reign of God, living under the dynamic power of God's love? How do we do it?

Mark tells us, "Change your lives." I wonder how many of us have ever really pondered deeply what kind of conversion I need to go through to become a real disciple of Jesus? How do I change my life? What are the values that I need to begin to live?

It's all there in the words of Jesus, his words, his example of how he reached out to people. With Jesus, it was always a personal interest in any person that came to him. He didn't treat them as objects to be taken care of. They were people, individual human beings made in the image and likeness of God. I think of lots of examples in the Scriptures where Jesus reaches out to somebody, but he does it with such respect.

There's one example (you may remember it because it's one that's easy to remember), where he's preaching and there's a huge crowd around him. People are trying to get to him; they want him to take care of their needs. One woman who has what the Gospel calls "an issue of blood," internal bleeding, is afraid to come to Jesus. But she thinks, "If I touch his robe, I'll be healed."

So in the middle of this crowd of people crowded all around, she touches his robe. Immediately Jesus recognizes it.

He said, "I felt the power going out from me." He stops everything. Where is this person?

She's afraid because, in fact, in that situation according to the Jewish law, he would have become unclean, not able to go to the temple because she had touched his robe.

But Jesus wasn't worried about that. He wants to look into her eye, see who she is, show concern and care for her. She's real to him. Finally, she is identified and Jesus does look upon her, heals her, and she goes away. Not just healed physically, but I'm sure enriched because she felt that personal care of Jesus. And that's how he treats everybody.

These are the kinds of things we have to learn from Jesus if we're going to change our lives and follow him.

Just recently, Pope Francis, to his Sunday audience, spoke about one of the other things that Jesus really emphasized, and that is how important it is to reconcile with people and to bring about reconciliation in our community life, our family life, but in our international life.

We know that there's great danger right now. Last week, there was that false alarm where people in Hawaii thought they were under attack from a nuclear weapon. For 38 minutes, they lived in terror thinking it was going to happen and it could have been because there are tensions in the world.

Our nation and other nations are armed and have an intention to use the weapons. It's been declared clearly. That's so against Jesus. "You may have heard," he said, "the command, 'Thou shall not kill,' but I say to you do not even be angry with your brother or sister. If someone has something against you, and even if you're going to the altar to offer your gift and there you remember, go back and be reconciled. Only then come and offer your gift."

That's what Pope Francis was appealing to us to do a couple of Sundays ago when he was asking this question: "Is it possible to walk the path of peace? Can we get out of this spiral of sorrow and death? Can we learn once again to walk and live in the ways of peace? Yes, it is possible for everyone! How I wish that all men and women of good will would look to the cross if only for a moment! There, we can see God's reply: Violence is not answered with violence; death is not answered with the language of death. In the silence of the cross, the uproar of weapons ceases and the language of reconciliation, forgiveness, dialogue and peace is spoken."

I hope that all of us would do what Pope Francis is asking: look at the cross and hear what Jesus is telling us, not just with his words, but with how he acted, "Father forgive them."

As Pope John Paul II put it, "Jesus' ways are always peace, forgiveness, and love. These are the way of Jesus, only these."

[Homily given at St. Clare of Montefalco Parish, Detroit. The transcripts of Bishop Thomas Gumbleton's homilies are posted weekly to NCRonline.org. Sign up here to receive an email alert when the latest homily is posted.]